Pretty Good Sure As You’re Born

Love him or not, he’s changed the landscape of Disneyland, bringing a theatrical flair to many of his projects that catch the attention of those who aren’t even riding the attraction. Consider: while Pirates of the Caribbean is regarded by many to be a pinnacle in theme park attraction design, has an exterior at Disneyland that is not engaging, even if beautiful. However, you can’t walk by Big Thunder Mountain or Splash Mountain without getting a show. Just standing still in the middle of Fantasyland at Disneyland, there is so much to see and hear, both big and small.

What has made Tony such a fan favorite? It isn’t just his talent and many accomplishments or that he worked his way up from the equivalent of the mailroom to be a star designer. It is that Tony is a fan himself, someone who has long demonstrated a genuine enthusiasm for making magic and telling stories, especially when it comes to Disney, but not only when it comes to Disney. Heck, even his own well-decorated home is legendary, being of his own design, having been featured in at least two legacy media publications, and Tony has graciously provided guided tours to people as their jaws dragged on the carpet and he regularly hosts a wide circle of friends (full disclosure… okay, gloating: including us) for viewings in his to-die-for home theater. Tony appreciates excellent design, showmanship, and clever use of use of technology wherever it is found, and he’ll talk with anyone and everyone about another park’s great attraction, or another studio’s engrossing film, or an experience they should try. He’s been accessible, friendly, generous with advice, and it doesn’t hurt that he’s media-friendly/savvy and adept at self-promotion. How very Disney.

Disney has not been “just a job” for Tony. As the late Imagineer and author Bruce Gordon said, Walt built Disneyland because he wanted one. Tony did projects because those projects allowed him – and us – to do things he’s always wanted to do: fly in the trench of the Death Star on a mission to ward off the evil Empire, visit the Laffin’ Place, escape a booby-trapped ancient temple with Indiana Jones.

Is there anyone from his generation whose name is more appropriate for a Main Street window?

My, Oh My, What a Wonderful Day

Friday, November 1 arrived and I donned the shirt my wife had ordered for me in anticipation of the window dedication.

Embroidered over the heart:

That’s a reference to Tony Baxter, and the late Bruce Gordon and John Stone, who were instrumental in the building of Splash Mountain, and the date Tony and Bruce took us on our first ride.

Having been to the Disneyland Resort as a guest literally thousands of times, there are some visits that stand out more than others, such as (in chronological order):

If I hadn’t been an original Splashtranaut, there’s a good chance this wouldn’t have been as special a day for us.

We were invited to use complimentary valet parking at the Grand Californian starting at 7:30 a.m., and we arrived promptly, right behind a vehicle with a personalized license plate I recognized as that of Tony’s longtime assistant and the Imagineer she married.

We checked in, got our wristbands and tickets, and gathered in the lobby, where people were catching up with each other. Guest Relations Cast Members (in signature plaid) escorted us to the Disneyland Main Gate. As we were walking through Downtown Disney, “Zip a Dee Do Dah” was playing as area music.

Once we were let in, we quickly made our way to the roped-off area where white wooden folding chairs were lined up facing the Magic Shop, where there was a lectern. To our left, there was a red velvet curtain covering what was sure to be the replica of the window. Above, the actual window itself was covered by a similar curtain.

We were sitting in the second center row.

A who’s who of Disneyland personalities was gathering, including songwriter Richard Sherman and his wife, and such retirees as Disneyland President Jack Lindquist, Walt Disney Imagineering chief Marty Sklar, and Disney Archivist Dave Smith. Film critic and author Leonard Maltin was there, as were some key voice actors, Imagineers, and friends and family of Tony. Fans and news media surrounded the invited guests. As I would throughout the day, I saw and greeted people I used to work with who are still working there. It’s always good to see them.

Kori was able to get a picture with Richard Sherman. 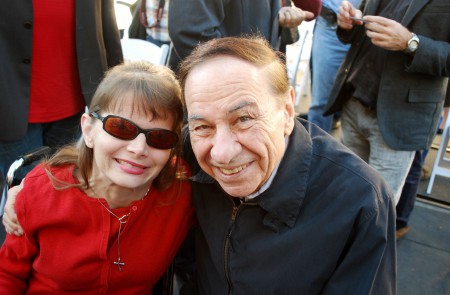