Did you know that on certain holidays, characters meet at the resorts at Disney World? On Easter and the week or so before Christmas, characters can be found at mostly the deluxe resorts wearing outfits that fit the holiday. This year, a few resorts including Port Orleans Riverside and Saratoga Springs had characters in patriotic outfits on Memorial Day and July 4 (they didn’t do this on Memorial Day last year because I was there, of course!) They also had Jester Mickey and Minnie at Port Orleans French Quarter on Mardi Gras this year (and I was THERE on that day but didn’t think it would be a character I hadn’t met yet…I’m still kicking myself!)

However, the biggest day for these character meets is Halloween. Last year, I planned my fall trip so I could visit several resorts to meet characters. You can find characters such as the Fab 5 in special outfits you won’t see anywhere else, and even some rare characters.

As with everything at Disney, this is subject to change, but here’s everything I know about meeting characters on Halloween. For a time, only a few resorts had characters on Halloween, but starting in 2012, every resort had characters for the holiday. Most resorts have it in their recreation guide (there’s also other activities at the resorts on Halloween), but others didn’t list anything at all. So even if a resort doesn’t list it this year, it’s possible they will still have characters out. The resort guides are for the month and so they can be found online. But, to give you an idea, last year they were out from 4-7 for most resorts, 6-9 at Port Orleans Riverside, and 4-8 at Boardwalk. The year before it was around that time too. Most of the Cast Members at the resorts didn’t know anything about the characters, including who would be out, times, or even that characters would be out at all! A few CMs tried to get information, but they couldn’t seem to find anything. So, I went by pictures I’ve seen online of who was out the year before, since most tend to stay about the same. Last year, there were two characters at each resort and they each had two half hour sets and then switched out. The year before, however, the two characters met together and there was no switching out, just breaks. So, again, it’s up in the air what will happen this year.

While you can use Disney transportation, it is MUCH easier to have a car to get around to the different resorts. Either rent a car or find a local friend who will be kind enough to drive you around in your quest for characters! 🙂 This is what I did, though my original plan was to get a cab after each resort! Or another suggestion is to stick to resorts close to each other, such as the Boardwalk resorts, the monorail resorts, or the All Star Resorts. You can also easily walk between Port Orleans French Quarter & Riverside as well as between Pop Century and Art of Animation.

Director Mickey at All Star Movies 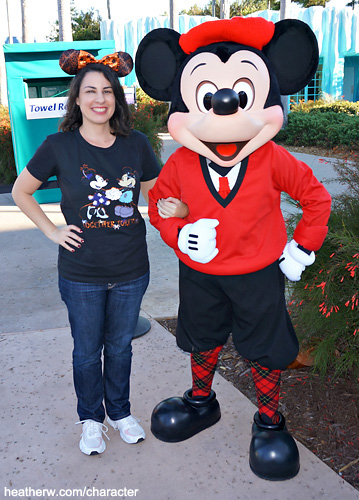 These are typical meet and greets so I never felt rushed (though I did want to be quick so I could get to other resorts). They will sign autographs and there was always a Cast Member with the character to take your picture. At one of the resorts, there was even a Photopass photographer. Since this isn’t that well known, and a lot of people are in the parks, the lines are generally short.

Now to the characters I got to meet last year:

I had seen pictures of Jester Mickey and Goofy meeting at Port Orleans French Quarter the year before, and knew I had to meet them. Since I was staying at Port Orleans Riverside this trip, it was an easy walk over. They were setting up other Halloween events, but no one knew exactly where the characters would meet. I just sat around the lobby, and thankfully that’s where they met, in front of the fountain. Goofy came out first, and I waited around for half an hour for Mickey. 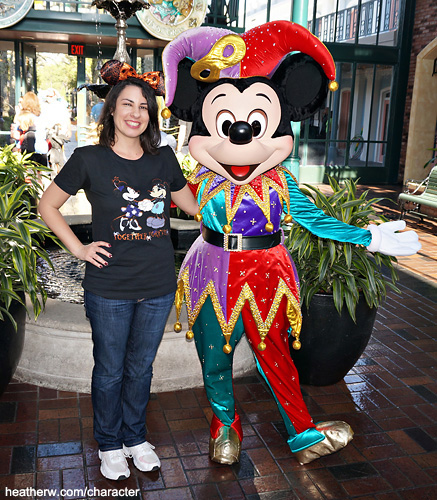 Then we jumped in the car and headed over to All Star Movies. Now, it’s probably smarter to stick around resorts that are close to each other for time purposes. But, again, I had seen pictures of costumes for Mickey & Minnie the previous year that I had to meet and so that was the priority. At All Star Movies, the characters were meeting next to the pool. Thankfully, we lucked into being the last ones to meet Minnie before her set ended, which really helped with the timing. And then we were able to jump back in line to meet Mickey.

Formal Minnie at All Star Movies 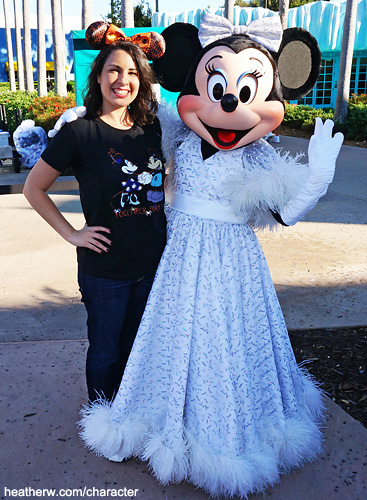 Next we headed over to Pop Century. In previous years, I had seen pictures of Minnie in different poodle skirts (one had Pluto on it instead of a poodle!) at Pop. Unfortunately, that’s not what she wore this year. However, I still thought her outfit was adorable and so I wasn’t upset at choosing to go to this resort. The characters were by the pool area, and meeting Minnie was easy. But, once she left, trying to meet Mickey was much more difficult. First he led a parade with the kids around the pool area and then joined a mini dance party over where he was supposed to be meeting, so that was a bit frustrating. The Cast Member actually had to pull him away from dancing because he was supposed to start meeting. He didn’t start meeting until eight minutes after the hour. 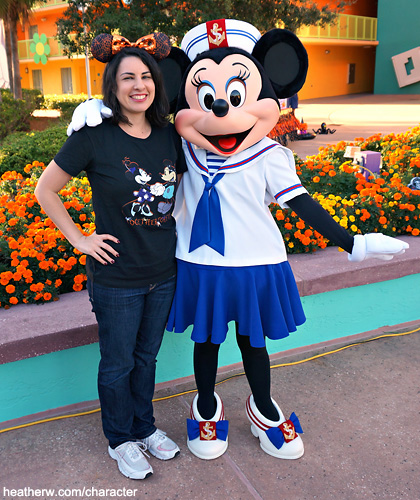 A friend who was also meeting the characters sent me a picture of an adorable Princess outfit for Minnie that I had never seen before, so I had to run over to Saratoga Springs for this. The year before at this resort, Minnie had met in another princess outfit — one that she has met in at several parties and events — and so this resort was never on my list until my friend sent the picture. Another reason to stay flexible with your plans because things can change. Also, another tip is that it helps to check social media to see what other characters are out. At Saratoga Springs, the characters were meeting by a fountain near the pool. I had just missed Prince Mickey (I’ve never met him in the outfit he wore here), but Minnie was the priority. This was also the resort that had a Photopass Photographer and so she took a bunch of poses. My only guess is that the DVC resorts have Photopass Photographers? 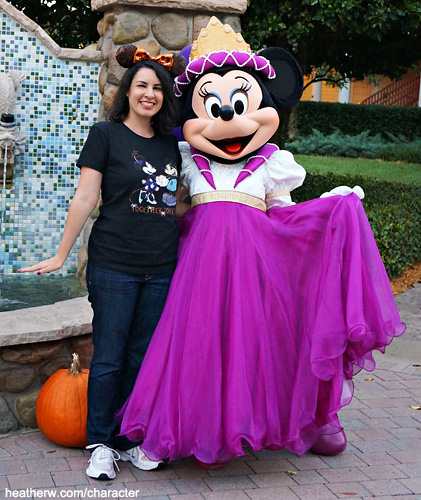 At this point, it was almost 7 and the only resorts where the characters were still meeting was Boardwalk and Riverside. I could have tried Boardwalkwhere Pirate Goofy and Minnie were meeting, but I didn’t want to take the chance of heading over there and not meeting the character I wanted (since I had met Pirate Goofy several times before.) So I went back to Riverside where Tiana and Louis were meeting. Even though I had met Louis once before, he’s rare character and one of my favorites. Since I was staying at Riverside, I was even able to run back to my room to get my book for them to sign and make it back to the lobby where they were meeting. Both characters had the longest lines of the day, probably because no one can turn down meeting a princess! 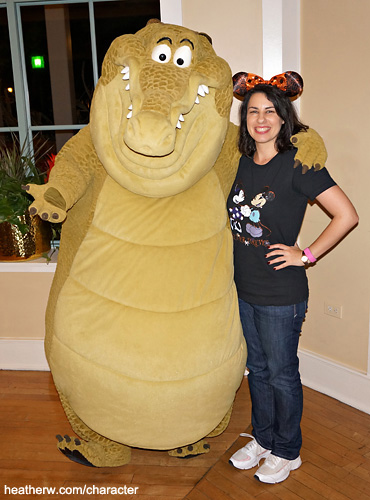 I really wish I was going to be at Disney World on Halloween again this year to meet more characters! Be sure to let us know who you find!

Heather is an Annual Passholder that loves coming up with excuses to take a trip to the World. Follow her adventures at Disney on Twitter, Instagram, and Facebook. Visit her website, I Love Characters, to see pictures of the over 240 characters she’s met at Disney World and Disneyland!: http://heatherw.com/character