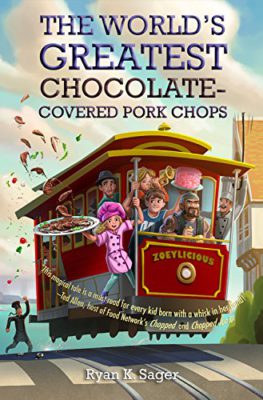 I’m pretty sure I gained ten pounds while reading The World’s Greatest Chocolate Covered Pork Chops by Ryan K. Sager. Like watching Pixar’s Ratatouille, the story frequently features food at the center and like Remy, Zoey is not afraid to experiment and try new things. She is also an unlikely little chef, a 14-year-old girl whose amazing cooking allows her to achieve the impossible.

The story starts with young Zoey convincing a banker to loan her $50,000 so she can start her own restaurant. Her persuasive attitude is able to get her parents on board and her best friend to be her head server. But trouble begins when she starts looking for a location to house her restaurant and when the proprietor of a prestigious Chinese restaurant blocks her from renting a space, she has to get creative.

Set in the heart of San Francisco, Sager uses his knowledge of the city and its various locales as ingredients in this winning recipe. The book is full of quirky and memorable characters and while the story is very different, I was often reminded of one of my favorite books from my childhood, Harriet the Spy by Louise Fitzhugh. As the front cover suggests, Zoey ultimately ends up holding her restaurant inside of a working trolly, which she calls “Zoeylicious.”

Zoey learns the hard way what it means to become an instant success. The logistics of running her business, going to school, and fulfilling best friends duties start to get to her. And when a competing restauranteur begins to sabotage Zoey in an effort to win the coveted Golden Toque award, she will learn that there’s a thin line between friends and enemies.

Perfect for upper elementary and middle school readers, Zoey is smart, ambitious, and funny. Kids will love her and the fun adventure her new business venture takes her on. There is no objectionable content, but expect your kids to be extra hungry while reading it. There are a few recipes at the back of the book, one of which is a joke and the others mostly mandate adults to prepare as they get quite complex. And yes, one of them is for pork chops with a chocolate mole sauce.

Disney Hyperion has another winner with Ryan K. Sager’s The World’s Greatest Chocolate Covered Pork Chops. It’s perfect for tweens looking for a fun summer read and is sure to inspire them to follow their dreams and work hard to achieve them. It’s also a great lesson in not trying to grow up too fast.