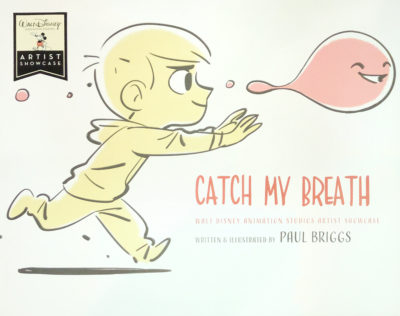 The Walt Disney Animation Studios Artist Showcase series began in 2014 to highlight the talented artists at the best animation studio in the world. These talented and creative individuals are given blank pages to fill and it’s always a treat to see what they do with it. In this fourth release in the series, Storyboard Artist Paul Briggs has written and illustrated a charming original story called Catch My Breath.

The star of Catch My Breath is a young boy who loves to run, but when his mom tells him to catch his breath his imagination runs wild. Under the belief that his breath has run away, he looks everywhere for it based on various puns about breath. Dog’s breath, breath of fresh air, bated breath, etc., all come into play in this whimsical story.

On the final page of the book, Briggs explains how this project came to be. He witnessed the birth of his sons and their first breath right around the same time he watched his mother take her last. With that, this idea was born and the book is dedicated to his mother and sons. If these last two pages don’t make you feel a lot of things, I don’t know what will.

Paul’s artistic direction with the project is reminiscent of what you see in deleted storyboard sequences on Blu-Ray releases of films he’s worked on, like Frozen and Big Hero 6 (Head of Story credits on both amazing films). He lets black outlines stand in for most of the backgrounds with color accentuating the areas your eyes should be drawn. The young boy is solid yellow, his run away breath bubblegum pink. While the colors stay inside the lines, they don’t always touch the lines, creating a charming esthetic and staying true to his craft.

What I love most about the Walt Disney Animation Studios Artist Showcase series (and the similarly titled Pixar sister series) is that it allows fans to connect with the creative geniuses making modern classics. Bob Iger isn’t beamed into out televisions every Saturday night to offer a glimpse into studio life the way Walt did and too many of these talented artists never get the public recognition they deserve. This is why I encourage all fans of Disney animation to support these releases and learn more about the artists.

Based on his IMDB page, Paul Briggs started at Disney on Hercules in the effects department and stayed in that department until Disney shut down 2D animation in 2004. After working in television animation for other studios, he returned to Disney in the story department on Bolt and has contributed to notable projects including Tangled, Winnie the Pooh, Frozen, Big Hero 6, and the Mickey Mouse short Get a Horse! In addition to lending visual and story talent to these films, he has also provided his grumbling voice to the bayou hillbilly Two Fingers in The Princess and the Frog and Marshmallow the snow monster in Frozen. You can keep up with all of Paul’s projects by following him on twitter: @_paul_briggs_ (“Only the coolest Twitter accounts use underscores” – @laughing_place).

Catch My Breath is now available and is a perfect story to share with your kids and a great way for Disney fans to get to know Paul and see firsthand the wonderful work that he does. I encourage you to also check out the other books in the series.