Welcome to Disney Extinct Attractions. My name is Cole, and I’ll be your sea captain on today’s look at a park that never was.

This week, it was announced that the village in Star Wars: Galaxy’s Edge is named Black Spire Outpost. “Coincidentally” enough, this town was also mentioned in Solo: A Star Wars Story as a place where Lando Calrissian spent some time in the past. Even though it was clearly a synergistic move, I do like that it has been subtly mentioned because it adds some credibility to the area when Galaxy’s Edge opens. Also, by mentioning it, but not showing it to us, it keeps the mystery alive for when we get to explore Batuu ourselves.

There has been a little controversy about the addition of Galaxy’s Edge to Disneyland. Some fans do not think that it fits into the overall narrative that Disneyland is trying to create, which I understand, but also Walt was all about promoting the projects in his arsenal, so I think it is fair to for Star Wars to become a major part of the park. However, some would have preferred it stay in a sister park like Disney California Adventure, but that park is out of land to expand on for all intents and purposes, so let’s take a look at another potential park in the Southern California area.

For the first 30 years of Disneyland’s history, Disney did not own the Disneyland Hotel. Instead, the Wrather Company had that joy, but when the company’s founder Jack Wrather died in 1984, Disney decided to seize the opportunity to acquire the company. Between 1987 and 1988, Disney managed to do just that and the Disneyland Hotel was finally theirs. 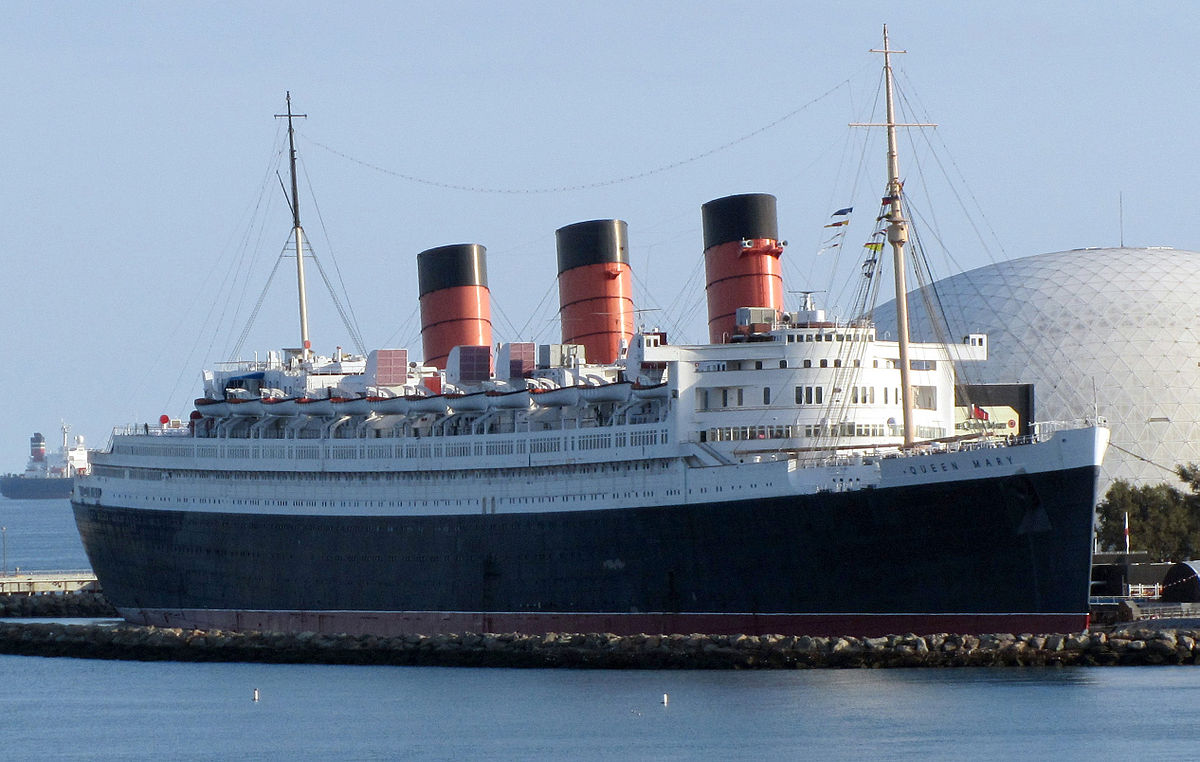 With this acquisition, the Disney Company was now also the proprietor of the RMS Queen Mary and the Spruce Goose, along with a lot of land associated with them in Long Beach, California. With Michael Eisner’s expansion-driven mindset, Imagineering began working on ideas for a new Disney Resort located on the 443 acres of land that Disney had acquired. 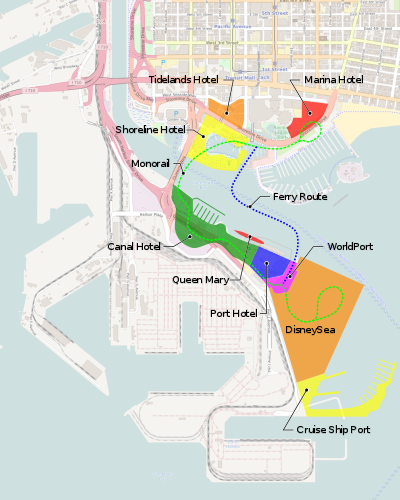 As you can see from the photo above, Port Disney had quite a bit going on. With its five hotels adding 3,900 rooms for guests, Long Beach’s total hotel capacity would have nearly doubled. Additionally, the WorldPort was going to be a small shopping and entertainment complex much in the way that Downtown Disney functions at the Disneyland Resort.

All of Port Disney was going to be a part of the port of Long Beach. As a portion of this port, there was a cruise ship port, so Disney would have had a place for their cruise line to come directly next to the resort, creating a great business opportunity.

Now all of the ancillary things are cool, but the real highlight of this resort was the theme park, DisneySea Long Beach. Just looking at the concept art above, this park looked so amazing, especially being located right against the ocean.

The giant ball-like structure in the center of the park was called Oceana. Inside Oceana, guests would have found a large aquarium and interactive exhibits like SeaBase in the Seas with Nemo & Friends pavilion. The area was also set to feature a simulator ride to provide an E-Ticket experience for guests. 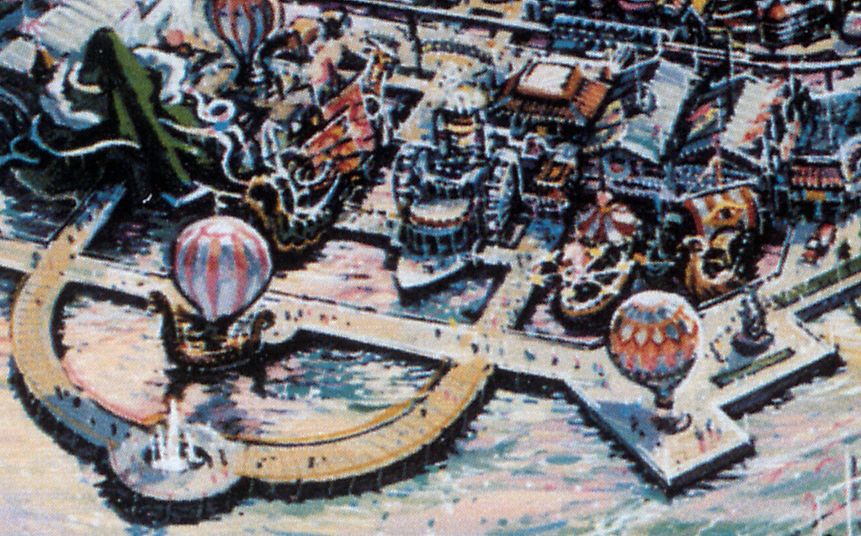 Another cool area of the park was the Boardwalk, which would have taken inspiration from boardwalks around the world, similar to how Paradise Pier originally was. Docked near this boardwalk, there would have been the Fleets of Fantasy with replicas of famous ships from around the world.

A couple of the other proposed lands were Hero’s Harbor, where guests could ride with Sinbad and other more mythical characters; Mysterious Island, where guests could ride an E-Ticket attraction that would put you face to face with a giant squid; and Venture Reefs, where daring guests could have a shark cage encounter with real sharks. All of these attractions sounded super thrilling and exciting to me, but we didn’t end up getting Port Disney, so let’s take a look at what went wrong. 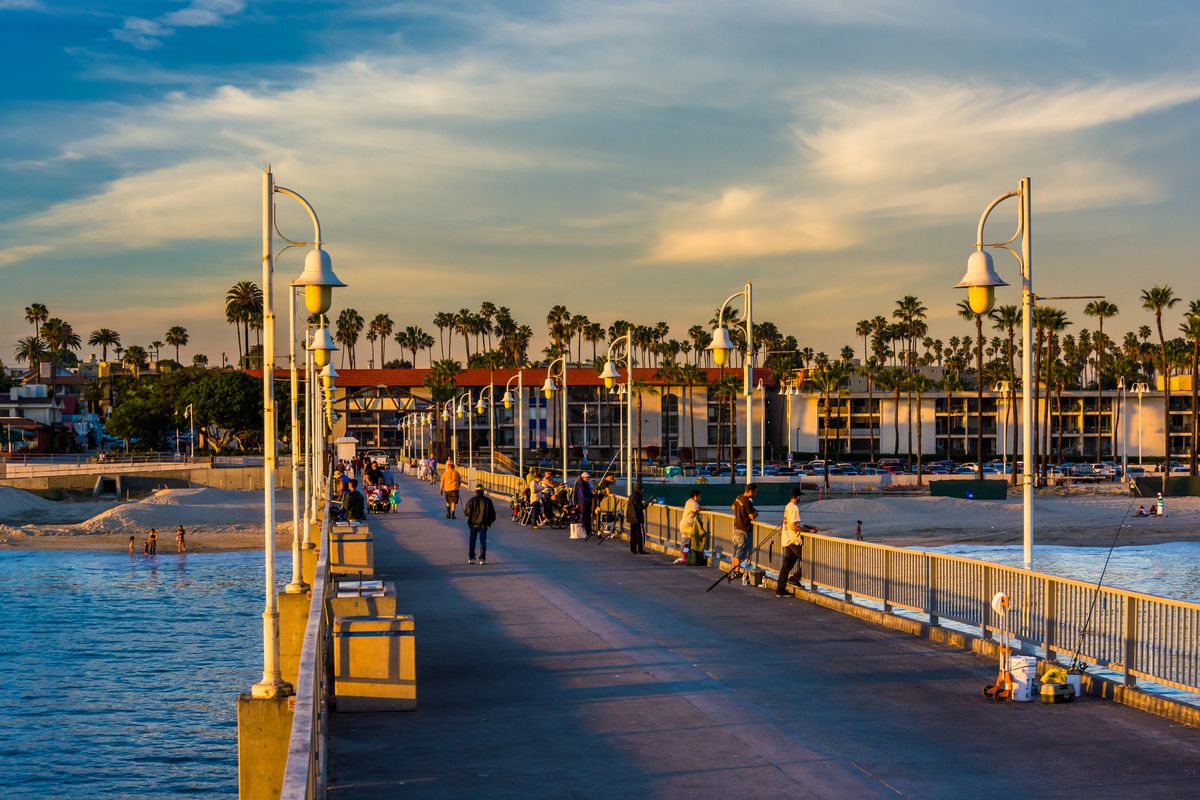 Disney officially announced the Port Disney project publicly on July 31, 1990. Initially, Long Beach was gung ho on the idea as it was in a “war” with Anaheim to determine which location would get a theme park. Anaheim was trying to add a second gate to the Disneyland Resort, WestCOT, and the Disney Company only had the money to make one of the parks.

However, Long Beach seemed to be winning with a 2000 opening announced, as well as a major expansion planned for 2010. But with bold plans like that, the park would have cost about $1 billion to produce. Also, as is prone to happen with a new theme park announcement, the residents of Long Beach were concerned because of the $2 billion needed to fix the infrastructure of the area to allow so many cars through. A lot of land was also set to be displaced, so neither Disney nor the residents were excited about the negative environmental impacts (and the costs that came with them).

What really ended up killing Port Disney was the failure of EuroDisney upon its initial opening. The resort’s lack of success led to tough times for the entire company, but eventually things turned around, and today Disneyland Paris is modest success.

The damage was done for Port Disney, though, with the resort officially being cancelled in December 1991. The Company continued to explore the idea of WestCOT for a few years after that, but eventually the financial turmoil was too much, so we got Disney California Adventure instead.

Luckily, the ideas for DisneySea Long Beach did not go to waste, being utilized in arguably the greatest theme park ever built, Tokyo DisneySea. I have never been there, but I have only heard the most amazing things, so you know that I’ll make it there sometime in the next few years. Many of the aspects for Long Beach made it into the Tokyo version, the most notable of which I’ll point out below. 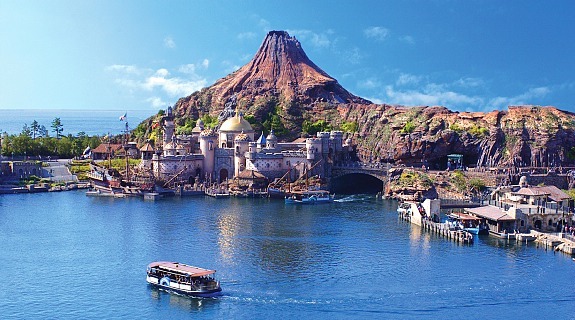 Mysterious Island actually managed to keep its name in the transition. Inside and around the volcano, you can find Journey to the Center of the Earth and 20,000 Leagues Under the Sea, both of which were inspired by the E-Ticket attraction proposed for Long Beach.

Via In the Wrong Boots

The Boardwalk and Fleets of Fantasy both inspired the American Waterfront section of the park. In the back of the picture above, you can even see the S. S. Columbia, which looks an awful lot like the Queen Mary.

Finally, Hero’s Harbor found a home in Tokyo DisneySea with the attraction’s Sinbad’s Storybook Voyage. I have only heard fantastic things about this attraction, too, so losing out on these amazing experiences makes me so sad that we were not able to get DisneySea Long Beach because I would have been there all the time. Fortunately, one of the ideas for Port Disney did actually manage to make its way to Long Beach. 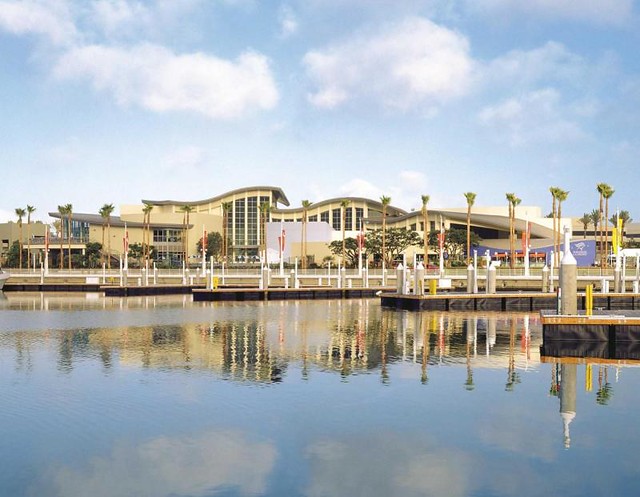 Via Aquarium of the Pacific

Surprisingly, Long Beach did not have a major aquarium even with its prime location right along the beach. With Port Disney not happening, the idea from Oceana of having a major aquarium gained some traction, so the Aquarium of the Pacific opened to the public in 1998. Today, it opens its arms to over 1.5 million visitors, making it one of the five most frequented aquariums in the country.

All in all, while I’m sad that we didn’t get Port Disney, I’m glad that many of its major aspects can still be found around the world today. Plus, Disney California Adventure is pretty awesome today, so I think things worked out for the best in the long-run. That brings today’s journey to a close, so look below for your clues to next week’s article.