The Fabulous Disney Babe
Page 1 of 2

by Michelle Smith (archives)
August 30, 2002
Fab continues her Beauty and the Beast discussion and talks about changes at The Disney Channel. 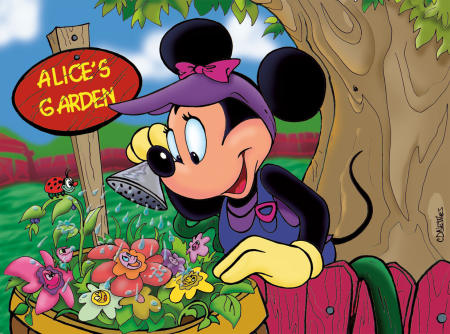 Carole Mumford checked in: David is still working through his chemo. I remember from my brother Jim's chemo and radiation treatments long, miserable sessions. David gets through these by listening to Disney audio, mostly rarities sent by a dear friend and brilliant Disney artist. I've dug up some stuff and am burning it on to CDs for him. If you'd like to contribute, email me.

She also mentioned her disappointment - and asked me to talk about - the big changes going on with the Disney Channel - it does seem to be going "all Zoog". Being in close proximity to Rebekah more than twice a year is turning me into one of those annoying "glass is half full" people, however. Playhouse Disney is breaking off into its own channel - preschoolers aren't up in the wee small hours - usually - so that might mean a new home for our Vault Disney favorites, which the Disney Channel is shooing off in favor of more Zoog/Tween programming, which is proving to be a HUGE hit. They have a completely captive audience: Nick skews too young, Cartoon Network too young or too old, and N (formerly Noggin) is struggling to find its niche with kids. This is going to be the first time since its inception, iirc, that the Disney Channel will not have some version of Disneyland/Walt Disney Presents/Wonderful World of Color/Wonderful World of Disney.  I think, personally, as many others have noted: they should call it the Zoog Disney Channel and take the mouse ears off the logo, and move the actual Disney content, such as the Walt shows, classic movies and theme park specials, Zorro and the Mickey Mouse Club, to night shift at Playhouse a la the successful TV Land/Nick at Night switchover from Nickelodeon. Then again, why give out the milk when you're strongly considering selling the cow? Look for much of the missing overnight content on DVD little by little over the next 24 months.

An historic overview of Fred Moore's animation career at Disney and Lantz. Cartoons include PUPPY LOVE, THREE LITTLE WOLVES, WATERCOLOR OF BRAZIL, ALL THE CATS JOIN IN, THE MAD HATTER, PIXIE PICNIC and a couple of other surprise cartoons.

The show will comprise about ten short films with a bit of discussion regarding Moore's animation, his drawing, his alcoholism and how he was regarded by his contemporaries. In Moore's day alcoholism was regarded as a character flaw, not a disease, as it is generally regarded today. For instance, Walter Lantz had no problem with Moore's drinking, and even joked about it, while Frank Thomas didn't speak to Fred for many years because of what he regarded as a sign of Moore's degeneracy. Moore deserves to be better known today, his drawing style was what Thomas, Johnston, Kimball, Larson, Milt Kahl and others were weaned on.