by Marc Borrelli
May 17, 2001
A report from Tokyo, in words and 34 pictures, of March 15th's spectacular and touching farewell performance of Fantillusion!

After a day of light attendance (20 minute wait for Space Mountain and 40 minutes for Splash Mountain, for example) the night came and the crowd hit like a ton of bricks. Train after train - car after car, the fans made their way by the light of the setting sun to Tokyo Disneyland. It was their last chance to say "Sayonara Fantillusion!".

There was no way to avoid knowing that May 15th would bring an end to this parade's unceasingly popular seven year run at Tokyo Disneyland (now it's off to Disneyland Paris). Television commercials and a multitude of posters in hundreds of Japan Railway stations had made it clear for months. But I wonder if much of it was really necessary. Fantillusion! is a beloved spectacle to countless fans. They would have known.

The numbers are astounding. The 31 floats and the 88 unique costumes worn by its 160 performers feature over 1 million lights and 1000 miles of fiber optic cable... Fantillusion!, the first endeavour to include contributions from the creative teams of all four Disney park locations around the world truly is a spectacle. Its cohesive three part storyline of good verses evil along with its surprisingly elaborate floats (many of which mechanically transform before guests eyes), and an orchestral score by Bruce Healey (Fantasmic!, Believe... There's Magic in the Stars, etc.), elevate Fantillusion! beyond the level of a normal parade.

On these 9 pages you'll find 34 pictures from Fantillusion's May 15th farewell performance. They don't begin to do justice to the real thing. Beside their mechanical transformations, the floats also perform numerous impressive color changes which can't be conveyed in pictures, and unfortunately, the costumed characters who perform on and between the floats, although quite visible to the naked eye, do not photograph well... But these pictures will take you form start to finish - From "Mickey's Magical Garden" when he brings the "Disney Light", to "The Disney Villains" and their attempt to steal the show, to the Disney princes and princesses arrival to save the day (or in this case - night) in "The Happy Ending". 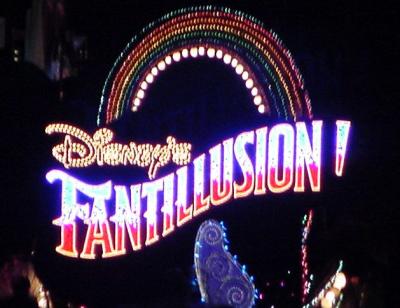 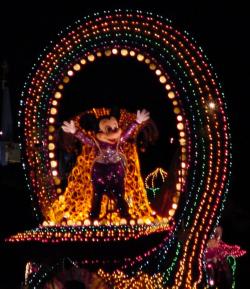 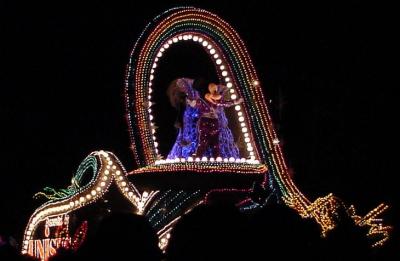