by Lee MacDonald
March 4, 2002
Lee MacDonald continues his tour of the new Paris park with a look at the Animation Courtyard.

If you missed it, Part One and Part Two are still available.

The second of the three districts of Walt Disney Studios Park (WDSP) is the Production Courtyard. It is the most expansive in area and is the only area where I felt disappointed in the execution of the attractions roster. The Courtyard offers the one true “dark horse” of the Studios, CineMagique but also fails to deliver in the tepid Studio Tram Tour and the incomplete Television Production Tour. However, the added touch of “La Terrasse” offers a mouth-watering teaser of a future project that ultimately must be one of the worst-kept secrets at Imagineering. 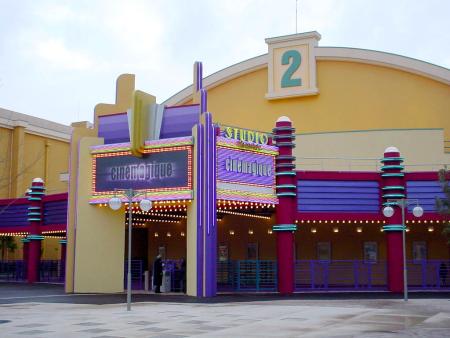 CineMagique is located in Soundstage 2 in the Production Courtyard
Click here for a much larger version of this picture
(1024 X 768, 142,864 bytes)

CineMagique
The secrecy surrounding this movie-based attraction has been intense as the production was recorded on various soundstages at the Studios in Burbank. None of the footage was shot in France and therefore there had been very few leaked stories circulating around the DLRP fans. The filmcan actually arrived late from Burbank and therefore the cast members involved should be praised for ensuring that the first official guests to the park could experience Soundstage Two.

The theater is fronted with a canopy of lights. The queue area is in two outdoor pens and the attraction has no pre-show. An identical clone of the Animagique theater, the plush interior features stadium seating in front of an expansive stage. I would suggest that you skip the rest of this section, unless you want to know more about the show itself.

The show begins with a cast member in one of the lower aisles introducing the show and running through the usual Disney welcome and safety blurb. However, as the lights dim, a cell phone can be heard ringing and all eyes focus on a gentleman crouching in one of the aisles. The cast member asks the man to cease the conversation, but he shrugs her off and hurtles up onto the stage as the screen flickers to life. The scene is of a sorcerer’s lair, filmed in black-and-white without sound. The sorcerer appears with a young man and a girl. The sorcerer is played by Alan Cumming, the English actor who has appeared in numerous Hollywood movies including Spy Kids and Josie & the Pussycats. The actors on screen suddenly notice the interruption on stage, and the rude gent is still nattering away on his cell, but with a touch of magic and smoke, the irritated sorcerer transports the man into the movie. Throughout the call, the man had his back to the audience, but once he appears “inside” the film, the man is unmistakably, Martin Short, the Canadian actor who is no freshman to Disney projects having lent his comic talent to movies such as Three Fugitives and the remake of Father of the Bride and until recently was a leading actor in Disney MGM Studios’ fantastic and sorely missed Monster Sound Show Presented by Sony prior to both 101 Dalmatians and currently, Drew Carey’s Sounds Dangerous setting up home at the Studios.