by Greg Maletic (archives)
November 29, 2007
Greg goes into details from his recent trip to Walt Disney World including his likes and dislikes, surprises and disappointments. Part one covers the Magic Kingdom including Monsters, Inc. Laugh Floor, Haunted Mansion changes, Pirates changes, overall impressions and much more.

I had the pleasure of visiting Walt Disney World for five days back at the end of September. I jotted these notes down on the plane ride home, but just got around to organizing them. Apologies for going with an Internet-friendly list rather than a complete essay: it was easier to write this way, and, given that you people reading this know as much as or more about the parks than I do, a more direct approach seemed appropriate. For those wanting something a little more article-ish, you'll get more context and analysis in the second part of this report.
This first half is completely devoted to thoughts about the Magic Kingdom; the second half will discuss the other parks, as well as the resort as a whole, dining, lodging, etc. So I don't come off sounding too negative, let me state up front that we had a great time, and I loved every minute. (Well, almost every minute.) Negative stuff is easier to write about--and more noteworthy--so some of these points will come off sounding that way. Overall, however, it was a great time.
Let's start off with... 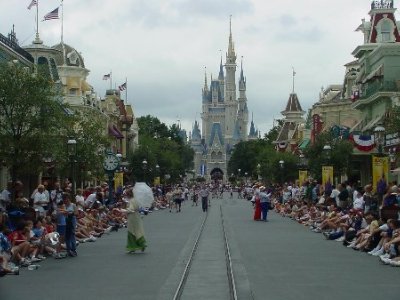 Cleanliness and upkeep.
The Net community acts like maintenance and upkeep at Disney World are travesties; for the second trip in a row, I don't see it. Or, at least, the park doesn't seem different to me than Disneyland in this regard. Attractions seemed in good condition; in particular, when I got up from a half-hour session of sitting on the pavement in front of Cinderella Castle while watching Wishes, the ground seemed spotless. I can't think of many places in the world where I could sit on a street--even at an amusement park--and not feel like I'd gotten dirty in the process.
The best rides in the park, according to me.
Every time I visit one of the Disney parks, a different ride manages to be my favorite. Not this time, however: the two standout attractions for me in the Magic Kingdom are the same this time as last. Space Mountain is not only my favorite rendition of the ride anywhere; it's the best roller coaster in any Disney park, period. The thing is just plain fun. Expedition: Everest is definitely well-done, but if I had to pick one to ride on, I'd pick the Tomorrowland ride. And the Swiss Family Robinson Treehouse...so beautiful. The foliage surrounding the tree is amazingly lush; viewed from any angle it's a spectacular sight. Overall the attraction seemed well-maintained, the only exception being the bamboo trough delivering water to the rest of the house that seemed blocked by leaves. Winning a night in Cinderella Castle would be fantastic, but I'd be just as excited to earn a night sleeping here. This attraction, more than any other, reminds me of what a Disney park is supposed to feel like.