by Doug Marsh
November 3, 2008
Doug attends the August 20th Celebration and Thanksgiving for the life of Disney Legend Harriet Burns who passed away earlier this year. 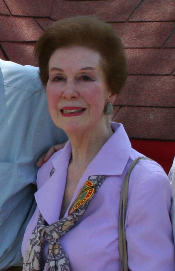 On what would have been her 80th birthday, family, friends and colleagues of Harriet Burns gathered to celebrate her life, and give thanks for all she had accomplished. The setting, All Saints-by-the-Sea Episcopal Church in Santa Barbara, was just as Harriet would have wanted; lovely, tasteful, and with beautiful attention to detail. The simple, dark interior was enlivened by vivid windows of stained glass, visual storytellers in sparkling colors. Simple floral arrangements adorned the front of the sanctuary, as quiet organ music provided a background for murmured conversation in the crowd. 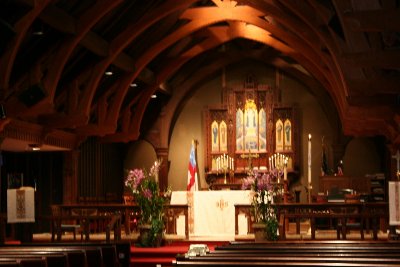 The front rows were a virtual Who’s Who of those who work behind the scenes to create the magic that enlivened the Disney theme parks. Among them were Marty Sklar, X Atencio, Alice Davis, Bob Gurr, Blaine Gibson, Rolly Crump, Joe Rhode, and Tony Baxter.

The traditional Episcopal service was begun with the tolling of the church bell. There were eight clear notes, one for each decade of Harriet’s life. The priest, the Rev. Dr. Jeffrey L. Bullock, began with familiar words: “I am Resurrection and I am Life, says the Lord. Whoever has faith in me shall have life, even though he die. And everyone who has life, and has committed himself to me in faith, shall not die for ever.”

After prayer, the old hymn “Amazing Grace” was offered by Harriet’s Goddaughter, Joanne Campbell, accompanied by her sister, Wilma Draves. The rendition began with a few simple notes on the piano, with Campbell’s clear, crisp voice joining in. The two then blended into the familiar anthem, ending on a triumphant note in the final stanza.

Another sister, Suzie Mostoller, then read Harriet’s favorite passage of scripture, the 23rd Psalm: “The Lord is my shepherd, I shall not want…” Scott Campbell offered a reading from the book of Romans. 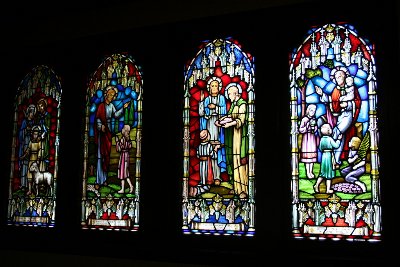 It would take more than one person to offer Words of Reflection on the life and work of Harriet Burns. There were three on hand, each offering their own perspective.