So what does this all have to do with Africa?

Well, the mid -1980s were a pretty tough time for the Walt Disney Company. A period when the corporation really didn't have a whole lot of dough to throw around. Oh sure, Eisner & Co. could scrap up the cash necessary to produce a flashy new show like Captain Eo or build a cutting edge attraction like Star Tours - something that was guaranteed to drive up attendance at Disneyland or Walt Disney World.

But a safe, somewhat stodgy addition to World Showcase like the proposed equatorial Africa pavilion - something that had no thrill rides that could be used to lure vacationers back to Orlando - wasn't really considered that high a priority by the Mouse House's new management team. If some corporate sponsor were to come forward and offer to shoulder most of the cost of constructing the place, then sure, maybe then Epcot's Africa would finally get off the drawing board.

But therein lies the real problem, folks. In the eight years that Epcot had been in active development prior to its 1982 opening, the Imagineers had never been able to find a suitable sponsor for World Showcase's proposed Africa pavilion. Disney's financial people had met with literally dozens of corporations with strong ties to the dark continent. But there didn't seem to be a single firm that wanted to put up the $25 - $30 million necessary to underwrite the initial cost of constructing and operating this Epcot addition.

Over the past 10-15 years, I have spoken with several senior Imagineers who have told me that there were actually a number of companies who came forward and actually offered to pick up the full construction costs of Epcot's African pavilion. Unfortunately, all of these firms were based out of South Africa.

Why should this have made a difference? Well, given South Africa's notorious racial policies (particularly its embrace of apartheid, which didn't really end 'til the country's first official democratic election in April 1994), there was just no way that the Walt Disney Company of the mid-to-late 1980s could have ever agreed to accept money from any corporation that was based out of that country.

So - much as it pained Mickey to do it - the Disney Corporation had to turn down all sponsorship offers from South African companies. All the while the Mouse kept beating the bushes, hoping that a more socially acceptable company would come forward and offer to pay for the construction and operation of World Showcase's proposed Africa pavilion.

But Disney's dream sponsor never appeared. Which is why the plans for Epcot's African pavilion laid on the shelf, gathering dust at WDI while lesser World Showcase additions - Morocco in September 1984 and Norway in May 1988 - made their debuts.

As the years dragged on and it became more and more apparent that the Walt Disney Company was not going forward with construction of Epcot's Africa pavilion, it was hard to tell who was the most disappointed: Alex Haley, who'd devoted two years of his life to writing and researching the "Africa Rediscovered" show that was to have been the centerpiece of this World Showcase addition; or legendary Imagineers Ken Anderson and Herbie Ryman, who arguably did some of their very best design work on the interior and exterior of this proposed pavilion.

Sadly, the trio of men who worked together to make Epcot's Africa a memorable place to visit aren't with us anymore. Herbie went first - felled by cancer in February 1989. Alex followed with a heart attack in February 1992. Ken was gone just a year later.

What remains of Disney's plans for an equatorial Africa pavilion for Epcot now? Other than a few paintings scattered among some Disney history books, there's really not all that much to see. To be honest, the Mouse's marketing staff doesn't like talking about Epcot's proposed Africa pavilion nowadays. It's considered sort of a sore spot with senior company officials - as if they're embarrassed by the idea that World Showcase fails to include any representation of a continent that's four times the size of the United States.

Wait? Did I say that there was no representation of Africa in Epcot? If I did, then I was wrong. Sort of.

For - if you were to make the long trek around World Showcase today to visit the site where Epcot's African pavilion was to have been built (That large green space between China and Germany) - you'd find something African themed here that the Walt Disney Company actually felt comfortable with building. 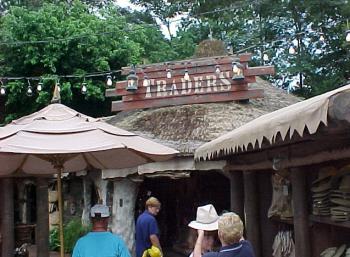 This establishment - the Village Traders - has been selling essential provisions (I.E. cold drinks, sun screen, big floppy hats and Lion King plush) to Epcot visitors ever since November of 1993. Though - to be honest - a lot of tourists who stroll past this small World Showcase building don't seem to realize that the shop is supposed to have an African theme. These days - particularly on the heels of CBS's hit reality TV series, Survivor II - most WDW guests seem to think that the place is supposed to represent Australia.

This whole story just makes me sad, folks. To think about all the effort Haley, Anderson and Ryman put into creating this proposed World Showcase addition - only to have Epcot's Africa pavilion wither on the vine because Disney couldn't find a socially acceptable corporation to sponsor the pavilion.

So - in honor of all the hard work and artistry that these three men put into their plans for this place - I'm going to take LaughingPlace.com readers on a little trip later this week. Join me here on Thursday and you'll get to see what Danny Kaye and Alex Haley should have been able to see in October 1983: Epcot's Africa pavilion - just as Alex, Ken and Herbie intended the place to be.

COMING SOON: A tour of Epcot's proposed Africa pavilion. Come climb up into the treehouse and peer down into the watering hole. Feel the rhythm of the "Heartbeat of Africa" as well as go on a sound safari. Also - learn why Disney's Animal Kingdom (more importantly, Disney's recently opened Animal Kingdom Lodge) means that World Showcase will never get its own African pavilion now.