Encounter at the Theme Building
Page 2 of 6

Marc: How did Encounter initially come about?  It seems so much like one of those cool things that should happen, but rarely does.

Eddie: It originated with an imagineer named Stuart Bailey. He had heard of a design competition where we could help CA1, an airport concessionaire to win the contract to redo the "Jetson-esque" 1961 landmark restaurant in the heart of LAX. (Walt Disney) Attractions was interested, as the deal with CA1 was wide ranging and more than a redo of a facility. They could sponsor "Area Attraction" info booths to sell tickets to the parks from inside the International terminal as part of the design project. We won the restaurant competition for CA1, but the parks decided not to go ahead with sponsoring info booths in the terminals.

Marc: Tens of thousands of tourists a day pass through that terminal and is has a lot of unused space... The sponsorship sounds like a good idea. Do you know why backed away from the it?

Marc: I'm surprised. It sort of reminds me of the arrangement at Tokyo Station, where there's a Tokyo Disneyland ticket location near the exits of the Shinkansen (bullet train) platforms. They do a pretty amazing business. 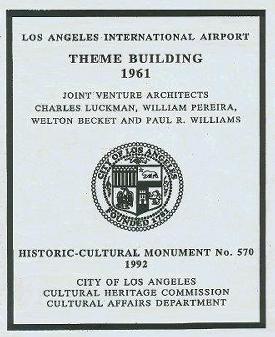 On December 18, 1992 the Los Angeles City Council designated the building a Cultural-Historical Monument.

Marc: Did the building's landmark status complicate things for you?

Eddie: We had to work within the interior space and not disturb the exterior elements. That was fine by me as I love the building. You cannot be reckless in your work and understand that the context of what you are creating on the inside will be viewed as the follow up to this historic design.

Marc: What was your biggest challenge?

Eddie: Once there was no direct benefit to the company, it was hard to justify the project of just doing a restaurant. The whole thing was going to die. The only one who believed it was the "right thing to do" at WDI was Marty Sklar and he backed our vision as we could show off our ability to do small jobs in a highly politicized arena and take design a bit further from the literal theme park stereotype. With his backing (and my promise to not spend too much time on it) it was pushed through.

Marc: I think it's too bad WDI hasn't undertaken more outside projects like Encounter. One mission of the Concept Development Studio you created at WDI (with the support of Marty Sklar) was to explore projects outside of the theme parks. Two great examples came out of it - Encounter and the ABC Times Square Studios (the subject of a future interview). Projects like those seem like a great way to spread the "magic" and also help to keep Imagineers productively employed during lulls between major projects. Why do you feel it hasn't been pursued?

Eddie: Actually there have been WDI projects outside of the parks, but they intentionally had little publicity. They did them for good reasons and one, as you stated, was during slow periods to keep the designers challenged.  The most noteworthy was the Gene Autry Western Heritage Museum. Sometimes WDI or its artists will contribute art or volunteer design services for a children's hospital or other worthy causes. They don't tout it as everyone would want their help and they could never fulfill all of the requests. There are many big hearted Imagineers and these projects show it.

Marc: Wow... That sounds like something worth looking into.