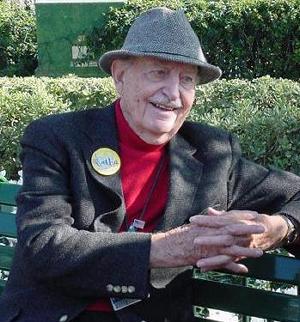 John Hench started with the Disney Company in 1939 in the story department. He later did artwork for Fantasia, Cinderella and Alice in Wonderland. In 1955 he was among the first Imagineers to be chosen to move to WED (now known as Walt Disney Imagineering) and work on Disneyland. He's often described as Walt's right hand man when it came to theme parks. In 1972 he was named Executive Vice President of WED. He's also known for paining the official portraits of Mickey Mouse for his 25th, 50th and 60th birthdays. In 1990 John Hench was named a Disney Legend and he continues to work for the Company to this day.

LaughingPlace.com had the opportunity to talk to John Hench following the December 5th ceremony for Walt's 100th Birthday at Disneyland.

LaughingPlace.com: How are you doing today?

John Hench: It's kind of emotional because this [Disneyland] was the most unknown and most difficult step for Walt to take. And he had such a record of being right about everything that we had confidence in it too, even if we didn't know why. It was criticized - some people wrote in papers and thought it was too far out. It was something brand new.

I worked on pictures before and I liked it, then Walt one day said he wanted me to work on this. So I commenced to work on this and I found it actually very much like a motion picture except for the timing. People take their own time here. In a film, of course, you have absolute control over what they're looking at and the timing because you manipulate the cuts and the way the film unfolds. But with this, people were on their own time. But actually Walt never wavered for a minute, he knew exactly what to do. Like this center here [he points to the hub], as families come in through the front there and they come down Main Street and here's where they need spaces because they stop a minute and they have children and they say "You kids go to Tomorrowland. We're going to go over there. And we'll all meet for lunch right there. Be there at 12." Here's where they make that plan and they need space because during the peak season there's more and more people coming in. So he put this in because he knew about this. No other park had ever functioned like this before

LP: Why did Walt know that while others didn't?

LP: What do you miss the most about Walt?

JH: Well I miss his enormous optimism. He would give me little lectures and pound me on things and keep impressing on me. I'd say "Are people going to appreciate this. We're spending on the money on this, this is a hard job to do." And he'd say "Listen, people are ok. Just understand that - people are ok! And you say they won't appreciate perfection. Well they will, they feel it."

LP: Are there any memories of Walt that stand out?

JH: They all stand out in a way. Of course he was a very expressive man. He didn't keep his thoughts to himself, he shared them with everybody. I traveled with him and he was always getting into something new and unusual. And again, regarding people, he studied people. He'd watch people, how they behaved. Even if we went into a new restaurant he would kind of walk in not like Walt Disney but like Joe Blow.

LP: Why do people feel such an attachment to Walt Disney?

JH: One thing is he was very effective when he appear on TV Sunday evenings. Because Walt was absolutely honest and he never said anything he didn't believe. And I think that somehow projected from the television,  that quality of when he said something you believed him. He wasn't like a salesman selling something he didn't believe in at all. Walt said something, they believed what he said. And they believed him because he projected that kind of honestly. And I know him never to say something that was written in the script that he didn't agree with.

Return to Table of Contents

Your Thoughts
What has Walt Disney meant to your life? What do you think Walt's greatest gift to the Company and the world was? What do you admire most about Walt Disney? Send your thoughts to [email protected] and we may include them on a future date. You can also discuss your thoughts with other LaughingPlace.com readers using the link below.