Report: John Canemaker, Frank and Ollie at the Los Angeles Museum of Art
Page 1 of 2

by Jeff in Orange County
February 5, 2002
A report on John Canemaker presentation at the Los Angeles County Museum of Art including comments by legendary animators Frank Thomas and Ollie Johnston.

On Saturday 2/2/2002, my wife and I went up to LACMA’s museum complex on Wilshire (Los Angeles County Museum of Art) and intended to have a relaxing Disney evening. LACMA has a continuing film and lecture series sponsored by the Studio on “Disney at 100: The Animated Classics” What we experienced I had to share. 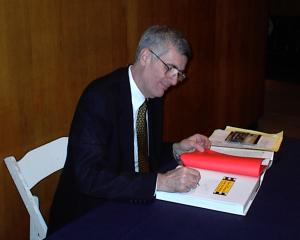 John Canemaker spoke at 5:00 on the topic of his new book Walt Disney's Nine Old Men. We not only were privileged to see slides of their work, but also clips and examples of their screen efforts. What a delight! John was fascinating to listen too in his reverence for what he was presenting. Then when it came to speak about Frank Thomas and Ollie Johnson, John let us know that the two Disney legends were there in the audience. Of course, having just seen a 5 minute clip of their work, they received a standing ovation.. [Frank’s Lady & Tramp Spaghetti scene defines romance for me!] They asked us not to have them sign anything afterwards and most respected them for their age and legend status. By the way, Frank was born in September and Ollie in October of 1912 making them both 89 years young! In conclusion, after having seen some of the best moments in classic animation on screen, Mr. Canemaker made the point very well that no matter where the modern magicians of animation take the art form, they will always be building on the art form developed almost exclusively by Walt’s Nine Old Men.

Afterward when we were in line to have our copies of his book signed, I found I was in line behind Margaret Kerry, A spunky pixie like grandma who let me and all around us know who she was and where she fit in Disney lore. She had been the standing model for Tinkerbell for Marc Davis! (For those of you with the book her pictures are on page 281). She let us know that she had been invited to the Studio this week for a screening of Return to Neverland. She said “I was more than mildly interested in who they had model for this version, but I was told “dear, we have you in the archives.” She told us another amusing story of her and her late husband going to see Peter Pan, the last time it was in theaters. She said it had been almost 40 years but when that little pixie came on the screen she couldn't help herself but she started pointing and whispering to all around her in the theatre, "That's me!" "M A R G A R E T", her husband whispered, as Tinkerbell was turning on the mirror up on the screen, “Of course it's you…I'd recognize those thighs anywhere!" She giggled and said that she had been in the business 68 years and had her first job when she was four, “so you figure it out!” 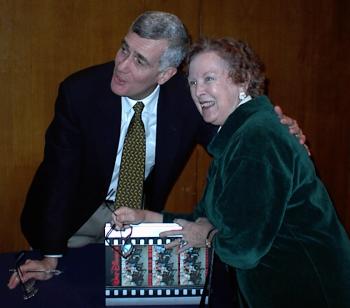 John Canemaker was gentle and kind with all in line and took his time with special personalities. Alice Davis got a special hug and attention and scattered applause from the room. Marty Sklar was in attendance sporting a cane and a limp from his bum knee. He let me know he is on the mend and not to worry.