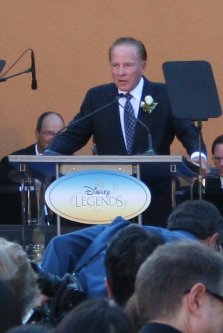 After thanking Bob Iger, Frank Gifford began his comments by saying that, like Barbara Walters, he really didn’t feel like a legend. “I kind of tie being a legend with being old and cranky and creaky,” he said, “And I don’t feel old and cranky and creaky.” He thanked many friends for attending the ceremony, and pointed out members of his family, including wife Kathy Lee Gifford.

Gifford again stated, “In all honesty, this is almost embarrassing, because I really do not feel like a legend.” He spoke of a legend who changed his life, Vince Lombardi. The coaching great met him early in his career, as he was considering leaving football. It was Lombardi who led him to New York, and his memorable career there. Gifford also spoke of another legend, Roone Arledge, the head of ABC Sports who created Monday Night Football.

Gifford spoke fondly of his two cohorts, Howard Cossell and Don Meredith. He recalled a particularly funny moment during a live broadcast from Houston. The Oilers were being thoroughly beaten by the Miami Dolphins. Arledge asked the broadcast trio to make the lopsided game more interesting for the viewers. Cossell responded with withering scorn for both teams, and Meredith simply dozed off. When the director focused on a sleepy little Oiler fan in the end zone, Gifford gratefully announced, “As you can see, this is not the most exciting game we’ve had this year.” No sooner were the words out of his mouth, than the little one awakened, stretched, and gave America half the peace sign. “Howard, for the first time in his career, I think, was stumped,” Gifford reported, but Meredith stirred and said “How about that Howard? They still think they’re number one!” 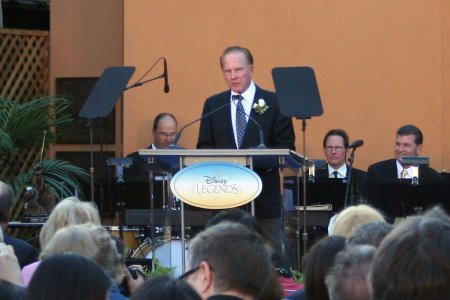 “We did have fun,” Gifford concluded. “I’m just so proud to be a part of what’s happening here tonight. I’m so proud to have been able to take the game that I played to another level because of Monday Night Football, and for that I feel that I made a contribution. Was I a legend? No. But thank you all for coming and being with us tonight and once again I’m so thankful my family is with me tonight and Bob, great to be with you again.”

Iger prefaced his introduction to the next Legend by noting that the Disney experience is universal. Making these dreams come true in Japan is Toshio Kagami, Representative Director, Chairman and CEO of the Oriental Land Company. In 1958, at the age of 22, Kagami joined the staff of the Keisei Electric Railway Company. In 1972, he was appointed Deputy Director of the real Estate Division of Oriental Land Company. The OLC, owned by Keisei, is charged to create large scale developments in land reclaimed from the ocean.

The OLC operates Tokyo Disneyland, opened in 1983, and Tokyo Disney Sea, which opened in 2001. “Here at Disney our greatest asset is our tradition,” said Iger. He noted that Kagami embraced the traditions established by the former CEO of the OLC Masatomo Takahashi and the former President of Disney, Frank Wells.

In accepting his Legend Award, Kagami first greeted the crowd in English, saying, “Good afternoon, ladies and gentlemen. It is a great pleasure and honor to receive this award.” Speaking through a translator, he expressed his further honor and pleasure to be the second executive from the Oriental Land Company to have been named a Disney Legend. Referring to Masatomo Takahashi, who received the award in 1998, Kagami said, “I think he smiles down in delight from heaven as we speak.” 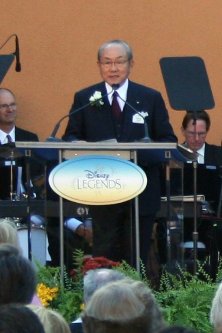 He spoke of three specific milestones: the opening of Tokyo Disneyland in 1983, the opening of Tokyo Disney Sea in 2001, and the recently concluded 25th Anniversary celebration. The Tokyo Disney Resort hosts 25 million guests each year, for a present total of 448 million, he stated with satisfaction. On a personal level he noted that he values his relationships with Disney friends and colleagues. He vowed to continue to pursue excellence as a Disney licensee, continuing to add value to this Disney Legend Award. He concluded by again expressing his utmost honor, saying, “Thank you very much, indeed.”

As Iger prepared to introduce the next presenter, he pointed out that the world wide theme parks were an important carrier of the Disney name. To represent the designers of those parks was Marty Sklar of Walt Disney Imagineering. Sklar began his comments by stating that Walt Disney always followed two ideals: timelessness of characters, and timeliness of cutting edge technology. Both of these are embodied in the work of Walt Disney Imagineering.