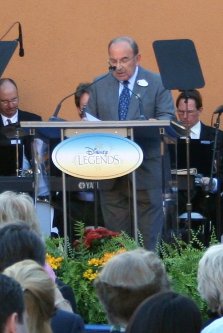 In introducing Dorthea Redmond, Sklar began by noting her delicate and expressive water color renderings. He quoted Disney artist and historian Stacia Martin: “A Dorthea Redmond watercolor painting is a wonder to behold. The exquisite detail coaxed from this elusive medium combines with a flawless sense of color and light to create not just illustrations, but living environments.” He went on to add, “All the great art directors wanted her design illustrations.”

Redmond’s early years working with David O. Selznick, Jean Renoir, Charles Chaplin and Alfred Hitchcock were detailed. After a stint with an architectural firm, she joined Disney in October of 1964. Working with John Hench, she transformed the Red Wagon Inn into the sumptuously appointed Plaza Inn. Work on New Orleans Square followed, with particular attention to the interiors of the never completed private apartment for Walt Disney himself. Last year, these designs were adapted for the Disneyland Dream Suite.

Redmond next contributed designs for Walt Disney World, working on Main Street, Fantasyland, and the international pavilions of the original EPCOT Center. Perhaps her best known work, suggested Sklar, are the series of elaborate murals in Cinderella’s Castle, murals that have been duplicated in Tokyo Disneyland. Although she retired from Disney in 1974, Sklar asserted, “Her work remains timelessly beautiful.” 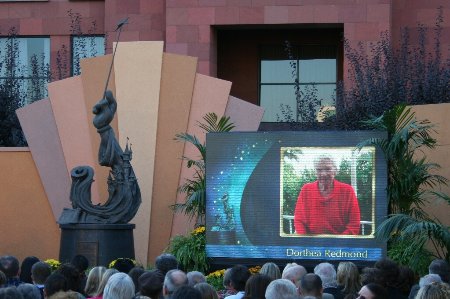 Accepting the award for Dorthea Redmond was her son, Lee. He introduced his mother, seated in the audience. “Those of you who know my mother,” he said, “Know her well enough to know that she is lively now.” He added, “She is never afraid to tell you what she thinks.” He acknowledged the number of family members that were present, concluding, “We all want to thank you very, very much.”

Sklar began his introduction of the next awardee by saying, “Oftentimes, a legendary skill is not showy.” He spoke of Bob Booth’s nearly three decades as a steady master of mechanical devices. After joining Disney in 1957, Booth was made supervisor of the Studio Machine Shop in 1962 by Disney Legend Roger Broggie. In 1965 he was charged to create MAPO, a research, development and manufacturing subsidiary. Sklar stated that MAPO would make everything from animated birds to monorail trains.

Although he retired in 1985, Booth had left a son behind as an Imagineer. Sklar concluded, “Artists and designers get a lot of attention in creating Disney Parks. The similarly innovative, creative and fascinating work of our manufacturing and production entities, and the work of steadfast guys like Bob Booth, often gets lost to the limelight. But without them, the dreams of the designers would never see the light of practical application.”

As Bob Booth took the lectern, he immediately pointed out that public speaking was not his forte. “I do want to acknowledge the fact that I got here by Roger Broggie, sr.,” he quickly added. He spoke of Broggie’s faith in him, having him set up MAPO’s facilities, never knowing that Walt Disney World was around the corner. He proudly spoke of making the designer’s dreams come true in three dimensions. He thanked the committee that determined the award, pointing out that because Disney is a design company, he had no idea this award could go to one involved in manufacturing. He again mentioned his debt to Roger Broggie and all the technicians who made his work possible, stating his desire to share the honor with them. “Thanks for having me here,” he concluded. 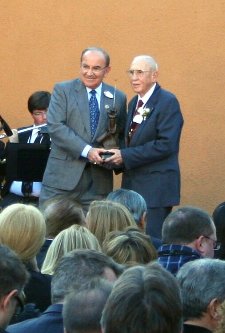 Sklar took the stage with the words, “Magic comes in a lot of forms.” Without the work of Bob Booth, Disney’s theme parks would not have been possible. He then turned to the next recepient, Neil Gallagher. “Our next honoree was a leader,” he said. Gallagher was a leader who always solicited ideas and the best from others.

His quest to build better animation in three dimensions began with Tiki birds and Mr. Lincoln. Following work on the World’s Fair projects, Gallagher traveled t o the site of Walt Disney World in Florida. From there he served Buena Vista Construction, then went on to Tokyo Disneyland. By 1983 he was back at Walt Disney World, serving as Vice President of Engineering and Construction. After completing work on Disney-MGM Studios in 1989, Gallagher’s next assignment took him to France to work on the Euro Disney Resort. His travels continued as he returned to Walt Disney World, finally retiring in 1994, having spent 37 years with the Walt Disney Company. Sadly, he died in 1995 of complications from a rare respiratory illness.

Sklar gestured to the audience as he said, “Please join me in acknowledging Neil’s wife, Doreen.” Accepting the Disney Legend Award were his three daughters, Mary Lynn, Shawn, and Kelly. They thanked the Disney Company for recognizing their father’s work with this honor. Visibly moved, they concluded, “This means so much. Thank you.” 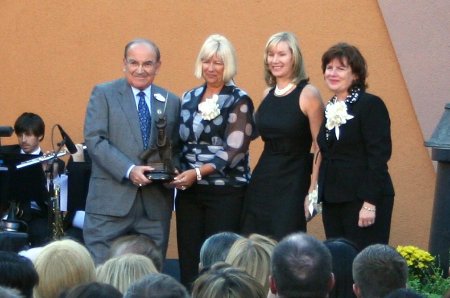 As Marty Sklar prepared to relinquish the lectern, he pointed out that he and the next presenter had a combined total of 87 years with Disney. And even though, “he’s a Trojan and I’m a Bruin,” Sklar was pleased to welcome Disney Studio head Dick Cook to the platform. As Cook stepped up to the microphone, he murmured, “87 years! You didn’t have to make us seem that old…”