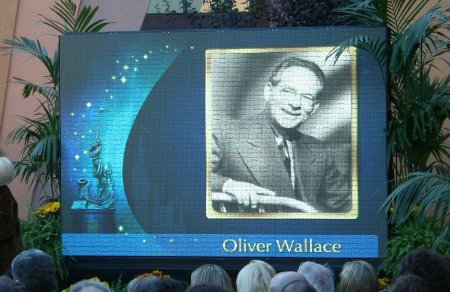 Cook noted that Wallace was still at work at the Disney Studios when he died in September of 1963. The award, he said, was long overdue. Accepting on behalf of her father was daughter Mary Wallace Rich.

As she took the stage, she said, “I hope I can get through this.” Brimming with pride, she stated that her family was so honored, and that there was great rejoicing in heaven. She ended with a statement of great thanks. 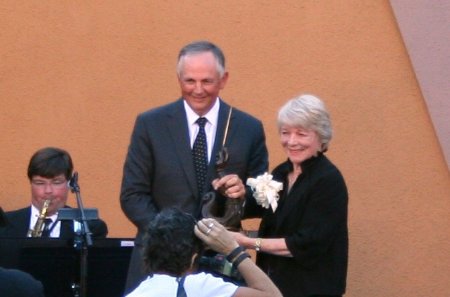 For the final two awards of the day, Cook began by saying that the romantic story of Wayne Allwine and Russi Taylor would seem too made up if it was not real. Cook first detailed Allwine’s background. Starting in high school, Allwine pursued a career in music before joining Disney in the mailroom in 1966. He moved on to the audio department, working for seven and a half years with the legendary Jimmy MacDonald. In 1977 Allwine won the role of Mickey Mouse in an open voice audition. He provides Mickey’s voice for Disney theme parks, movies, TV specials, records, and video games. “It was also in this role,” added Cook, “That he first met Russi Taylor.” 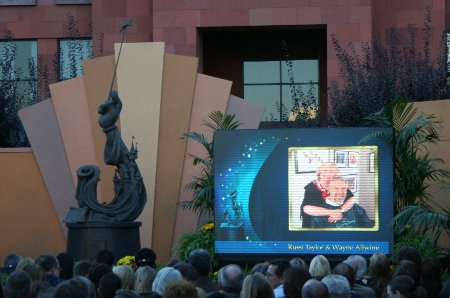 Taylor wanted to work at Disney from her childhood in Cambridge, Massachusetts. She was even able to express that desire to Walt Disney himself, meeting him at Disneyland. “Walt himself assured young Russi that her dream would come true,” Cook smiled. “That happened in 1986 when she won the coveted role in an audition that included nearly two hundred hopefuls. Taylor has been the official voice of Minnie Mouse ever since.” Other Disney voice work includes Donald’s nephews, Webigail Van der Quack in Duck Tales, and various characters in Tail Spin, The Little Mermaid, Buzz Lightyear of Star Command, and Kim Possible.

After working together as Disney’s famous pair, Allwine and Taylor found that a romance had grown. “Finally the two did something that Mickey and Minnie have yet to do—they got married,” said Cook to the appreciative crowd. They now embody the characters they portray. Allwine, Cook said, shares Mickey’s sense of fun, guilelessness, and optimism, while Taylor has Minnie’s strength, spirit and gentleness, with a certain sauciness that keeps her from being too sweet.