Cook also cited their devotion to the characters. Allwine, he said, considers himself the caretaker of a legacy, despite his thirty year’s of performing. Cook quoted Allwine: “It’s a great honor to keep alive what Walt loved so dearly, and what Jimmy MacDonald kept alive so well.” He then quoted Taylor: “I really want those that come after us to be aware of the history and the tradition, and to love the characters as much as we do.” Cook smiled as he concluded in his own words, “We at Disney, Mickey and Minnie, and the entire world are blessed and fortunate to have had the talents and conscience of Wayne Allwine and Russi Taylor for all these years.” They then came forward, accompanied by Mickey and Minnie themselves, to accept their awards. 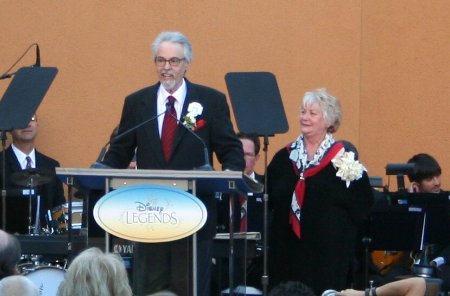 Allwine spoke first, greeting the crowd with a familiar, “Hiya folks!” He promised to keep his comments short, with the assurance that his wife would have more to say. He thanked his parents, he thanked his predecessor Jimmy MacDonald, and he thanked Walt Disney. “I’m just so grateful to be here,” he said, “And thank you guys on behalf of all of us.”

Taylor began by admitting she needed a script and a director, noting that there were writers and directors and friends all over the audience. She singled out her friends from Disney Character Voices and TV Animation for thanks. She continued, “I want to thank Walt Disney for keeping his promise to me years and years ago.” She expressed her appreciation to the selection committee, to her agent, but most of all to her husband, “The dearest thing that ever lived, the most precious person to me ever.” Allwine piped up to add a final thanks to all the friends and family who had joined them on this special day.

Bob Iger closed the day by thanking those in attendance for honoring the storied culture of the Walt Disney Company, noting, “A legacy is not a dusty relic, or an invocation to be mindlessly memorized. It is a living entity that must be nurtured and valued and passed on to those who follow us in this great organization.”