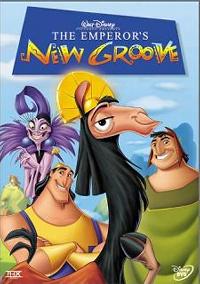 Disney's 39th animated feature is now available on video and on Disney DVD in two versions: the standard one disc DVD (reviewed below) and a deluxe two disc collector's edition set titled The Ultimate Groove, which will be reviewed next week.

Set in an unnamed Latin American empire, The Emperor's New Groove introduces us to the ruler of said domain, the spoiled-rotten Emperor Kuzco (voiced by David Spade). He leads an excessively charmed life where his every whim is catered to; as his 'theme song' states, it is his "perfect world." 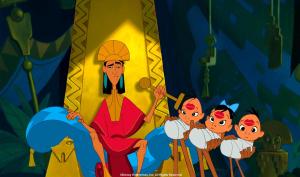 His pampered existence is threatened by the mutinous mechanizations of his recently fired royal advisor, the devious diva Yzma (Eartha Kitt). Aided by her studly side-kick Kronk (Patrick Warburton), her attempt to poison Kuzco in order to usurp his throne misfires, turning him into a llama instead.

Yzma dispatches Kronk to do away with the now furry and four-legged emperor. But instead Kuzco ends up with the kind-hearted llama herder Pacha (John Goodman), whom Kuzco had previously dismissed upon informing him that Pacha's simple mountain village was soon to be the site of his latest extravagance, a huge summer home dubbed 'Kuzcotopia'.

A tempestuous relationship develops between the mismatched duo as Pacha agrees to help Kuzco in exchange for sparing his village. Further problems arise when the newly enthroned Empress Yzma discovers that her former boss is still alive, thus threatening her rule of this 'kingdom of the sun'.

is enjoyable at most, and hilarious at times, but the film never quite takes off into the comic stratosphere of such earlier Disney comedies as Aladdin or even Hercules. Credit is due the filmmakers for shirking the tried-and-true (and often unjustly maligned) Disney 'formula', but it is at the expense of creating a full-blooded Disney entertainment.

While ostensibly taking place in a mythical kingdom in some South American country, one never gets a sense of place. Aside from the Aztec-influenced architecture of the palace, the film could be taking place in any mountainous region. Add to that it's suffering from what I call Dangerous Liaisons syndrome (a complete lack of any regional dialect or accents), and this venture feels no more authentically Latin then a Taco Bell.

Much has already been said of this film's troubled production. At first a more straight forward action film titled Kingdom of the Sun, with songs a la The Lion King, it stalled in mid-development due to insurmountable story problems. It was resurrected as The Emperor's New Groove, a full-out, non-singing buddy comedy. Lost in the shuffle were the songs written for the original story by Sting and David Hartley. (In fact, Trudie Styler - a.k.a. Mrs. Sting - filmed a documentary on this whole unfortunate process, unflatteringly titled The Sweat Box.) All that remains, save for the obligatory Oscar-bait power ballad sung by Sting over the end credits, is the splashy, Vegas-style opening number "Perfect World", crooned by underwear magnet Tom Jones as Kuzco's 'theme song guy'. This wackily over-the-top production number (complete with Riverdancing centurions) hints at how loony this toon could have been. While I'm not one to think that every animated film needs to be a musical, this story would have benefited especially if it had been musicalized more in this manner.

(To hear what 'might have been,' listen to the original soundtrack album, which features what will probably be the greatest Disney song never animated, Eartha Kitt purring "Snuff Out the Light (Yzma's Song)") 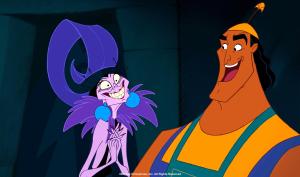 Such inadequacies are compounded by the main flaw within the feature, that is, a failure to create a likable protagonist. As it stands, Kuzco starts off as a self-centered, uncompromising childish brat and then ... remains that way for almost the entire film. He constantly belittles and betrays the trust of the honest and loyal Pacha. Yes, there needs to be dramatic conflict between the two, but by pitting Pacha's unwavering goodness against Kuzco's constant selfishness, it's no wonder he elicits no sympathy, from us the audience, or the other characters for that matter.

This may in part be due to the voice acting of David Spade, who as a performer on the television series' Saturday Night Live and Just Shoot Me has consistently displayed his limited range: he never met a line he didn't whine. Such one-note characterizations may work fine in a five minute comedy sketch or half-hour sitcom, but not when you are trying to create a hero worth rooting for.