Jim Hill: From the Archives
Page 1 of 7

by Jim Hill (archives)
April 5, 2001
Originally published in April 2000, The Greatest Performances You Never Got to Hear - Parts 3 and 4 looks at some Disney animation voice performances and appearances that almost, but didn't quite happen. Included this conclusion to the series are Hunchback of Notre Dame and Hercules.

Over the next few weeks LaughingPlace.com will publish many of Jim Hill's older columns done for another website in these "Jim Hill: From the Archives" columns. Today's edition was originally publised in April 2000.

The Greatest Performances You Never Got to Hear 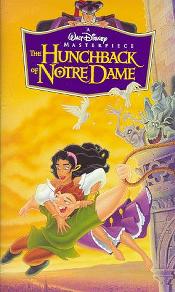 Part Three: Getting the Gargoyles right proves to be a gruesome go...

After you've read this article, Discuss It on the LaughingPlace.com Discussion Boards

How tough can it be to do the voicework for the comic relief in a Disney animated film?

I mean, what do you do? You show up at the studio, schmooze with the director, say a few jokes, take an hour for lunch, do a few more jokes, break for tea, do another couple of jokes, then -- Oops -- it's time to go home. The hardest part of the job would seem to be that long walk out to the mailbox, where you have to pick up that oversized check.

At least that's what people seem to think happens when actors are hired to do voices for Disney films. The reality of the job is considerably different,- particularly when you're working on a film that's in trouble.

Think of poor Cyndi Lauper. All her life this colorful pop star had wanted to be in an animated film for Disney. Whenever she went to one of the studio's film openings or attended a Disneyland press event with her family Lauper would badger company executives repeatedly telling them "I want to do a cartoon with you guys." The executives all assured Cyndi that they knew about her interest. They promised Lauper that once the right project came along she would be the first person that the Mouse would call.

Cyndi pestered the Mouse for years until, in late 1993, that phone call she'd been waiting for finally came. Disney was just beginning development of a musical cartoon version of Victor Hugo's The Hunchback of Notre Dame. The folks over at Feature Animation were wondering whether Lauper would be interested in being a part of the project.

Would she? Lauper practically flew over to Burbank, so eager was she to find out what the Mouse had in store for her. On the drive over Cyndi wondered: "They couldn't be thinking of me for the voice of Esmerelda ... could they?"

Ah ... Actually, no. Disney wanted Lauper to audition to be the voice of one of Quasimodo's made-of-stone friends: Quinn, a gargoyle.

Cyndi was somewhat taken aback by this request. I mean, she knew that her voice and her looks were ... somewhat unconventional. But to be considered the perfect person to portray an ugly stone statue didn't seem like much of a compliment to Lauper.

But Cyndi - who still dreamed of achieved screen immortality as a character in a Disney animated film - shrugged off the perceived insult and threw herself into the audition process. She did a reading with Disney's casting department then met with the film's directors, Kirk Wise and Gary Trousdale. They liked the energy and humor Lauper brought to the part. A week later, Cyndi was hired. 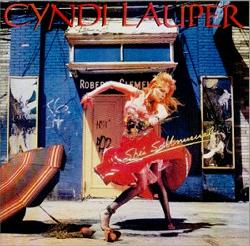 Now keep in mind that Ms. Lauper was brought on board fairly early during Hunchback production. Tom Hulce, Demi Moore and Kevin Kline hadn't even been hired at this point. At the time, Wise and Trousdale still weren't quite sure how they were doing with the film. Given how serious the original Victor Hugo novel was they knew that a new film version would need considerable comic relief - particularly if they wanted to make the project palatable to modern audiences. But what sort of jokes should they do to lighten this somber story? And where?

Wise and Trousdale felt that one of the keys to making Hunchback work as animation was to give Quasimodo some silly sidekicks. These characters would have to serve two purposes: 1) Give the Hunchback someone to talk with and confide in while he was locked away in his bell tower, and - more importantly - 2) Make Quasimodo seem more loveable. A person with loyal, funny sidekicks has got to be lovable, right?

Hoping to find the right ingredients, the Hunchback development team spent a few months tossing around sidekick ideas for the hunchback. One concept was to have Quasi befriended all of the birds that lived up in the rafters of the cathedral with him. Just like in Cinderella, his little feathered friends would have helped the hunchback through his day - doing little chores for him, cheering him up, cheering him on. You get the idea.

But, because this same bird friend idea had already been so thoroughly played out in Disney's 1950 animated feature Cinderella, Wise and Trousdale opted not to go forward with this story idea (Though you can still see a hint of this character development in Quasi's interaction with the fledgling pigeon at the beginning of the film).