by Jim Hill (archives)
April 17, 2001
In part one of this two-part series, Jim Hill looks at why the Africa Pavilion never got built at Epcot. 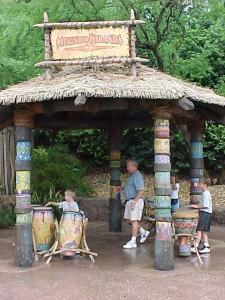 Part of The Outpost at Epcot

What ever happened to .... Epcot's Africa Pavilion
Part One
Jim Hill reveals all the behind-the-scenes shenanigans that lead to this proposed World Showcase addition never making it off of WDI's drawing board.

Jeez, you write one little story about a show that was supposed to be built at Epcot ... and the floodgates open.

This past week, I have literally received dozens of e-mails from LaughingPlace.com readers seeking information about other Epcot attractions that never made it off the drawing board. I got letters from folks asking about WED's original plans for Future World's Space and Living Seas pavilions. I also got notes from people who were requesting stories about the World Showcase pavilions that - for one reason or another - never got built either: Israel, Spain, Switzerland and Russia.

All this - plus questions about Epcot's proposed mountain range (I.E. The mini-Matterhorn that was to have been built behind the Swiss pavilion as well as the miniature Mt. Fuji that would have been built behind Japan. Each of these mountains was to have housed a thrill ride: The Matterhorn would - of course - have been home to an East Coast version of Disneyland's popular bobsled ride while Mt. Fuji would have been built over a bullet train-themed roller coaster) as well as the mysterious Entertainment pavilion that was to have been built between "Imagination" and "The Land" at Future World (This mid-1980s concept outgrew the confines of its proposed Epcot construction site, eventually leading to the creation of WDW's third theme park - Disney/MGM Studios, which opened in May 1989).

But what was the No. 1 most requested story? By an almost 2 to 1 margin, LaughingPlace.com readers most wanted to hear about Epcot's equatorial Africa pavilion.

Why was that? To be honest, I believe that a lot of the continued interest in this proposed World Showcase pavilion has to do with that Epcot Center Grand Opening special that the Disney Channel keeps airing on Vault Disney. You know, the one where Danny Kaye and Roots author Alex Haley stand with a scale model of the African pavilion right in front of the parcel of land where this World Showcase addition was to have been built?

Those of you who have seen this October 1982 CBS program may recall that Kaye ooohs and aaahs over the model. Then - after firmly shaking Haley's hand - Danny says something to the effect of "Well, I'll see you back here in one year's time, Alex, so that we can tour the real thing together."

So why exactly didn't Epcot's equatorial African pavilion ever get built? There's a lot of reasons, actually. Most of them - surprise, surprise - have to do with money.

You see, The Walt Disney Company radically over-spent on Epcot's construction. It's been reported that the Mouse may have blown as much as $800 million to complete Phase One of WDW's second theme park (That's the equivalent of almost $2 billion today). In order for Phase Two - which would have included construction of World Showcase's Africa pavilion - to go forward, Epcot needed to be this huge hit right out of the box.

Unfortunately, that didn't happen. Though tourists did turned out in force following Epcot's opening in October 1982, a nationwide economic downturn in the spring of 1983 caused those crowds to evaporate later that same year. This left the Disney Company saddled with a ton of debt and no immediate way to pay it off.

Which made the Mouse House a very tempting target for greenmailers like Saul Steinberg and Irwin Jacobs. These two swooped in, bought up huge blocks of Disney's devaluated stock, then threatened to break up the corporation and sell off the pieces (the theme parks, the film library, etc.) to the highest bidder. To get these guys off of Mickey's back, Disney had to pay out millions the company didn't have ($325 million to Steinberg, $181 million to Jacobs) to buy back Saul & Irv's blocks of stock.

The end result of this embarrassing episode was that Wall Street - as well as the Walt Disney Company's board of directors - lost confidence in the corporation's management team, which was then being lead by Walt's son-in-law, Ron Miller. By September 1984, Miller was out on the street and Michael Eisner had been installed as the new big cheese at the Mouse House.