by Jim Hill (archives)
April 19, 2001
Originally published in early 2001, this article looks at the history of one of Disney's most controversial attractions - Alien Encounter.

LaughingPlace.com continues its publishing of "Jim Hill: From the Archives" with this article, originally published in January and February 2000. 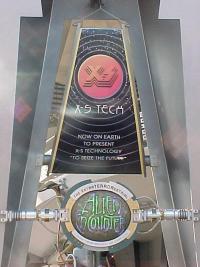 Part One: Now for Something Completely Different...

It was the attraction that was supposed to be the next big thing for the Disney theme parks. The show that would change forever how guests would think about the Mouse by mixing in-theater effects with 3D sound to create high-tech terror.

At least that was what was supposed to happen. But -- instead of becoming a franchise attraction like Space Mountain, with different versions of the ride being built in Anaheim, Orlando, Tokyo and Paris -- only one version of this Tomorrowland show ever made it off the drawing board.

"Alien Encounter." Six years after this hi-tech horror show first opened -- then quickly closed for a mysterious six month revamp -- this Walt Disney World attraction still remains highly controversial in theme park circles. Many WDW fans consider this intense show to be the best thing WDI's ever done. Other Disneyana enthusiasts -- particularly those with small children -- think that this horror show is horrible. They argue that something this scary just doesn't belong in the Magic Kingdom.

Well, if you thought that "Alien Encounter" -- the attraction -- was scary ... wait 'til you hear the terrifying behind-the-scenes tale of how this troubled Tomorrowland show was created.

No. Wait. My mistake. That's Aladdin.

The "Alien Encounter" story actually begins back in September of 1984, when former Paramount studio head Michael Eisner first took control of Walt Disney Productions. Upon entering the Mouse House, one of Eisner's first goals was to boost sagging attendance levels at the company's theme parks. While it was obvious that Disney had a lock on the family audience, Michael believed that the Mouse's parks lacked teen appeal. He based this opinion on his teenage son, Breck, who, when asked by his dad to join him a familiarization tour of Disneyland, he reportedly said "That place is lame, Dad."

Fearing that his son spoke for teens everywhere, Eisner quickly commissioned a marketing survey. Teenagers exiting Disneyland and the Magic Kingdom at Walt Disney World were asked what they thought the Mouse's theme parks were missing. These teens reportedly said that they wanted more thrill-based attractions in the Disney parks, similar to what they could find at the "Six Flags" parks and Universal Studios. Something radical to cut through all the sweetness.

With the results of this survey in hand, Eisner ordered WDI to immediately begin development of several radical new shows that could be added to the Disney theme parks. Buoyed by the acclaim "Star Tours" had received when that simulator ride first opened at Disneyland in January 1987, the Imagineers toyed with the idea of bringing a few more of 20th Century Fox's sci-fi creatures on board at the company's theme parks. But these wouldn't be George Lucas's cute and cuddly "Star Wars" creations. The Imagineers wanted the black and slimy, acid drooling monsters from the hugely popular "Alien" movie series.

Strange but true, folks. Using the story and settings from the first Alien film as a starting point, the Imagineers cooked up a concept for a hi-tech interactive attraction they called "Nostromo." On this proposed attraction, visitors would have rolled through the darkened corridors of the Nostromo -- the spaceship Ripley (Sigourney Weaver) piloted in the first Alien film, riding inside of heavily armored vehicles. Armed with laser cannons, these folks were supposedly on a rescue mission. Their goal was to find the missing members of Nostromo's crew as well as rid the spaceship of all alien intruders.

"Nostromo" certainly was a radical new idea for a Disney theme park attraction. Perhaps too radical. In the end, WDI opted not to go forward with the Alien ride project. Why for? Well, while they recognized that "Nostromo" would have been a thrilling addition to any theme park, certain senior members of the Imagineering staff voiced concerns that any ride that featured the Alien monsters might be too dark and intense for Disney's family-based audience. These same Imagineers were also troubled by the image of children blasting space monsters with laser cannons. "Walt would never have approved of a ride like this," they grumbled. So WDI's first stab at an Alien attraction ended up being blown out an airlock. This show concept never made it off the drawing board.

Well, even though "Nostromo" was a no go, some good did eventually come out of the aborted attraction. 13 years after work on the interactive "Alien" ride- thru show had been halted, Tomorrowland finally got its laser- cannon, alien- blasting attraction ... but in a much more family friendly form. WDW's "Buzz Lightyear Space Ranger Spin" uses many of the concepts that the Imagineers created for their first "Alien" show. This Magic Kingdom attraction has proven to be so popular with the public that Disney is supposedly planning on building "Space Ranger Spin" rides at each of the company's theme park complexes worldwide.

Plus all the development work WDI did on the proposed "Nostromo" attraction did make Disney executives aware of the inherent in-park value of the Alien monsters. So the Mouse decided to license 20th Century Fox's characters for use in its theme parks. Ripley and the Alien monsters were featured prominently in the "Great Movie Ride" when that attraction opened at the Disney / MGM Studio Theme Park in May 1989. But for the first few years of the Fox licensing deal that was the extent of Disney's use of the Alien characters in their theme parks.

A year or so later, some youngish Imagineers were wondering what to do with "Mission to Mars." Eisner had tasked them to come up with a thrilling new replacement for this lame old Tomorrowland show. He wanted something just as exciting as "Star Tours," but in a sit-down theater setting.

Just down the hall, another group of new Imagineering employees were looking for ways to use a 3D sound system Disney had just developed. A small post-show attraction at Disney / MGM's "Monster Sound Show" was the first use, where guests were exposed to auditory illusions like too-close haircuts and arrows whizzing by their ears -- had hinted at the system's possibilities. But these Imagineers dreamed of doing something bigger with 3D sound. Maybe building a whole show around the cutting edge system, even.

Inevitably, the "Mission to Mars" team met up with the 3D sound system guys. Then someone remembered that Disney had licensed the monsters from Alien for theme park use. Mashing all three of these ideas together, this young enthusiastic group of Imagineers began mapping out plans for an attraction that they hoped would change the way people thought about Disney theme parks forever ...