by Jim Hill with Michelle Smith (archives)
April 24, 2001
Michelle Smith helps out Jim Hill this column about the possible return of the Main Street Electrical Parade to the Disneyland Resort. 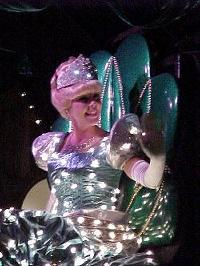 So I get this email from a reader today:

Just read a memo from the parade dept. saying that Elect. Parade WILL be coming back on July 4th.  not to D/L but to DCA!!!  No info on any upgrades, music changes, or new floats.

What, again?  Uh-huh.  Shuuuure.  Then I call around to People Who Would Know, and lo and behold, a couple of them actually do know, and they're telling me this Guy is legit, and the news is solid.  For now, anyway.  The Winnie-the-Pooh attraction, on the other hand, has suddenly found itself on shaky ground.   But more on that later this week.  Maybe.

The next person I called is my darling ex-husband and fellow LaughingPlace.com columnist Jim Hill.  We discussed the thematic problems the parade would have fitting into Disney's California Adventure.  Taking that information, he came up with an interesting scenario:

In this corner, we have Disney's California Adventure theme park. A multi-million project that isn't doing nearly as well as the Mouse had hoped it would. Particularly after dark.

And -- in this corner -- we have Disneyland's famed Main Street Electrical Parade. Having just completed a celebrated 22 month run at WDW's Magic Kingdom, all 575,000 lights -- and the floats they're affixed to -- are currently safely stashed behind-the-scenes at "The Happiest Place on Earth." Mind you, the Mouse would dearly love to start running the Electrical Parade through that Anaheim park again ... except for one itty bitty problem.

You see, Disney's marketing department advertised the summer of 1996 as the "Farewell Season" for Disneyland's Main Street Electrical Parade. TV ads and billboards all over Southern California urged folks to make the trek out to Anaheim to see the parade one final time "before it glows away" forever.

As most Disneyana fans already know, this promotion turned out to be wildly successful. Better than the Mouse could  have ever hoped for. Huge crowds came out to the park all summer long as people fought to get one final glimpse of this Disneyland favorite before Mickey pulled the plug. And -- while they were there -- these folks bought tons of Main Street Electrical Parade memorabilia. Hats, t-shirts, buttons, lithos. All of this stuff stamped with that "Farewell Season" logo.

The public demand to see this show ended up being so great that Disneyland actually had to extend the Main Street Electrical Parade performance schedule until well into the fall -- with the final performance being bumped back from October 15th to November 25th. The remaining "Farewell Season" merchandise flew off the shelves that night, since everyone in the park wanted some sort of token to remember the show by.

So you can see the corner that Mickey has painted himself into. The Mouse sold tens of millions of dollars worth of merchandise, filled up thousands of hotel rooms -- all because the company claimed that the Summer of 1996 would be the Main Street Electrical Parade's "Farewell Season" at Disneyland. Never mind about the 500,000 authentic parade light bulbs that Disney sold off at $10 a pop to benefit 18 different Southern Californian children's charities. So wouldn't these same people understandably be furious if -- less than 5 years after its heavily advertised "Farewell Season" -- the Main Street Electrical Parade were to suddenly return to the Anaheim park?

The sheer audacity of this maneuver by the Mouse is mind-blowing yet brilliant. Think about it, folks. Anyone who dares to complain -- "Hey, didn't you guys say that 1996 was going to be the parade's farewell season? " -- will get this Clinton-esque reply: "Well, to be precise, we said that 1996 would be the Main Street Electrical Parade's farewell season at Disneyland. We said nothing about this beloved parade possibly making future appearances at a different Disney theme park that our corporation might be building right next door in Anaheim at some later date."

With that, all complaints would be mute. Mickey's butt would be artfully covered. And the Walt Disney Company would then be free to present nightly performances of the Main Street Electrical Parade at DCA for many years to come.

The best part is that the ads for MSEP's return to the Disneyland Resort practically write themselves. "Come to Anaheim where -- for one ticket price -- you can spend all day exploring Disney's newest theme park and -- after dark -- get reacquainted with an old friend." Plus having the parade in the park for what will initially be advertised as a "Special Limited Engagement" is almost certain to drive up attendance levels at California Adventure for this coming summer, which will prevent all those nay-sayers on Wall Street from writing off DCA as a complete flop.