by Jim Hill (archives)
May 8, 2001
Jim Hill explains why Disneyana fans should make room in their audio collection for yet another Disneyland recording ...

Just for the Record
Jim Hill explains why Disneyana fans should make room in their audio collection for yet another Disneyland recording ...

Back in March, I'm flying home back to New Hampshire after yet another trip to Anaheim. Like the good little Disney dweeb that I am, I had made a point of stopping by Disneyland's Main Street Music Shop to pick up the latest park CD. (I'm sure you know the one I'm talking about. The "45 Years of Magic" Official Album. Yeah, that's right. The one with "Believe ... There's Magic in the Stars," the "45 Years of Magic Parade" music as well as the "Cowboy Crunchies" song.)

Anyway ... Seeing as I've got six hours 'til my flight touches down in Manchester, I crack open United's in-flight magazine, Hemispheres to look for something to read. And there -- 'w-a-a-a-y in the back -- I notice that Audio Channel 6 is playing sample tracks from two new Disneyland Resort recordings: the official Disney's California Adventure soundtrack as well as the new Disneyland recording. 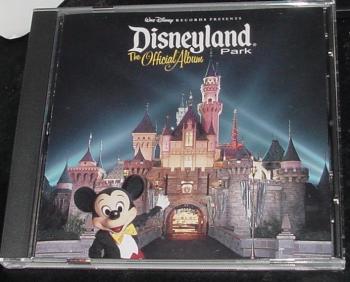 Only -- as I look at the cover art for the Disneyland CD that's being used to illustrate this column in the magazine -- I notice that the Official Album features a Mickey rubberhead standing in front of Sleeping Beauty's Castle at night. Which is considerably different than the artwork that's used on the front of my "45 Years of Magic" Disneyland CD.

Which means it's a different recording than the one I just bought.

Grrrrrrr!!! There's nothing quite so frustrating as having just paid out some of your hard earned cash for something that's supposed to be the latest-and-greatest, only to find out that the item's gone out of date just days after you bought it.

And -- personally -- I thought it was pretty damned aggravating of the Mouse's marketing department to roll out yet another new Disneyland soundtrack less than 10 months after the "45 Years of Magic" soundtrack hit the shelves. Particularly since this was a year when not a single significant new parade, show or attraction was debuting at "The Happiest Place on Earth." So what could Mickey possibly be adding to this recording to make it worth buying?

Hardcore Disneyana fans probably already know Thornton from the excellent restoration work he did in the mid-1990s on the soundtracks for classic Disney motion pictures like Dumbo, Lady and the Tramp and The Jungle Book. Randy -- in an effort to maintain the Walt Disney Company's rich musical heritage -- digitally remastered these films (along with Alice in Wonderland, Peter Pan, Bambi, Cinderella, Sleeping Beauty and Mary Poppins) in both cassette and CD formats.

Thornton's attention to detail (EX: Randy insisted that each of the new recordings of the classic Disney motion picture soundtracks that he personally produced contain all the songs, not the easy-to-excerpt highlights. Plus complete lyric sheets) is what really makes this new Disneyland soundtrack shine. He isn't interested in recycling the same old songs from the same old shows in the same old tired ways. So Randy custom-built all the tracks used in this recording from the ground up.

Case in point: Thornton's handling of Disneyland's "Splash Mountain." The last "Official Album" for the park threw away Critter Country's signature attraction with a 1:31 minute long version of the attraction's "Ev'rybody's Has a Laughing Place" song. Not Randy. His version of the Disneyland attraction features an 8:08 minute long concise recap of the entire ride experience, complete with singing frogs.

Or how about the track that Thornton created for this Disneyland Park Official Album for Tomorrowland's "Star Tours"? Randy doesn't settle for just serving up the music from the ride's queue again, but -- rather -- does a masterful job of recapturing a guest's entire journey across the cosmos. Plus he tacks on Paul Reubens' feeble excuse for nearly getting us all killed aboard that Star Speeder: "Hey sorry, folks. I'm sure to be better next time. It was my first flight, and I'm still getting used to my programming!"

That -- I think -- is my favorite part of Randy Thornton's new Disneyland Park soundtrack. He understands that the appeal of "The Happiest Place on Earth" doesn't just lie in the best known songs from Disneyland's big attractions, but rather the park's atmospherics. That's why the little things included here -- like the "All Aboard!" message from the Main Street Station or the protracted lead-in for this recording's version of "The Great Outdoors" from the Country Bear Vacation Show (where Rufus wanders from one stereo speaker to the other) -- make this recording a must-have for all serious Disneyana audio fans.

Best of all, Thornton is nothing if not generous. The "45 Years of Magic" Official Disneyland Album features just 41 minutes of music. Randy's new recording? A whopping one hour of memorable music and sound.

As I understand it, this recording hit the park last week and is proving to be a big hit with Disneyana fans. If you'd like a copy of your very own, give DelivEars a (800-362-4533) call today.

Now -- if you'll excuse me -- I'm going to go throw the copy of "Disney's California Adventure" CD that I just bought (which Randy also produced, by the way) in the stereo to see if that's any good.

I promise. A full report later.