by Jim Hill (archives)
July 17, 2001
Jim Hill reveals the celebrity tragedy that lead to Disney's decision to deliberately neuter this once promising dark ride ... as well as the right-now-in-the-works plans that should turn Superstar Limo into a real crowd pleaser. Part 1 of 4. 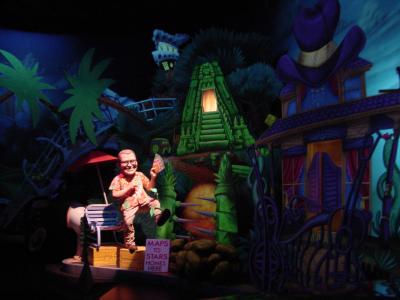 Is Superstar Limo due for a toon up?
Many Disneyland Resort guests consider this Hollywood Pictures Backlot ride to be DCA's worst attraction. But few know the real reason that Superstar Limo ended up being such a limp piece of ... entertainment.

Part One: What you were originally supposed to see ...

Is Disney's California Adventure the "Happiest Place on Earth"?

You wouldn't think so if you did what I did last Sunday, which was stand outside the exit of DCA's "Superstar Limo" ride and listened to the conversations of Disneyland Resort guests as they strode briskly away from this Hollywood Pictures Backlot ride. The following are direct quotes from some very unhappy campers:

"That was -- without a doubt -- the lamest thing I've ever ridden on."

And these are the clean comments, folks. If LaughingPlace.com weren't such an aggressively family friendly site, I'd be able to provide you with a lot more very colorful descriptions of this much beleaguered DCA attraction.

So what happened here? How did Superstar Limo ending up being such an Edsel? Didn't the wizards at WDI realize that this slow moving, limply satirical attraction was going to have limited appeal to DCA visitors? And -- if they *DID* know that this Hollywood Pictures Backlot ride was going to be a dud -- why did the Imagineers still go ahead and build the thing?

The answers to this theme park tale may surprise a lot of you folks. Particularly when you hear about how Disney's planning to totally revamp the attraction this fall. DCA regulars should expect to see a whole new version of Superstar Limo hit the road by Thanksgiving of this year. And -- once the change-out is complete -- this is one California Adventure attraction that toon fans will be sure to go goofy over.

But first ... what exactly went wrong with Superstar Limo? Oddly enough, it wasn't just budget cuts that ruined this ride. But rather it was the death of a princess that actually did the original version of this attraction in.

And -- speaking of original versions -- to really understand what exactly went wrong here, you need to know what Superstar Limo would have been like had the attraction been built according to the original specifications. But -- to get the full effect here -- you really need to chase down some of the original concept art that the Walt Disney Company put out for California Adventure back in 1996, right after construction of the theme park was originally announced.

You'll be able to recognize artwork from this period fairly quickly. This was when DCA's Hollywood district (as this side of the new Disneyland Resort theme park was called back in those days) featured an enormous Sorcerer Mickey hat rising out of the center of this area. This oversized hat would have served as the icon / weenie for this side of the park. Guests would have walked under this super-sized chapeau as they entered "The Magic of Disney Animation" pavilion in the studio section of the park.

Now -- if you've been able to chase down any conceptual artwork from this period in the park's history -- allow your eyes to drift back toward the north eastern corner of DCA's Hollywood area. The section where "Hollywood & Dine" now resides. Notice anything unusual?

Yes, that is a miniature version of the Theme Building at Los Angeles International Airport. That weirdly futuristic building you've undoubtedly seen in dozens of movies & TV shows. It's the image that many film-makers use as visual shorthand, to quickly let viewers know that the action has suddenly shifted to LA.

According to DCA plans circa late 1996 / early 1997, guests riding the Monorail would have had a particularly nice view of this miniature version of the Theme Building. (According to some WDI insiders I've spoken with, there was even talk of putting a miniature version of "Encounters" -- that trendy retro, oh-so-hip Disney designed sci-fi themed restaurant/bar that Imagineer Eddie Sotto helped install in the real LA Airport's Theme Building back in the 1990s -- inside the downsized DCA version of this Southern California icon. But -- as this project's budgets began to get slashed in late 1997 -- the postage stamp sized version of this chic LA eatery was one of the first things to be placed on DCA's chopping block. Or so I've heard. Anyway ... ) These folks would have also been able to look down at all the Disney's California Adventure guests who were queuing up to enter the attraction.