by Lee MacDonald
February 26, 2002
Lee MacDonald goes inside the Walt Disney Studios Park next to Disneyland Paris for this series of reports. 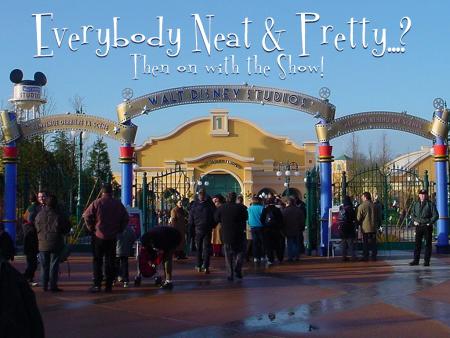 After nearly 13 years of development and construction, the Walt Disney Studios Park (“WDSP”) finally opened its gates to its first guests on Saturday February 23 in the form of Shareholders, cast members and their families and a convention from NRJ, the French media group. The park had previewed for the 8 days prior to Saturday exclusively for cast members in order to hone the scheduling for a park that relies on shows more than any Disney theme park before.

Over the next week or so, I propose to cover the park in its four key areas, beginning with the Front Lot and progressing through the Animation Courtyard, Production Courtyard and climaxing with the Backlot. I will not be publishing many interior shots from the attractions as I do not want to spoil too much. Anyhow, on with the show!! 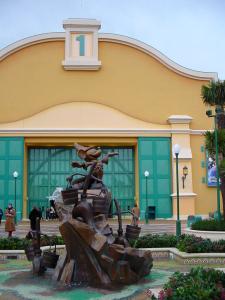 Sorcerer Mickey weaves his magic over those famous broomsticks!
Click here for a much larger version of this picture
(550 X 733, 65,018 bytes)

The Entrance
The gates to the park have been visible for months now, with their towering arches and Spanish Mission-style look in the delicate and warm peach colours that are reminiscent of this type of architecture. At the heart of the arches are two huge iron gates featuring the Mouse himself behind a ‘20s movie camera. However, the security gates closest to the Disney Village were only topped off in the past few weeks with a filmstrip topper welcoming guests to the Disneyland Resort Paris’ (“DLRP”) second gate. As one approaches the main turnstiles, a series of stars are paved into the walkway with searchlights emanating from the gates. It is certainly one of the most spectacular entrances to a Disney theme park! 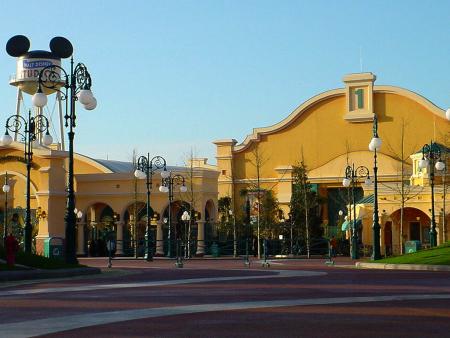 Once through the turnstiles, guests enter a courtyard paved similarly to that of the Moorish design with a stunning Sorcerer’s Apprentice statue at its heart. Here, a bronze Mickey conjures up the stars surrounded by a host of walking broomsticks. One of the broomsticks has even escaped the fountain and is marching across the hub! The statue was sculpted by the famous Italian brothers who were also responsible for the Disney Legends statue that graces the Fantasia Gardens in front of the Disneyland Hotel. The fountain has an electronic ride control system with a randomiser program that causes waves around the base of the sculpture and occasionally, shoots a jet of water out into the courtyard and possibly towards unsuspecting guests! The fountain is flanked by four symmetrical flowering beds featuring towering palm trees to help set the Hollywood scene. 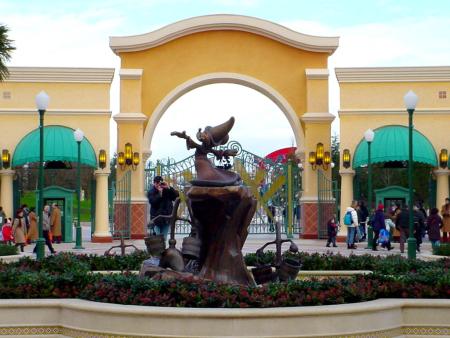 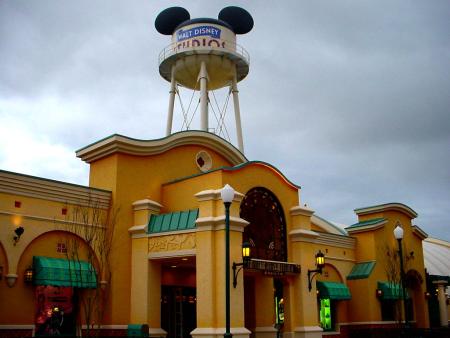 The Walt Disney Studio Store in the shadow of the Earffel Tower
Click here for a much larger version of this picture
(1024 X 768, 125,408 bytes)