by Lee MacDonald
February 28, 2002
Lee MacDonald continues his tour of the new Paris park with a look at the Animation Courtyard. 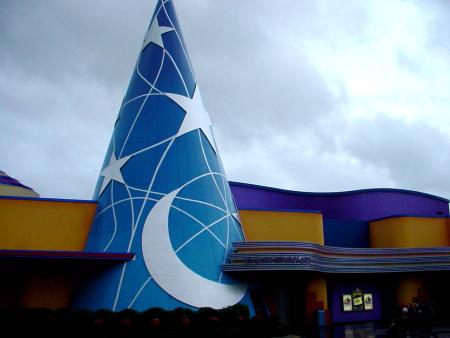 If you missed it, Part One is still available.

The Animation Courtyard occupies the smallest area of the three districts of the WDSP. It immediately flanks the eastern side of Studio 1 and currently consists of three attractions, the Art of Disney Animation, Animagique and the Flying Carpets Over Agrabah. 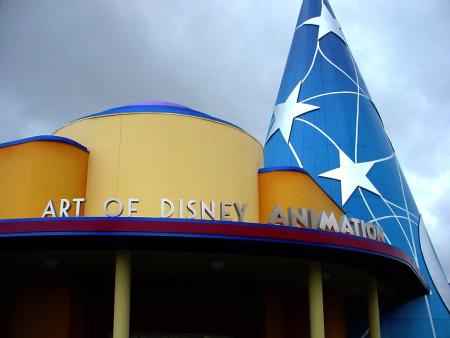 The Art of Disney Animation is an imposing building within the Animation Courtyard.
Click here for a much larger version of this picture
(1024 X 768, 99,391 bytes)

The Art of Disney Animation
Guests to Disney’s California Adventure park may find this attraction to be eerily similar in design. However, the external structure is different with a giant Sorcerer hat as the anchor to one corner. The bronze character sculptures that famously encircle the Partners statues at Disneyland & the Magic Kingdom and can be found along the elevated walkway from the Bon Voyage store to the Tokyo Disneyland monorail station at Maihama, are planted around the outside of the Sorcerer hat. However, several new additions can be found at WDSP including stunning 3D models of Hercules, Mulan and Tarzan.

The walls of the queue area to the attraction are covered in sketches of Disney characters. Guests enter the building into a new pre-show area that features several interactive displays of how early animation pioneers created their masterpieces from the Kinetoscope to the Zoetrope, demonstrating the European roots of animation. The most impressive display is that of a multi-plane camera that was still in use at the Studios in Burbank until the late eighties. A nice touch is that each layer has a different animation cel to show how the process works. The pre-show walls are covered with posters from the early Mickey Mouse shorts and Silly Symphonies. The pre-show itself is hosted by Roy E. Disney as he talks about the early days of animation and Roy introduces Walt explaining the European roots of animation. At present both Roy and Walt are dubbed in French. At the conclusion, the host cast members invite guests to join them in the Walt Disney Classics Theatre where guests are shown some of the highlights of Walt Disney Feature Animation. The movie is similar to that currently running at Disney-MGM Studios.

As guests leave the theater, they move into another arena which again, is identical to that poached from DCA. The stage is set with bookshelves full of Disney animation memorabilia and an animator’s back-lit drawing board. The overhead screens show Mushu from Disney’s Mulan interacting with the host prior to Chris Sanders & Dean DeBlois introducing selected scenes from the upcoming Disney’s Lilo & Stitch. 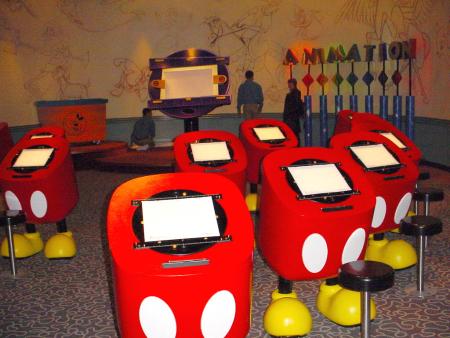 These Mickey short seats are used by guests wishing to try their hand at drawing a famous Disney character.
Click here for a much larger version of this picture
(1024 X 768, 170,139 bytes)

The second theater exits into a room full of interactive displays allowing guests the opportunity to be taught how to draw a Disney character (very similar to the experience offered by DisneyQuest in Walt Disney World), add your own sound effects and add your own voice dialogue to a classic Disney scene. Unfortunately, the stunning entrance hall to DCA’s Animation building could not be replicated at WDSP (although the original designs did include the giant erratically placed wrap-around screens), a series of light boxes on the main wall show stills from Disney features.