There are the obvious treasures—certain soundtracks, the traditional animated features, Pixar titles, and the Walt Disney Treasure collections. There are just certain things no Disney collector is without.

When I was in the heyday of my Disney collecting—which eventually trickled to an end as a result of two big events, the cessation of the traditionally animated movies that excited me and the complete lack of space with which to display and store Disney memorabilia. In those days, I was always particularly interested in the rarer pieces and rare live-action tie-ins because live-action tie-ins tend to be fleeting. You’ll always find Belle or Dumbo collectables, but Mighty Joe Young or The Love Bug stuff is only momentary.

There are some items, however, which are more rare but are simply must-haves for serious Disney collectors. Some of them are readily available, some will require a measure of digging, and some only require a treasure map for people to realize they are out there. Here are some of my favorites: 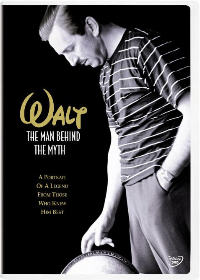 1. Walt: The Man Behind the Myth—This is the documentary on Walt Disney that was spear-headed by the Disney family in response to some of the more ridiculous accounts of Walt Disney’s life.

When I was younger, I always prided myself on loving Disney for the films and for not being caught up on the man; however, as I’ve grown older, I’ve come to understand that his film studio and theme parks were what they were because of the man behind them. In the hands of another studio head, Cinderella; 20,000 Leagues Under the Sea; Lady and the Tramp; Swiss Family Robinson; and That Darn Cat! would not be what they are. There’s a reason why many other successful movies from 1965 are nowhere to be seen or are relegated to Netflix while That Darn Cat!, a light comedy, is still selling copies today.

Walt: The Man Behind the Myth

attempts to be an honest view into Walt Disney the man—including glimpses into his less proud moments of the Disney Studio strike and his testifying against perceived Communists during the McCarthy era. Where the film shines, however, is in letting us know Walt Disney as a person—significant events that shaped him, motivations behind life choices, his creative drive, his family.

Filmed in beautiful widescreen with contemporary footage of past locations from Disney’s life, combined with interviews from many key people in the Disney empire, and rare home movie footage, Walt: The Man Behind the Myth is more than a documentary. It is a source of inspiration and an entryway into the life of a great man. 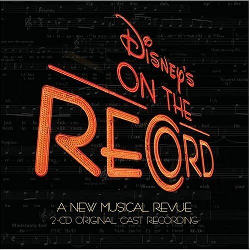 2. On the Record Original Cast Recording—On the Record was a touring revue Disney produced in an attempt to utilize its massive music catalog with limited financial investment. The show itself, which I wrote about during its run, was enjoyable but not a particularly spectacular evening in the theatre. The aspiration to limited financial investment was apparent from its lack of a librettist to tie together the weak character moments lamely interwoven in the show, though its strength was in great casting. Its most notable cast member was Broadway star and Tony-nominee Emily Skinner, who departed the show with much dissatisfaction, leaving talented understudy Katilin Hopkins to record the album. The show also gave a start for Ashley Brown, who would later star as Belle on Broadway and then create the role of Mary Poppins in the Broadway production of the show, a role she will be recreating on tour across America (though, sadly, no American recording of the score with Brown was ever produced). Also of note, heard as part of a small chorus is current The Little Mermaid star Tyler Maynard and Broadway’s Legally Blonde’s UPS man Andy Karl.

The appeal of the On the Record recording is forty-five tracks of great Disney songs recorded with new arrangements and, sometimes, new lyrics. The songs are presented both alone (such as in Brown’s stellar “A Change in Me” and “Reflection”) and in effective medleys (such as one which combines “Can You Feel the Love Tonight,” “I Won’t Say (I’m in Love),” “Let’s Get Together,” and “Belle”). Because we’ve heard many of these songs a billion times, this recording is great because it allows us to hear the music and lyrics in a fresh way. Plus, as a lover of Disney music, it’s fun to see what they do with the songs and how they are presented.