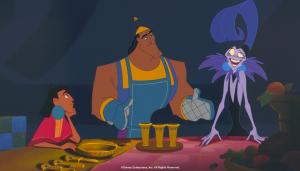 Behind the Scenes
Three featurettes on the making of the film, also included on The Ultimate Groove:

: When possible, Disney animators go to a locale of the film to "soak up the atmosphere" and do research on local architecture, landscaping and artwork. Not only did the crew of The Emperor's New Groove travel to Peru, but they also made a trip to a llama farm, as explained in this brief short.

: It is always fun to see footage of the voice actors at work. They take their animated roles seriously, just like any other part. As John Goodman (who played Pacha, "the glue that holds the film together") states "it's a different sort of acting, all about truth."

: You'll be surprised to find out what props in The Emperor's New Groove were created by use of CGI, how well they seamlessly blend into the rest of the movie.


In this scene, cut because it "emotionally didn't fit the tone of the picture," we view the "Practice Destruction of Pacha's Village." You can see why it was left out as it was a harsh example of Kuzco's selfishness. (Also available, with two other deleted scenes, on The Ultimate Groove.)


Why does every pop song from a movie music video have to feature the singer warbling into a panty-hose protected microphone in a dimly-lit recording studio while promotional clips from the movie are edited in haphazardly? And why would they think we would want to watch them making such a video?

Most Unintentional Laugh: Sting actually says "I like buddy songs (like My Funny Friend and Me) they're not to sentimental." Huh???

Burning Question: What exactly is a "sassy moonwalk"?

(Both videos are also available on The Ultimate Groove.)

"The Emperor's Got Game" Adventure Game


While most DVD games will hardly have you hocking your Play Station, this one benefits from the use of new dialogue recorded by Eartha Kitt and Patrick Warburton. Using your remote, you navigate Kuzco Llama through his treacherous trek from Pacha's house back to the palace by answering trivia questions about the movie.