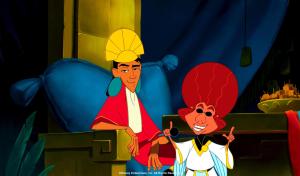 The Top 10 Things We Learn From This Commentary:

Check out next week's edition of Toon Talk for a full overview of the two disc collector's edition, The Emperor's New Groove - The Ultimate Groove.

Kirby is a lifelong Disney fan and film buff. A frequent contributer to the LaughingPlace.com Discussion Boards, he currently resides near one of the Happiest Places on Earth: Orlando, Florida.

The opinions expressed by our Kirby C. Holt, and all of our columnists, do not necessarily represent the feelings of LaughingPlace.com or any of its employees or advertisers. All speculation and rumors about the future plans of the Walt Disney Company are just that - speculation and rumors - and should be treated as such.