Jim Hill: From the Archives
Page 2 of 7

Then the directors toyed with the idea of having Quasi actually be friends with the bells in the tower. This was something that Hugo himself had touched on in the original novel. He had had the hunchback name many of the bells in the belfry - little Sophia, Jean Marie, Anne Marie, Louise Marie and Big Marie - as well as converse with the bells. So it didn't seem like too much of a leap for the film-makers to have the bells talking back to Quasi.

But, again, Wise and Trousdale weren't all that anxious to repeat something that had already been in done in a Disney film. As the directors of Beauty and the Beast, these guys had already made a candelabra, a mantleclock and a teapot talk. So turning a 10 ton bell into Quasi's close intimate friend didn't seem like that much of a challenge to them.

So that left the gargoyles - those strange stone statues that lined the parapets of Notre Dame. Wise and Trousdale liked the idea of giving Quasi some misfit gargoyles - statues so ugly that the stonemason didn't dare put them out on display - to hang out with. The directors and their Hunchback development team knocked around a few ideas and came away with some unique names and personalities for these proposed gargoyle characters. They were:

Chaney: The big fat stupid one. Think of Pumbaa, only carved in stone.

Laughton: The haughty, stiff, proper one. A Felix Ungar frieze.

Quinn: The young, kind-hearted nurturing one. (This was the character Disney had hired Lauper to do the voice for.)

Okay ... I know. You're probably already saying to yourself: "But Jim. Those aren't the names I remember from Disney's animated 'Hunchback movie. Weren't the gargoyles called Victor, Hugo and Laverne?"

Yes they were ... eventually.

But. when Disney's Hunchback project started out, Kirk and Trousdale wanted to call the movie's gargoyle characters Chaney, Laughton and Quinn. Why? Well, if things had worked out the way Kirk and Gary had intended, these character's names would have made a great in-joke as well as paid tribute to three great actors who already had strong ties to this story.

Chaney. Laughton. Quinn. Get it now?

Wise and Trousdale thought that by using these names they'd come up with a really clever way to pay tribute to these actors who had already done such a superb job portraying Victor Hugo's tragic hero. Unfortunately, Disney's legal department thought otherwise.

The Mouse's lawyers were worried that Chaney and Laughton's heirs might be offended by this gesture and decide to sue the studio. They were particularly concerned about Anthony Quinn - who is very much alive and had a reputation for suing folks at the drop of a hat - coming after the company with a army of attorneys.

So Disney's lawyers told the Hunchback development team that there was no way that they'd be allowed to name their gargoyle characters after any actors -- living or dead. But Kirk and Trousdale were really reluctant to give up on this gag / tribute. So, for a short time, the Hunchback gargoyle characters were called Lon, Charles and Anthony. Surely Disney's legal department wouldn't have a problem if the development team named the characters by using only the first names of the actors who'd played Quasimodo?

They could. They did. Disney's legal department said "No" again. Which left the production team with three gargoyles to name.

The Victor & Hugo idea came very quickly. After all, the names paid tribute to the author of The Hunchback of Notre Dame. More to the point, he was a dead guy -- so Hugo wasn't around to try and sue Disney. The legal department LOVED this idea.

But what to call that third gargoyle? Wise and Trousdale pondered over this one for a while. As written, the character was a female as well as being a member of a trio. The name they came up with had to fit the character. More importantly, it had to be funny.

Finally, Kirk was the one who came up with the solution. He recalled the Andrew Sisters, a legendary musical trio from the 1940s - best known for their performance of the Boogie Woogie Bugle Boy of Company B.

And what were the sisters' names? Patty, Maxine and Laverne. Laverne seemed like the funniest name of the three, so that's how Cyndi Lauper's character became known as Laverne.

Cyndi was doing wonderful work in her recording sessions. Good, clear, sharp professional stuff. The problem was that the script - as originally written - wasn't working. The way Lauper was portraying the character, Laverne sounded like a contemporary of Quasimodo. Someone his own age who understood his need to get out of the bell tower and explore that great, big world "Out There." 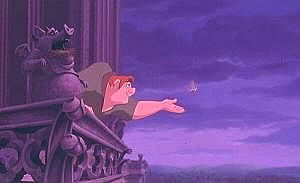