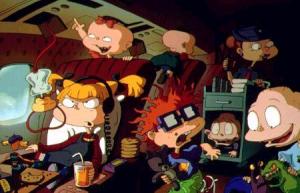 That's Chery, from Rugrats in Paris, on the left
(c) Paramount Pictures and Viacom

To answer this question, the nice folks at Famous Fone Friends put me in touch with Cheryl Chase -- best known as the voice of the adorably obnoxious Angelica Pickles of Nickelodeon's hit animated series, "Rugrats." Cheryl -- in sharp contrast to the five year old terror she regularly provides vocals for -- turned out to be a terribly sweet young woman who just sort of backed into her Famous Fone Friends gig.

"Someone contacted my agent, saying that they'd gotten a request for Angelica to talk with this kid," Chase explained. "I thought it would just be a one time thing. Little did I know that my character would wind up talking with six or seven sick children every couple of months."

Cheryl -- though a soft spoken person while off-stage -- clearly takes pride with her involvement with Famous Fone Friends. Though even she seems surprised at how popular her abrasive character is with children in hospitals around the country.

"I don't soften up Angelica at all when I talk with these kids. I just pretend that she's always been their somewhat bossy friend. And the kids just love it," Chase continued. "They seem to get a real kick out of what a fireball Angelica is in the phone."

Even so, Cheryl sometimes has to psych herself to make these calls. Making one of these Famous Fone Friends calls can be a pretty emotional and physically draining experience for a performer.

"I remember this one little girl. Denise, I think her name was. Five years old with some sort of immune system problem," Chase remembered. "I got on the phone with her, figuring that I'd end up carrying the conversation. But Denise totally took over."

This little chatterbox immediately started telling Angelica/Cheryl about all the things that they had in common. How they both loved dolls and hated broccoli. In fact, Denise was so happy that Angelica had called her that she decided to entertain her favorite cartoon character by singing her a song.

So here's Cheryl Chase -- quietly choking up at her end of the phone -- totally blown away by this sick five year old girl that she's supposed to be entertaining who's now belting out a song for Angelica from her hospital bed.

"Okay. Now you sing a song, Angelica," said Denise. Wiping away her tears, Chase did just that.

The folks who work with Famous Fone Friends have hundreds of stories like this. Sweet little sick kids who are just so thrilled to get a phone call from the real Ariel. The real Mickey Mouse. The real Angelica.

So why did I bring this up today? Famous Fone Friends is a non-profit organization that regularly receives requests for these sorts of phone calls from over 300 hospitals across the United States and Canada. Everyone who works for this amazing outfit is a volunteer. More to the point, the service is entirely funded by donations.

So -- this coming weekend -- you could blow your dough on Easter candy. Which means that you're probably going to have trouble fitting in that swimsuit come Summer. Or you can take the money you would were going to waste on Marshmallow Peeps and give it to an organization that could actually do something positive with that cash.

It's up to you, folks. Thicker thighs and tooth decay ... or you could help make a few sick kids a whole lot happier. The choice is yours.

If you'd like to learn more about what you can do to help the Famous Fone Friends, drop them an e-mail at [email protected]

Okay. Next week -- I promise -- I'll get back to churning out more highly detailed, somewhat cynical stories about the Walt Disney Company. Thanks for indulging me here today, folks. For allowing me to point out that magical things do happen outside of the Magic Kingdom.