*Sigh* Enough about the tomorrow that never came ... Let's get back to the saga of "Alien Encounter," shall we?

The delay of Disneyland's Tomorrowland redo meant that -- by default -- "Alien Encounter" would open in Florida first. Disney's sensory horror attraction would have its world premiere in the Fall of 1994 at WDW's Magic Kingdom. The show would be the last thing to open as that park completed its own year-long rehab of its Tomorrowland section.

For the Imagineers who'd labored for years to create a bold new attraction for Disneyland, it was a real disappointment to learn that their show would now open in Florida first. To WDI's way of thinking, the only upside to "Alien Encounter" debuting at Disney World was that -- thanks to the Magic Kingdom's system of utilidors -- installation of the key elements of the show (I.E. the audio animatronic aliens) would be somewhat easier.

You see, had "AE" rolled out in Anaheim first, that would have involved digging a sizable hole at the center of both of the old "Mission to Mars" theaters. Which -- given the tangle of electrical wires, water pipers and gas lines that run through this corner of Disneyland -- no one in Imagineering was particularly looking forward to this aspect of the Tomorrowland redo.

Another problem was that -- due to the shifting of "Alien Encounter" 's debut from Disneyland to Walt Disney World -- significant redesign work had to be done on the proposed attraction so that it would fit properly into WDW's "Mission to Mars" theaters. This meant postponing the start of construction on the Magic Kingdom's version of "AE" for a year or more

As a direct result of this delay, the team that originally dreamed up "Alien Encounter" moved on to other assignments at WDI. Which -- as it turned out -- was a bad thing. Because Eisner began to have second thoughts about whether this proposed Tomorrowland show might be too scary for the typical theme park guest to handle.

That's why the Disney CEO ordered WDI to assign a new group of writers to the "Alien Encounter" project. Their mission? To lighten the tone of the attraction by adding a few laughs to the show. This the new group of Imagineers did. Which made Eisner happy. The downside was that these new gags significantly weakened "AE" 's storyline. But that really wouldn't become apparent until things were almost too far along with the WDW version of this attraction." 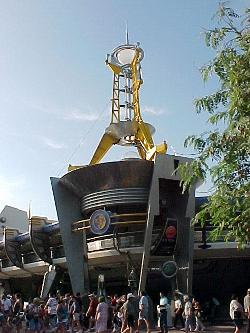 Speaking of which ... Walt Disney World senior staff were thrilled when they learned that the Florida park would get to premiere this ambitious new attraction. That's why WDW's publicity department pulled out all the stops to promote “Alien Encounter.” This office created a clever series of teaser ads that made the soon-to-open show sound like the scariest thing that had ever been staged in a Disney theme park. WDW management was so certain that the attraction would be a hit with the public that they ordered up a ton of "Alien Encounter" souvenir merchandise.

Exterior work on the old "Mission to Mars” show building was completed by August. WDI’s installation team had "Alien Encounter" ‘s hardware loaded in by late October. All that was left for Imagineering to do was a few weeks of on-site "test and adjust" work on the attraction. Then they’d turn “Alien Encounter” over to the operations staff at WDW’s Magic Kingdom.

That was the plan, anyway. WDI spend the first part of November training the opening crew for “Alien Encounter.” They’d then run a few test audiences through the attraction – just to make sure that everything worked the way it was supposed to. With any amount of luck, "Alien Encounter" would be up and running by late November and the California-based Imagineering installation team could be back home in time for Thanksgiving.

Too bad it didn’t quite work on that way.