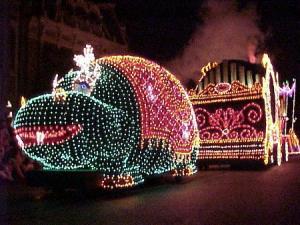 So when can we expect to begin hearing moog music echoing across Paradise Bay? The word is that Disneyland maintenance staff received orders yesterday that they have to have the MESP parade floats ready to roll through DCA by July 4th. That's just 70 days from now, kids.

Is this truly a done deal? Will Pete and his disappearing dragon, King Leonidas and his steam-belching calliope as well as Mickey and his giant bass drum really begin rolling past DCA's Bountiful Valley Farm and Pacific Wharf just 10 short weeks from now? Remember the Fab Dis Babe's all-important "Dick Tracy's Crimestoppers" rule:

"Until after the grand opening for the public, nothing at Disney is ever certain."

So -- until we get the official announcement from Mickey's marketing staff (which should be sometime next month) -- all bets are off.

But -- if you're really a hardcore Disneyland's Main Street Electrical Parade fan and longed for the day when this colorful night-time extravaganza would finally return to Anaheim -- now might be a really good time to clear your calendar, give the Disneyland Resort reservations line a call and see if they have any rooms available for July 4th.

Because something tells me that there'll be more than fireworks to entertain the record number of guests that will be cramming into DCA that night. 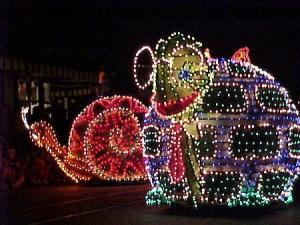 Which begs the question...how the heck do they theme it?   What do they call it?  Disney is safely out of harm's way in California's power crunch due to their friendly relationship with Edison Electric, the company which is also, coincidentally enough, the sponsor of Disney's baseball stadium, Edison Field, home of the Angels.

What better nighttime spectacular to delight nighttime visitors to Disney's California Adventure than "The Edison Electrical Parade"?   Just do us all a favor and do something to bring the music up to this century, will ya?