Jim Hill: From the Archives
Page 5 of 5 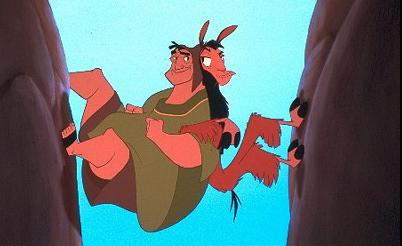 Here -- out of the ashes of "Kingdom of the Sun" -- was the making of a fun family film. Something very different for Disney Feature Animation: their first ever buddy picture.

Admittedly, this new version of "Kingdom" didn't strive to be artistic like "Pocahontas" or deeply moving like "The Hunchback of Notre Dame." All it aimed to be was an animated comedy that made you laugh. A lot.

Randy Fullmer and Mark Dindal thought that they had done a pretty good job of salvaging "Kingdom of the Sun." But -- as their two week deadline drew to a close -- the big question was: Would Michael Eisner really go for a film that aimed so low, for a movie that didn't really have a moral but just wanted to entertain?

Initially, Eisner did have some real reservations about the radically revised film. He worried that "Kingdom" 's new hip storyline had the same weaknesses as Disney's 1997 release, "Hercules" -- the lowest grossing animated feature that Disney Studios had produced in the past five years. Eisner was concerned that if the proposed film's jokes were too hip for the room, audiences would steer clear of the "Kingdom" -- just as they had with "Hercules."

Dindal admitted that "Kingdom" 's humor did share "Hercule's" modern sensibility. But "Kingdom" 's advantage was that it had a much smaller cast.

"Hercules" had dozens of characters -- with new ones seeming to come on screen every five minutes. Given the large size of that film's cast, that made it difficult for audiences in 1997 to familiarize themselves with the main players in "Hercules." That's why they never made an emotional connection with the material -- which is why many folks at Disney Feature Animation believe that "Hercules" ultimately failed to find an audience.

But -- with the revised version of "Kingdom of the Sun" -- audiences would be dealing with a much smaller cast of characters. Kuzco, Pacha, Yzma, Kronk, plus just a handful of supporting players. Dindal and Fullmer promised Eisner that -- in spite of the cutting edge stylings of the film's humor -- audiences would still be able to connect with "Kingdom" 's characters and grow to really care about them.

Eisner still wasn't entirely convinced. But -- on the other hand -- he could ill-afford to shut down the $25 million production. In the wake of the $100 million plus the Walt Disney Company had paid out to make Mike Ovitz go away and with the Katzenberg compensation case still pending, Eisner didn't dare pull the plug on "Kingdom of the Sun." A move like that was sure to cement his reputation as a media mogul who was pretty careless with other people's money.

So Eisner reluctantly allowed "Kingdom of the Sun" to resume production. Though Dindal and Fullmer were thrilled at the Disney CEO's decision, they also reminded Michael that it would take them at least six months to fully storyboard their new script treatment. That meant that production of "Kingdom" couldn't get back up to speed 'til January 1999.

So -- given this new timetable as well as the fact that "Kingdom" was still supposed to arrive in theaters during the summer of 2000 -- couldn't Eisner see his way clear to pushing back the movie's release date to -- say -- the summer of 2001?

Nope. Eisner had already promised that time slot to Kirk Wise and Gary Trousdale for their animated sci-fi epic, "Atlantis: The Lost Empire." And Thanksgiving 2001 was already booked too. That was when Pixar was supposed to deliver its next computer animated blockbuster, "Monsters, Inc."

After that? Well, the summer of 2002 was out too, seeing as Eisner had already told Ron Clements and John Musker that that was when their comic adventure, "Treasure Planet," would hit theaters.

After that ... There was "Brother Bear," "Lilo and Stitch," that 75th anniversary Mickey Mouse project ...

After looking over the studio's upcoming release schedule, the best Eisner could do was to postpone "Kingdom of the Sun" 's release 'til Christmas 2000. To do this, he'd have to move up the release date of Disney's computer animated epic, "Dinosaur" to fill the hole that the delayed "Kingdom" had left in the line-up.

(Mind you, there are those at Feature Animation who still feel that "Dinosaur" was immeasurably harmed because its final months of production were rushed to meet the earlier release date. Story problems that could have been easily fixed in that film were ignored as Disney's Secret Lab hustled to make the film's Memorial Day 2000 release date.

So -- instead of the Summer of 2000 -- Fullmer and Dindal had six extra months to deliver a finished version of the revamped "Kingdom of the Sun."

As it turned out, they would need every minute of that extra six months.

Look for the conclusion of the story on Thursday, May 10th.