Now it's important to understand here that the queue area of the current version of Superstar Limo retains some of the wit and edge that the earlier, much more grandieous version of this Hollywood Pictures Backlot attraction would have had. The snarky posters that make all those snide industry jokes. The Cast Members who ask "How many in your entourage?"

But having a miniature version of the LAX Theme Building serve as the show building Superstar Limo would have done such a better job of setting the stage for this ride, giving guests a real sense of time & place before they boarded this attraction. How do I know? 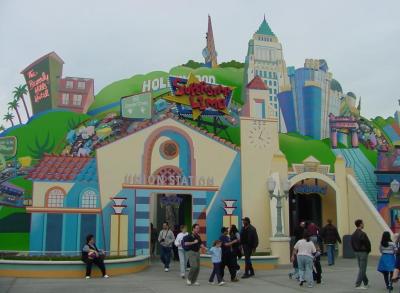 Anyway ... many Imagineers will tell you that Disney's first big mis-step with Superstar Limo was when management decided to cut the budget for this attraction and opted not to go forward with WDI's original plans, which was to house this Hollywood Pictures Backlot attraction inside a miniature version of the LA Airport Theme Building. What they did instead was build a fairly bland show building which features a few painted flats over its entrance that caricature several Hollywood / Los Angeles icons like Union Station as well as those crazy California freeways.

Mind you, it's not like the Imagineers didn't try to add a few witty touches with the exterior of this Hollywood Pictures Backlot attraction. But some of the gags here are so obscure that only a few folks ever get them. For example: How many DCA visitors get the idea that the planter that's out in front of Superstar Limo's entrance is supposed to be a filled in swimming pool? Look for the pool's ladder the next time you stroll by this attraction. 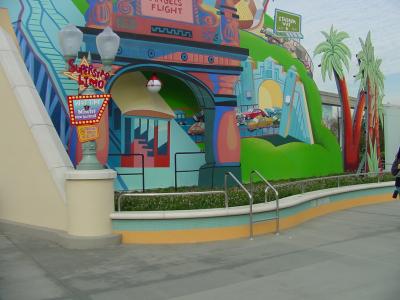 The stylized luggage carousel that guests see once they reach the building's interior queue area helps set the stage that they've supposedly just arrived at an airport. The huge posters on the walls and the constant announcements over the public address system reinforce this image. But if the executives at Disney had just opted to go with the smaller, funnier version of LAX's Theme Building, the story could have started so much sooner for folks who were getting in line for the attraction. They would have had a much clearer sense of where they were and who they were supposed to be before they boarded their purple stretch limo and headed off for a wild ride through a satirical, stylized trip through Tinsel Town.

Yes, you read that right. "A wild ride." Not the poky, slowly paced trip you take now. But rather a high speed, zippy trip. Not Rock 'n' Roller Coaster, mind you. But something more along the lines of Mr. Toad's Wild Ride. Only on steroids.

The original storyline for this DCA attraction was supposed to have been that you -- the Disneyland Resort guest -- were supposed to be this big-time celebrity. From the very moment you got on queue for Superstar Limo, you became Hollywood's latest sensation. Someone who was world famous but also in danger of being late for your very own film premiere.

As you boarded your limousine, Disney CEO Michael Eisner would appear on the ride vehicle's video screen and reminded you that you still hadn't signed the contract for your next picture. That big film that you were supposed to be making for Walt Disney Studios. Michael would then have told you that he would be waiting for you -- with contract in hand -- at the end of the red carpet at Graumann's Chinese Theater. All you had to do is get to the theater safely and sign ... and your fortune would have been made.

Eisner would then tell you that the paparazzi are out in force that night and to be extra careful on your way to Graumann's. "Don't do anything that would ruin your reputation," Michael warns.

At this point, your unseen limo driver says "So you're late for your premiere, eh? Don't worry. I know a few short cuts." And -- with a screech of tires -- you were off on a wild trip through Hollywood.