Although Catastrophe Canyon is identical to its Florida sibling, the actual context is somewhat different. At Disney-MGM Studios, the Imagineers had attempted to clone the Universal attractions by suggesting that you were actually stumbling into the Canyon and subject to the earthquake, flash floods and oil rig fires. I always found this to be rather lame and out of context with the rest of the park. At Paris, the Canyon is a “working” set that guests are visiting. Prior to entering the Canyon, guests can see a collection of movie paraphernalia, like rigging, lights and cameras, all sitting beside a Studio truck. 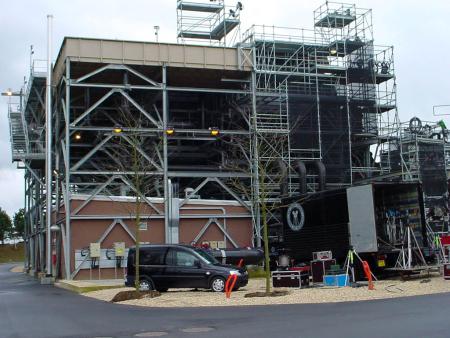 Our tour was rather more fortunate than others who experienced the previews of the attraction. At the WDSP, the trams have to be exactly on the markers in the Canyon, as each tram section sits on a rocking floorbed and the beds will not start their motors until the trams are perfectly aligned. Once the tram hits the mark, each section rocks differently to its neighbors. For much of the day, the drivers were not hitting their marks (reminiscent of the previews of the Kilimanjaro Safaris at Disney’s Animal Kingdom back in April 1998). On leaving the Canyon, the screen hosts explain how the effects were created using nifty overhead cameras to show the water tanks being dumped into the Canyon. 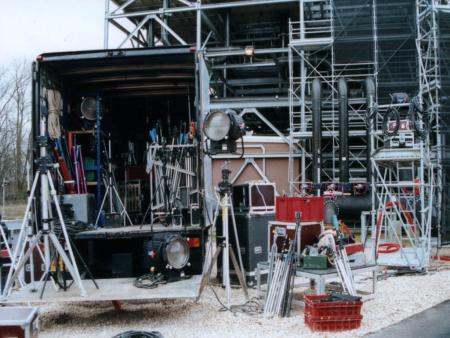 Next on the tour is a small airplane hangar featuring planes that were used in the Pearl Harbor movie. The tram then moves on into the costuming department. Much like in Florida, window bays are dedicated to the costumes worn by the stars of Walt Disney and Touchstone Pictures movies. However, when the tour continues past the actual working costume rooms, guests are told that these folks are working on their next feature. This is not technically accurate, as the building is solely used for cast member costuming, but hey, it is the movies and a few little white lies never hurt anyone!

The trams then shuffle past the loading station and head off into the “London” section of the tour. However, first is a glimpse of some cars and other vehicles that had been used in past Disney productions. The final sequence of the tour shows a decimated street from London. The set is intricately detailed and is a re-creation of a scene from Touchstone’s upcoming Reign of Fire starring Matthew McConaughey and Christian Bale. As the trams past the epicenter, a huge fireball explodes towards the tram, created by one of the dragons that destroys human civilisation in the movie. The tram proceeds behind the set to show how the building are infact just fronts on simple iron frames before heading back to the load station. 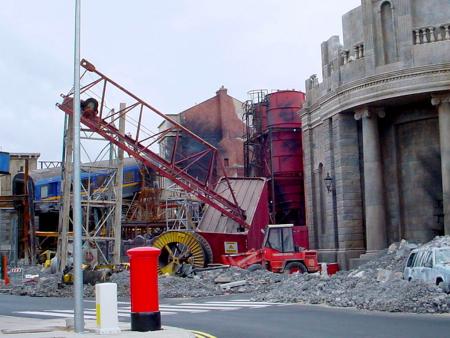 London is decimated by fire-breathing winged dragons.
Click here for a much larger version of this picture
(1024 X 768, 151,105 bytes) 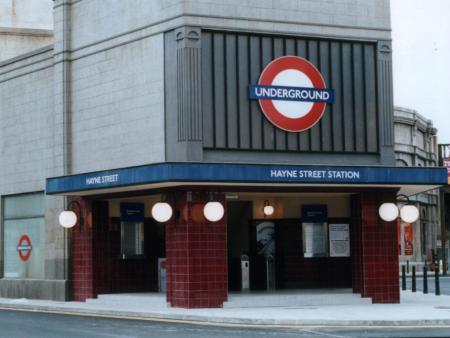 On opening in May 1989, the Studio Tram Tour at the Disney MGMStudio was enthralling and an enjoyable experience with the sets of such hit sitcoms as The Golden Girls. The Paris equivalent suffers as the Studios is not a working production facility and therefore the “behind the scenes” tour seems false and unrevealing. The MGM version has languished with no substantial alterations since its debut as the Imaginners continue to funnel new projects and revisions into other areas of the park. The Tour at the WDSP may improve as the timing becomes synchronous and the tram drivers hone their skills (there were several substantial pauses on our tour as our driver had to let other trams pass in front of him). However, the tour is short and could be improved substantially in the future.