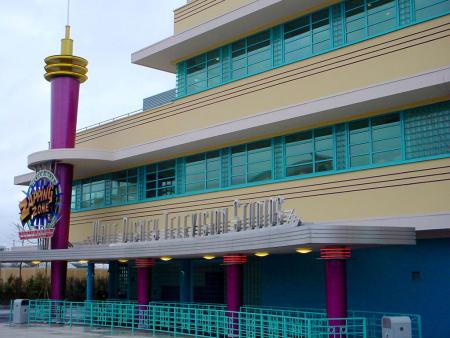 Television Production Tour at the Walt Disney Television Studios
Back in October, the Disney Channel France signed a lease agreement with EuroDisney S.C.A. to rent accommodation for the Channel’s own productions at the WDSP. The Channel moved their offices, production sets and post-production suites to the new building last November. The building has some beautiful Art Deco-style additions and the neon lights give a soft glow to the building after sundown. A mural has been painted on one side featuring a not-so-hidden Mickey!

To review the Tour at present would not be fair to the cast members who are trying to work in very difficult circumstances at present. The Disney Channel employees have not been particularly helpful and have clashed on numerous occasions with park designers, Imagineers and engineers. Originally, guests were to see all four of the television soundstages that occupy the production facility. However, at present, guests are only shown one soundstage that features the set of the popular daily childrens’ show, The Zapping Zone.

The Tour begins in an outdoor pre-show area where each tour is gathered. A countdown timer sits astride a 3x3 cube of television monitors that show clips from popular Disney Channel products such as Bear in the Big Blue House, Recess and their stablemates. The language issues are delicately handled as a presenter from each Disney Channel in Europe provides the necessary explanation for each show. At the end, guests are introduced to their tour guide and proceed into the building. The first section is a corridor bordering the editing and production suites for the Channel. Here, Buzz Lightyear from Buzz Lightyear Star Command explains what occurs beyond those glass viewing walls. Unfortunately, the text translations that straddle Buzz’s plasma screens were not working on the preview day and therefore only guests with excellent French linguistic skills could understand Buzz’s explanation.

Next, guests are shown the last of the four soundstages where The Zapping Zone is broadcast. However, this is an extremely dull affair unless the taping is actually taking place. Otherwise, it is just a set and even the lights are dimmed so it is difficult to make out the distant set pieces. In addition, as The Zapping Zone is a concept exclusive to the French Disney Channel, many guests would not understand the significance of the soundstage. One can only hope that the squabble between the Channel and the park is resolved in the near future, so the tour can be extended to take in the remaining three soundstages. 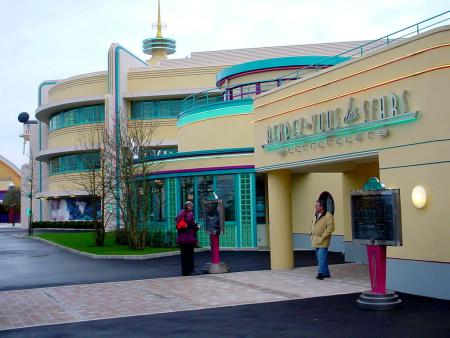