Various characters inhabited the shop, he said. There was Glendra von Kessel, the baroness, imperious and exacting. Leota Toombs, of course, became the Madame Leota of Haunted Mansion fame. Joyce Carlson was so identified with the whimsical dolls of it’s a small world, that she could be mistaken for one herself. And there was Rolly Crump, with his off-the-wall humor and design sensibilities. The sculpting shop was the home of Blaine Gibson, with his gallery of pirates and presidents.

But, continued Sklar, “The true heartbeat was the little corner where the Queen Bee held court.” It was where Walt and the others buzzed around. John Hench was often there, pontificating on the subject of the day. Here you would also find the Maestro, Fred Joerger. Marty chuckled as he recalled how he first misinterpreted Harriet and Fred’s devotion. He thought, frankly, that Fred was “on the make” for the married Harriet. But he came to realize that their banter was their way of keeping the “fun” in the fun business.

Sklar concluded his remarks by reading an essay he had written for the Disney Newsreel magazine. In it, he said the following:

In the hospital they were calling her "Sleeping Beauty," but I likened her more to "Snow White," waiting for the kiss that would awaken her. Alas, the princes and kings who could do it were already gone, awaiting her arrival in a safer place.

As the first non-clerical woman Imagineer, Harriet Burns had to earn the respect of a male-dominated world. Beginning when WED Enterprises was still located at the Studio, she had to be as good as the men were with a table saw, lathes, drill presses and, as she put it, "other stuff." And she was, even holding her own when the off-color jokes came her way. With her soft Texas twang, she could sling it right back at them.

But what really earned respect for Harriet Burns was her creative skill. She became a design star on The Mickey Mouse Club, helping to establish its modern, graphic style. With Fred Joerger and Wathel Rogers, she became the WED Model Shop, heartbeat of Walt's design engine for Disneyland and beyond.

For 31 years until her retirement in 1986, Harriet was at the center of every Imagineering venture: "figure finishing" presidents and pirates, creating enchanted color schemes and frillery for singing birds, putting the glitter, flitter and jewels on the children and toys of it's a small world. For her achievements, she was named a Disney Legend in 2000.

Harriet never dressed the part of the jeans and tee shirt set. Her eclectic taste and sense of design fashion carried over to her working attire. She was always the best dressed member of the Model Shop, perhaps all of Imagineering.

Maybe that's one reason she caught Walt Disney's eye and appeared so often in those un-scripted strolls through the Model Shop that Walt loved to use in the TV show lead-ins, showcasing the newest concepts for Disneyland or the New York World's Fair. But we all knew better. It was really because, from the Studio days when Disneyland was just getting started, Walt loved to get his hands dirty in the Model Shop. And to "kick back" from the pressures of running his growing empire by sharing stories and one-liners with the Imagineer with that sweet Texas drawl.

That's why, when her favorite princes – fellow Disney & Imagineering Legends John Hench, Bill Cottrell and Fred Joerger – lined up last week to greet Harriet Burns, I'm sure it was the King who was first in line. Because Harriet Burns was Walt Disney's favorite Imagineer.” 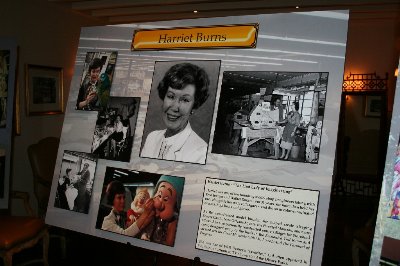 Final reflections were offered by Jim Sarno, a long time Disney colleague and friend of Harriet’s. He began by admitting his surprise at being called upon for the task. He had, you see, actually sneaked into Imagineering by way of the Model Shop. He didn’t know it at the time, but he took Fred Joerger’s place. “Little Jimmy,” he said mischievously, “who always dreamed of working at Disneyland, ended up right next to Harriet Burns. His work station was right between Harriet and Walt Peregoy. “We got in trouble a lot,” he chuckled, going on to say they goofed around, made a lot of jokes, and got the job done.

Sarno recalled a time when both Harriet and he were out sick. When they returned to the shop, the others noted that both were gone on the same day. What about that? When it happened a second time, there were more gentle ribs and comments. After it happened a third time, Harriet told Sarno to beat them at their own game, and tell they had run off to Acapulco and gotten married!