Disney’s Zootopia dominated the box office last weekend and now Shakira’s “Try Everything” is on it’s way to dominating the music charts. The catchy Gazelle tune bookends the beginning and end of the film with an inspirational message, empowering lyrics and unforgettable melody from hitmaker Sia Fuller. My hips have been shimmying to this song for a while now, and my hips don’t lie. If you haven’t seen the film yet, the music video offers quite a few clips and if nothing else, offers another chance to hear my new gym jam. 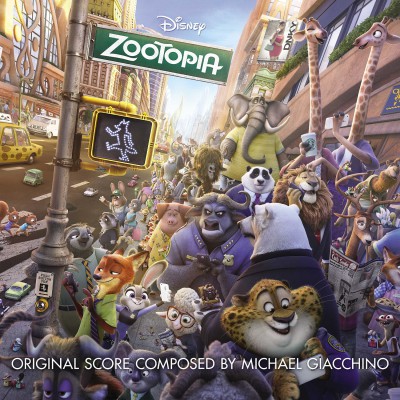 “Try Everything” kicks off the 22-song Zootopia soundtrack and the rest of the album presents the film’s score by Michael Giacchino. While he has had an impressive career composing music for Disney live action films, theme park attractions, TV shows and Pixar films, this is surprisingly his first Walt Disney Animation Studios animated feature. For those wondering why his name sounds familiar, his score from Up definitely made you cry and I bet you can’t forget the cute melodies from last year’s Pixar blockbuster, Inside Out.

Giacchino’s score for Zootopia is as diverse as the animal city itself. “Ticket to Write” is a South American infused calypso that emphasizes Judy Hopps’ determination to break the ticket writing record. Latin rhythms meet gospel instruments with “Jumbo Pop Hustle.” Bollywood themes consume “The Naturalist” while the composer’s Italian roots can be heard in “Mr. Big.”

For the most part, the score from Zootopia is a departure from Giacchino’s past work and listeners may at times forget who the composer is. But a few tracks offer some similarities to past works, such as “Hopps Goes (After) the Weasel,” which feels related to The Incredibles. A tension-setting theme found during “Some of my Best Friends are Predators” also brings me back to the days of Lost. And some Inside Out influence can be heard in the most upbeat parts of “Gotta Get to the ZPD.”

With so many melodies and styles, the only thing that the Zootopia score is missing is a takeaway melody that will instantly bring you back to the story. There is a somber tune that is possibly the most reoccurring theme in the score, played during both Judy Hopps and Nick Wilde’s sadder moments in the film. But it lacks the whimsical ditties like he wrote for Up and Inside Out, leaving Shakira’s pop song as the track that you will associate most with the film over any score elements.

Michael Giacchino’s score for Zootopia is an impressive masterpiece of culture infusions and styles that will leave you feeling cultured after finishing the album. The physical CD features a fold-out book with lyrics to “Try Everything” and images of some of the film’s animal cast. And the final track, “Suite from Zootopia,” offers a great sample of the melodies in the score. If you’re a Giacchino fan, this diverse soundtrack deserves to be heard outside of the film.