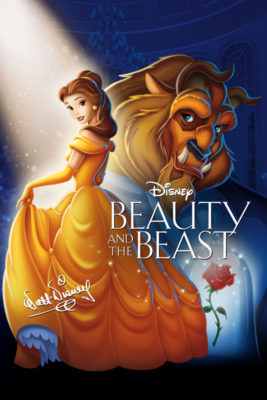 For twenty-five years, Disney’s animated masterpiece Beauty and the Beast has been enchanting audiences with its spellbinding tale of inner beauty. In celebration of its silver anniversary, Disney is re-releasing one of their best-animated classics as the second title in The Walt Disney Signature Collection. Starting with Snow White and the Seven Dwarfs earlier this year, the Signature Collection presents the studios’ most iconic animated films, which follow in the legacy of Walt Disney’s first animated feature.

Beauty and the Beast is now available digitally from all major providers, including iTunes and Amazon. Anyone looking for the film on Blu-Ray or DVD will have to wait until September 20th, as the film is a digital exclusive until that date. And while there are some new bonus features for this release, the majority of previously released content is exclusive to the digital edition.

A cursed prince, an enchanted castle, and a beautiful outcast set the scene for Disney’s Beauty and the Beast. When Belle finds herself a prisoner in the Beast’s enchanted castle, she unintentionally warms the heart of the cold prince trapped within. But the prince must earn her love in return to break the curse, a daunting task, “For who could ever learn to love a beast?”

Disney advertises that the digital version comes with three versions of the film. By default, it plays the Theatrical Version (the 2010 version with the new castle intro and a few modifications). From the “Movie Selection” menu, you can also choose the Special Edition, featuring the additional song “Human Again.” A Sing-Along version makes its debut with this release, the same version that had a limited theatrical run in 2010, and it’s actually offered twice in both English and French. This section also offers the Work-In-Progress version and an audio commentary, more on both of those under the “Bonus Features” heading.

If you’ve already embraced the digital future, then you can enjoy the Signature Edition of Beauty and the Beast two weeks early. Those who would rather wait for September 20th will also get this version with the Blu-Ray/DVD/Digital HD combo pack. But with a bigger collection of bonus features and more viewing options, the Blu-Ray and DVD will have less to offer individually than this digital version does.

Using iTunes’ 1080p presentation through an Apple TV, Beauty and the Beast looks almost identical to the 2010 Blu-Ray release. This is mostly because it uses the exact same transfer of the film for both the Theatrical and Special Edition versions, and even the Sing-Along uses the same transfer with the added entertainment value of bouncing lyrics. Fine details in the backgrounds are present and colors are bright and vivid. Digital HD has come a long way and now comes pretty close to matching the capabilities of Blu-Ray.

The English 5.1 audio track uses the full sound field effectively to envelope you in the film. It’s a fantastic sound mix that mirrors the 5.1 mix on the previous Blu-Ray and DVD and is only improved upon by the 7.1 track, which is exclusive to Blu-Ray, even from Vudu who supports that many channels.

The bonus features on this release are so expansive that they needed an additional page. Go to page 2 to see everything that’s included with this release.