When one of Marvel Comics’ most dangerous bad guys is looking to atone for his sins, do we forgive him? Can bad guys reform and become good people? These are two of the questions the reader is confronted with when they read Infamous Iron Man #1. The first word in the title is your first sign that this isn’t your ordinary Iron Man story. 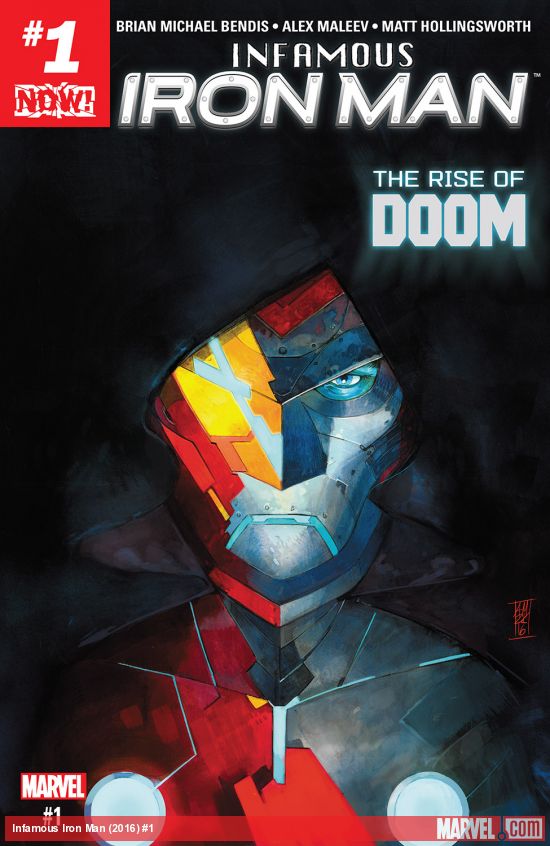 The book starts off with what we know best, a cabal of bad guys with some well-known faces. Dr. Victor Von Doom is in charge, and after being pestered by an annoying member of the group Doom blasts him into infinity. When asked if Doom killed the guy, Doom replies that he just banished him to India. Doom’s look as he ‘banishes’ the thug is menacing and scary. Credit should be given to Alex Maleev and his artwork for these important scenes because you can see the wrath in Doom’s eyes.

We think Doom is up to no good but we see him shortly after walking around in normal human clothes without a sign of his menacing Dr. Doom look. Victor Von Doom is on a mission of rehabilitation. After rescuing a captured Maria Hill from the clutches of Diablo, we find Doom in in Tony Stark’s lab where all of the Iron Man suits are waiting for an occupant.

Doom once says in the book, “My reputation precedes me.” He’s not kidding. In one way or another he is considered to be one of the most dangerous men in the Marvel world. Thousands have either been killed or hurt based on Doom’s actions, and now at this crossroads in his life, Doom is looking for a makeover.

Confronted with an AI projection of Tony Stark, he questions Doom about his intentions and warns him to leave because the Avengers have been alerted to his presence. We as the reader watch as Doom stares at the many Iron Man suits and you can see not only in the visuals but the text as well how much he covets what Tony Stark made.

Doom says he must pick up the mantel dropped by Stark. Suiting up in an Iron Man suit, Doom flies off to begin this new chapter in life. But is it a new chapter, or is it just another spin on his maniacal ways? In the beginning of the book Doom is questioned about his intentions by his evil cabal. He is rich beyond his wildest dreams, he runs his own country, and he even fought an evil demon for the soul of his mother and won, so what else does Dr. Doom want.

It seems like we know what that is. Respect, perhaps fame more than infamy. Maybe, Doom wants to turn the corner and start over. When he has so much that was gained through evil means, Doom just might need to clear his conscience.

Brian Michael Bendis has crafted a unique tale which leaves the readers wondering, should we trust Victor Von Doom. Bendis is famous for his long run in Marvel Comics, and he takes this opportunity with Doom and the Iron Man suit to question our perspectives as well as our acceptance.

With Doom flying off into the nighttime sky, we wonder will Doom carry the mantel of what Iron Man stands for in the right direction, or will he stain it with his deeds and turn the once famous Iron Man into the infamous Iron Man. We shall see. How many good deeds does anyone have to do before they are forgiven for their sins?