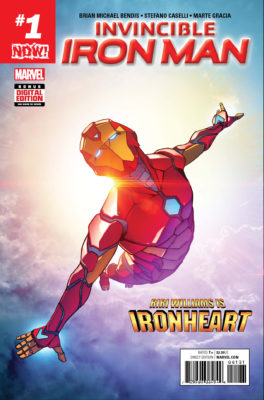 For those readers that are about to start on a new version of Iron Man with Invincible Iron Man #1, brace yourself, we have an origin story in this book. Starting in Chicago ten years prior to the current setting of the story, we meet young Riri Williams. As the standard superhero origin story goes, we learn from a doctor figure that Riri is a super genius. Riri becomes bored easily and needs to be reassured constantly. Riri’s mom and step-dad are told to remind Riri that every day is a nice day.

Fast forward to five years later and Riri is ten years old and showing her super genius abilities. Rather than doing what most 10 year olds do like playing at the park, Riri is spending time in the garage creating. Along comes her soon to be best friend and we see a friendship born. 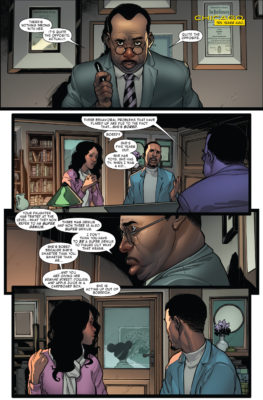 When the story takes off to the present setting, Riri is in her own Iron Man suit, battling against Animax, a mutant who has the power to grow monsters. Their battle takes place in the middle of Cheyenne, Wyoming, and it is pretty standard fair.

Riri is learning to use her abilities for good, and though her victory is not immediate, she does learn how to be victorious in the fight. Good must triumph over evil, and we have a new hero. 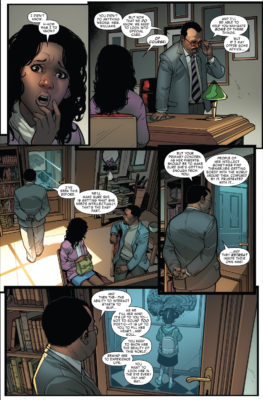 How on earth do you replace Tony Stark? He is the most brilliant and admired character in comic books. He has the skills and money of Batman, and the sophistication and suaveness of James Bond. Who could replace this man as Iron Man? It turns out a young African American 20 year old girl named Riri Williams can.

Writer Brian Michael Bendis who has contributed on a variety of Marvel Comics series like The Avengers, continues to influence the growth and evolution of Marvel Comics with a standard origin story, which he repurposed with something new and fresh. 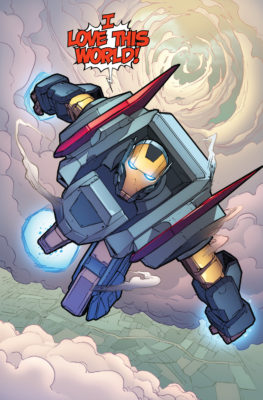 Unlike Tony Stark, Riri is figuring this superhero business out as she goes. She does not have billions of dollars at her disposal. In fact she is still living at home with her Mom in Chicago, tinkering away in her Mom’s garage.

Is this an origin story like every other comic book story? Yes!

In this day and age, rather than keeping the exact same characters just restarting the same story lines, readers have a chance to see a new version of the character they have known so well. Artist Stefano Casselli has created the visual world that we recognize as Iron Man. So we as readers are comforted by a familiar suit, and a familiar look for this new journey.

Much like watching the growth of Spiderman played by Miles Morales or Victor Von Doom as Infamous Iron Man, Marvel is giving their most famous character a new life, and a new identity. In the age of reboots and sequels, it must be hard to tell a new story with an existing property. With Invincible Iron Man #1 we get Ironheart, we get Riri’s story which mimics Tony Stark, but it provides a fresh perspective.

Brian Michael Bendis has created a new spin that was no doubt difficult to do, but he succeeds on all levels. The story is engaging and enjoyable. The thrills of an Iron Man comic are delivered, and we get emotional depth as we follow the beginning of Riri Williams.

But we get one more surprise. Riri needs an artificial intelligence to help run her suit. She receives a package in the mail that ends up being the artificial intelligence she needs to make her suit fully functional. It just so happens to be the physical essence of Tony Stark. I guess since he failed to stop Doctor Doom from becoming Iron Man, he decided to go help someone who really needed him.

It wouldn’t be an Iron Man comic without Tony Stark.