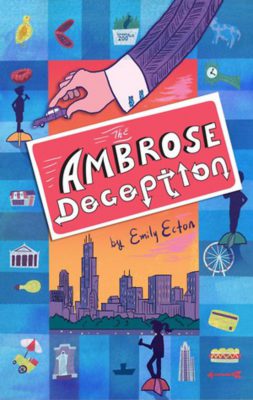 I’m always surprised when I meet people who grew up in a big city, but have spent their entire lives avoiding the “tourist attractions” that make it special. In The Ambrose Deception by Emily Ecton, readers will meet three such people. The city in question is one I know well, Chicago.

Three middle school students are plucked from their mediocre lives and put in a clue-based scavenger hunt competition that could grant them a $10,000 scholarship. Melissa, Bondi, and Wilf are not top students, so it’s puzzling to everyone at their three respective schools when they are selected by name. Each suddenly has a personal driver, charge card for competition related expenses, and a cell phone, albeit an old flip phone. Each is given three puzzles to solve and one of the numerous rules is that they can’t unite to solve them or share their clues with anyone.

At the same time this “Kaplan/Baron” competition is going on, one of the wealthiest men in the world passes away. The news of Enoch Ambrose’s death is inescapable, but the kids stay focused on solving their puzzles and taking pictures of the locations around the Windy City that they’re lead to. But as they progress through the challenges, they can’t help but feel that the competition’s facilitator, Mr. Smith, isn’t being completely honest with them. Especially when one of the kids finishes their clues only to find that a winner won’t be announced until all clues are turned in.

The Ambrose Deception features three unique and relatable main characters that readers will instantly connect with. The challenges are fun and will also teach readers some really neat facts about Chicago, some of which were a delightful surprise, others took me back to many a field trip or family weekend as a kid. The scavenger hunt competition premise reminded me of Disney’s Midnight Madness, as well as the stage musical version of Freaky Friday, but the execution here is quite different.

Another reason I loved The Ambrose Deception is that it reminded me of one of my favorite childhood authors, Roald Dahl. There’s an element to this story that reminded me of Charlie and the Chocolate Factory, with a few sprinkles of Matilda (minus the magic). I also believe there’s a John Hughes reference or two, including a nod to one of the greatest films ever set in Chi Town, Ferris Bueller’s Day Off.

The Ambrose Deception is sure to inspire kids to dream big and find a path that will see them through. Melissa, Wilf, and Bondi are each proof that anybody from anywhere can achieve greatness with hard work and determination. Best of all, if your reader lives near or will be traveling to Chicago, this book is a perfect way to give them some really fun facts about the Windy City.