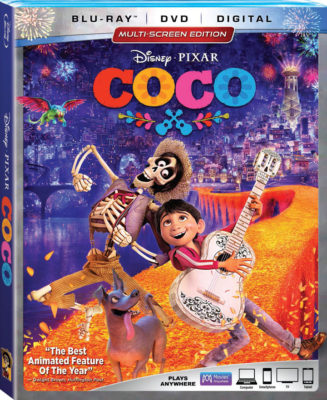 Disney Pixar’s Coco took audiences around the world on a spiritual journey that brought families closer together. Coco is more than just another great animated film, it is a return to form for Pixar in a world dominated by sequels. And now, this jewel of a film can be yours to cherish forever on Blu-Ray/DVD/Digital HD Combo Pack.

Miguel is the son of a long line of shoemakers, but his dream is to play music like his idol, Ernesto de la Cruz. His family, however, has banned music due to a family rift several generations ago. On the eve of Dia de los Muertos, Miguel steals a guitar from a mausoleum, unintentionally setting off a curse that traps him in the Land of the Dead that gives him until sunrise to get his ancestor’s blessing to return to our world without any stipulations against playing music for the rest of his life.

With an all Latino voice cast (and John Ratzenburger) and authentic representations of Mexican culture, audiences will feel like they’ve really taken a trip to Mexico during the two-hour runtime. The film becomes somewhat of a love letter to Mexico, which lends itself so beautifully to animation. The familial celebration of Dia de los Muertos comes alive on film like never before.

The music grabs you from the moment the film starts, with a mariachi version of the Disney studio intro, as well as the Oscar nominated song, “Remember Me.” Michael Giacchino’s memorable score perfectly plays against every story beat and emotion. Music is such a vital part of the film and it’s so perfectly executed, creating a beautifully harmonious piece.

With immaculate detail and hidden gems throughout the film, you and your family will want to share Coco together again and again. With over 2-hours of advertised bonus features, fans who want to step behind the scenes can learn everything there is to know about the behind the scenes process. And for those who just want the Coco experience, rest assured that Olaf is nowhere to be found in this release.

The only bonus features on the DVD are “Dante” and the audio commentary.

The Blu-Ray presentation of Coco is stunning. The colors are so bright and vivid, particularly in the Land of the Dead sequences, and black levels are perfectly rendered. I didn’t detect any flaws, such as banding or aliasing, in the Blu-Ray transfer.

On DVD, detail is softened all around, losing a lot of detail. For example, individual strands of hair on Miguel’s head are easy to see on Blu-Ray, whereas the DVD becomes a blurred blend of black. The color spectrum also feels compressed, never achieving the same level of brightness or darkness in standard definition. Shots of the City of the Dead almost look blurry, including in the main menu.

Audio options on Blu-Ray include English 7.1, 5.1, 2.0, and a stereo Descriptive Audio mix. There are also French and Spanish 5.1 tracks. For this review, I experienced the film in the 7.1 DTS HD Master Audio mix, which feels so immersive. It’s amazing the way the mix throws sound around the room, often mid-sentence when a character runs off screen. It really feels like their voices travel and the effects and music fill the rear speakers well.

DVD audio options include English 5.1, 2.0, descriptive audio, and Spanish 5.1. Compared to the 7.1 Blu-Ray mix, the 5.1 track feels less impressive. However, it’s a solid 5.1 mix for those lacking the extra speakers.

Inserts include a code for your digital copy through Movies Anywhere, which also earns 150 points through Disney Movie Rewards, and a flier for Disney Movie Club.

Both discs open with an ad for The Incredibles 2. Selecting “Sneak Peeks” from the menu plays additional ads for Disney Movie Rewards, Disney Now, and Star Wars: Forces of Destiny (a whole short – “Ewok Escape”). The menu features score set to a panning shot of the Land of the Dead.

Disney Pixar’s Coco is nominated for Best Animated Feature and Best Song at the Academy Awards for good reason. Now you can bring home the Golden Globe winning animated feature that has touched so many families. The Blu-Ray/DVD/Digital combo pack comes with hours of bonus features, dazzling picture and sound, and is sure to be a treasured part of your movie collection.