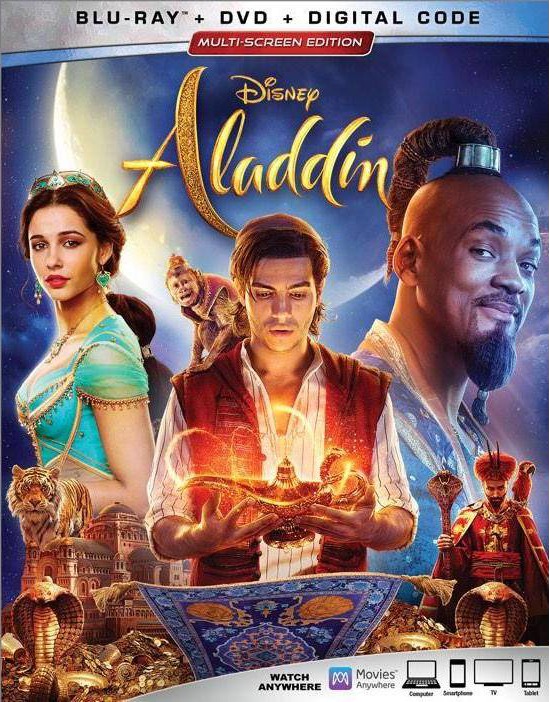 Disney’s live-action retelling of Aladdin received its fair share of criticism, but ended up charming and delighting more than it disappointed. Worldwide audiences were fond of it, allowing the film to surpass the $1 billion mark, making it one of Disney’s five films to do so already in 2019. If you were wishing to see it or see it again, your wish can now be granted with the home video release on 4K, Blu-Ray, DVD, and Digital.

Aladdin is a struggling street rat who dreams of a charmed life, while Jasmine is a princess whose sole purpose in life is to give Agrabah its next Sultan through marriage. Their paths cross when they meet in the market, but they are soon torn apart by the villainous Jafar who will stop at nothing to become the next sultan. When Aladdin finds a magic lamp and unleashes the Genie within, he finds himself on a wild adventure to save Agrabah from Jafar’s manipulation in hopes that he can be reunited with the love of his life.

It’s the story you know well from the 1992 animated classic, but with a few 2019 updates. Most notably, Jasmine’s character is expanded and empowered with more action and a song of her own (“Speechless”) written by Alan Menken. Jafar is darker and more sinister and side characters who were more silly in the original, such as the Sultan, are played as more realistic.

Mena Massoud (Aladdin) and Naomi Scott (Jasmine) very much steal the show this time around. Will Smith’s Genie is likable, primarily when he is passing as a human and trying to woo Jasmine’s handmaid, played by Nassim Padrad. But when he’s in the blue CG suit and given line-for-line dialogue that Robin Williams made iconic twenty-seven years ago, the performance pales in comparison to Williams’ impossible-to-fill shoes.

While it may have a few shortcomings, 2019’s Aladdin still manages to make a wish come true with a dazzling live-action adaptation that recreates much of the magic of the original. The story and unforgettable songs come alive in a whole new way and now you can take the film wherever you go with the Blu-Ray/DVD/Digital Multi-Screen Edition, whether traveling by car, train, plane, or magic carpet.

Aladdin his a somewhat soft visual esthetic, but the Blu-Ray presentation shows excellent detail when they are intended to be in focus. The bold color spectrum is replicated expertly, with brightly colored garments popping off the screen.

The primary audio mix is a 7.1 DTS-HD Master Audio track. The mix is never distracting, with sound floating from speakers in a natural-sounding way. Other audio options include French and Spanish 5.1 and a 2.0 English Descriptive Audio track.

Aladdin is housed in a standard Blu-Ray case with disc holders on both sides of the interior. The slipcover features an embossed title and holographic effects. Inserts include a digital copy code through Movies Anywhere and a flier for Disney Movie Club.

The disc opens with ads for Maleficent: Mistress of Evil and Frozen II. The main menu features a reel of clips from the film set to Alan Menken’s score.

Aladdin recreates the spirit and magic of the original film in a whole new way. The bonus features reveal an unheard Alan Menken song, deleted scenes, and enough behind-the-scenes footage to give you an idea of how the film was made despite lacking a true “Making-of” feature. While it doesn’t surpass the original animated classic, it does a worthy job of paying homage while freshening it up for a modern audience.