Into the Unknown: A “Frozen II” D23 Event

A D23 event rarely comes north of the border to Canada, but when it does, the event sells out. On Monday, November 4, fans from across the Toronto area packed the Scotiabank theatre in Toronto to get a glimpse of Frozen II. This was a Frozen II event, featured the principal cast of Josh Gad, Idina Menzel, and Kristen Bell who were there to start their worldwide promotional tour for the upcoming film. 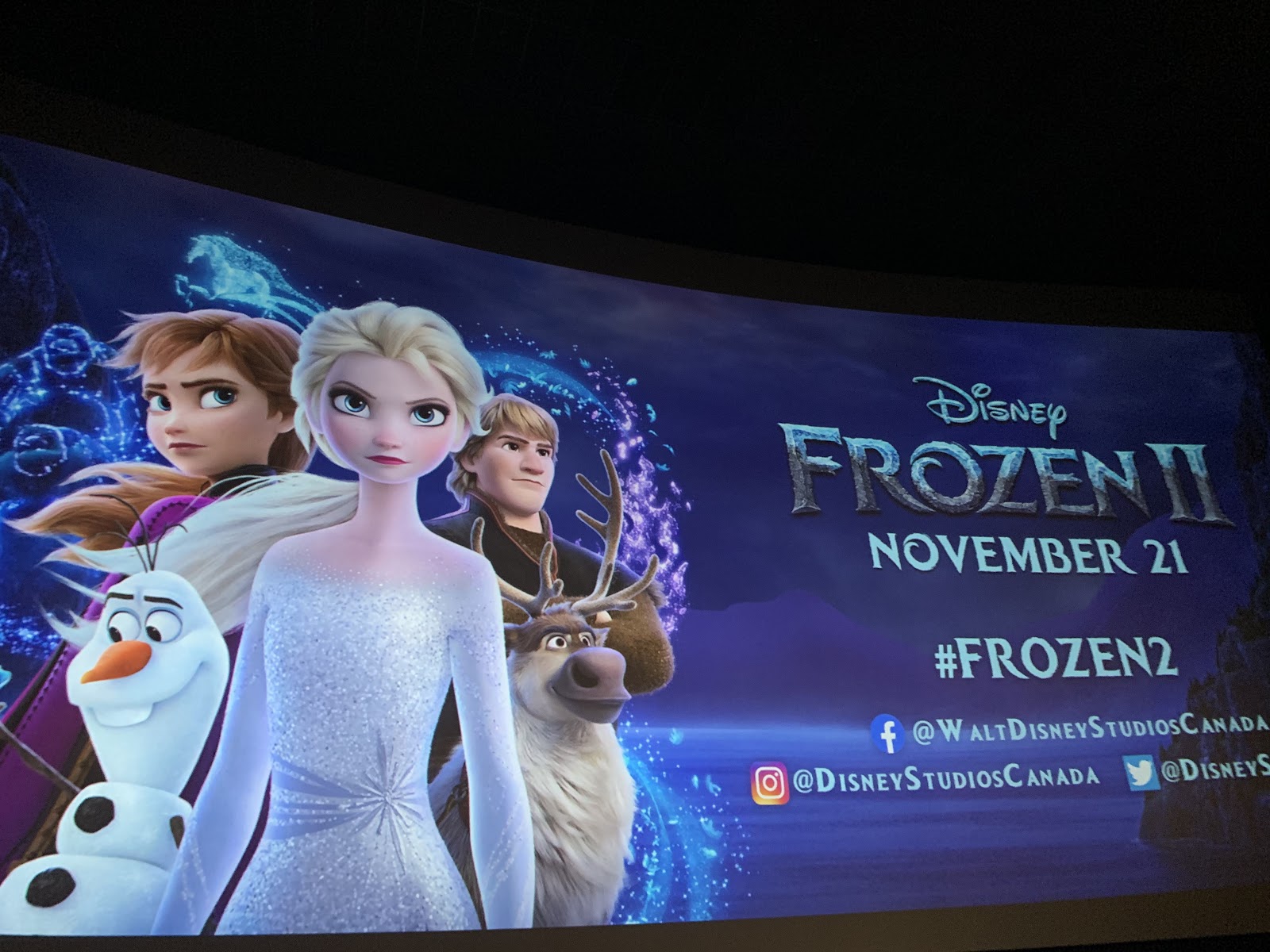 Having never been to a D23 event and being a new member to the fan group, I was intrigued by the adventure and couldn’t pass up the opportunity. Much like the soon to be hit song from the forthcoming, I felt like I was traveling into the unknown with this event. When I arrived at the theatre I was surrounded by posters for the upcoming blockbuster, and a line of people anxiously waiting to get into the theatre. The admission time was a mere two hours away. This being a Disney event, I joined the line and waited my turn. One lady behind me was wearing a D23 shirt and gushed about how exciting this was. The last time she remembered a major event coming to Toronto was with Newsies.

The hubbub of the line faded as we progressed to the entrance, my name was on the top of the D23 list. I received my pass, walked by the press line fan zone where the cast would possibly pose for a picture with you and I made my way into the theatre. I wanted a front row seat.

Just a few steps away, I settled into the theatre to wait. And wait. And wait. Then I waited some more. Over an hour after gaining my admission to the theatre, the countdown clock began, and we were treated to commercials for Disney + and theatrical releases. Once the adds ceased the screen went blank and guests got up and sought the bathroom and snacks at the concession stands. So many Anna and Elsa cosplayers, from young to old were filling the theatre by now. 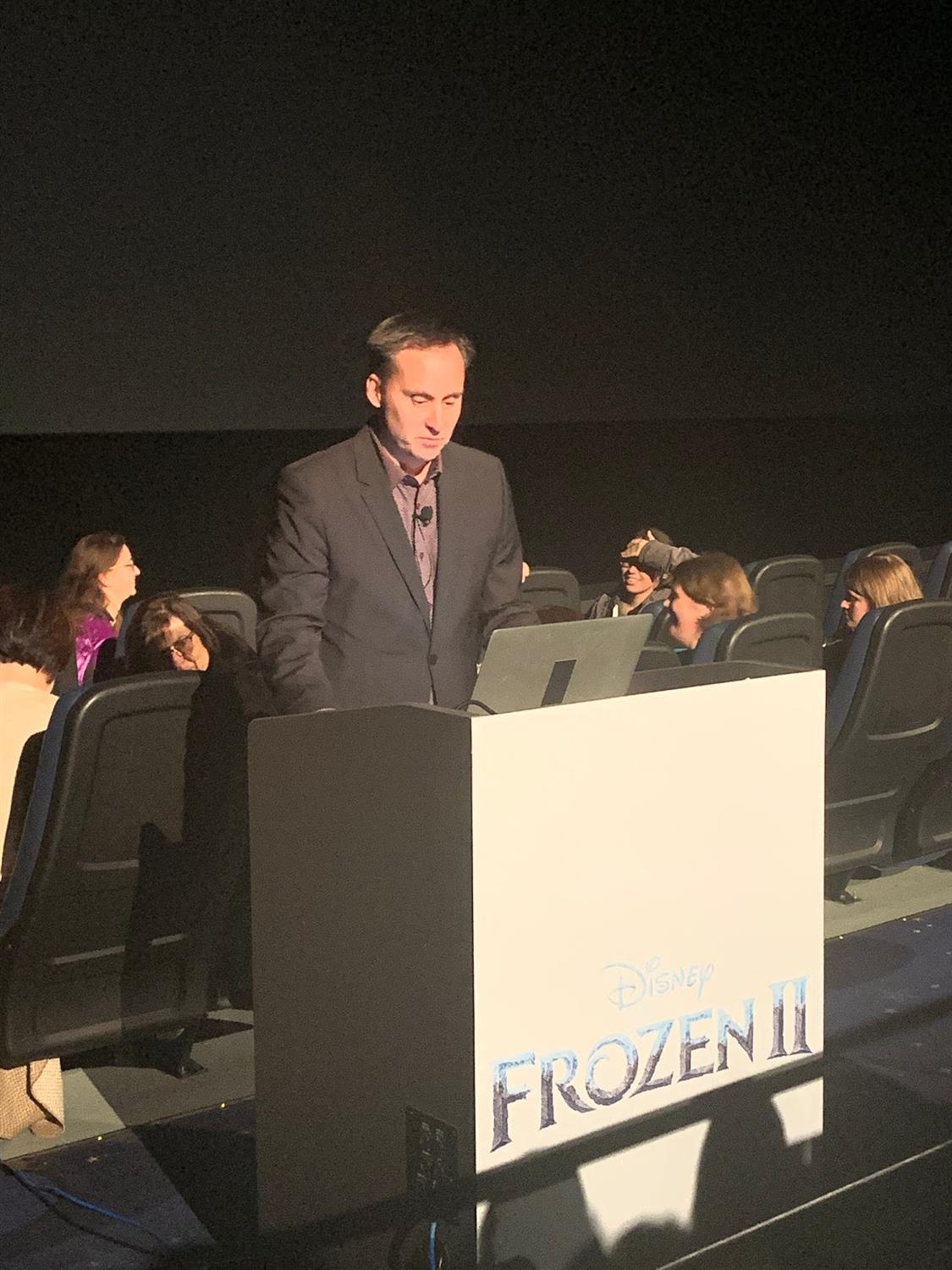 The show commenced with Greg Mason, Vice President of Marketing for the Walt Disney Studios in Canada. Standing in front of a podium with Frozen II emblazoned on the front, he welcomed us to the event, and started talking about the film that everyone in the theatre was so eager to see.

How does a film like Frozen II get made? This was Greg’s beginning which led to behind the scenes look at how the Frozen II research team journeyed to Norway, Finland, and Iceland. Documenting their trip, the team traveled through the calm seas of the north photographing the icebergs that dot the landscape, the waterfalls, and valleys, and even climbing to the top of a volcano.

Greg had the crowd in the palm of his hand. He talked about how at Walt Disney Animation, sequels are not a regular outing. He mentioned that this was the first theatrical sequel to an animated musical, and that Frozen II was only one of a handful of sequels they have made over the decades.

So how is life in Arendelle? Greg brought us up to date with Anna, Elsa, Olaf, Sven, and Kristoff. Its been three years since the events of Frozen. Everyone is happy, at least it seems that way. Elsa is working hard to be the queen that everyone in her kingdom needs, and Anna is doubling her efforts to protect her big sister. Olaf has a permafrost coating thanks to Elsa, so now he can enjoy summer.

While everything looks good on the outside, life is not so great for Elsa. Greg brought us to a scene called family game night, where Elsa and Anna are competing against Olaf and Kristoff. The boys easily win the game of charades because Elsa cannot concentrate. A distant voice is calling to her. Elsa doesn’t want to repeat the mistakes of the past. She doesn’t want to put the kingdom at risk again. In the middle of the night, Elsa awakes to this mysterious call and launches into a song called “Into the Unknown,” which captures the mood of Elsa now, as much as “Let it Go” introduced us to Elsa in the first film.

The song is magnificent! The vocals of Idina Menzel and the power of her voice in the song had the audience cheering. Every good song ends though, and for Elsa it all stops as ice crystals are formed and the five elements are seen. Earth, Wind, Fire, Sky, and Sea are all symbolized on the floating ice pellets. A threat is now unleashed on the kingdom. The ground starts to shake, and the elements of the earth start to attack. Everyone evacuates and the scene ends with Greg coming back to the microphone.

Frozen II is all about family. Elsa does n’t know who she is. She wants to know why she has these magical powers, and until she understands her past, Elsa will continue to worry about her place in the kingdom as Greg picked up after the scene.

Our final look at the film came from the scene that everyone has watched by now. Elsa alone on the beach trying to make her way out into the ocean. With her ice powers she can gain some distance, but in this scene, we watched as a spirit horse attacked and battled Elsa.

Elsa is looking for her place in the world. She is queen of this kingdom and she is constantly worrying about making a mistake like the last time. On the outside, she is the queen, but to Elsa it feels wrong. Frozen II is about her journey to understand her powers, and to fight a force that might be too much for her own unique abilities.

Anna has always been at her sister’s side ready to walk into the unknown with her, but Frozen II looks like it is setting Elsa up to walk a path on her own. On this journey that everyone will start in a remote mysterious place, the past will come back to haunt Elsa and Anna, and the history of their parents will decide their future.

Greg Mason whipped the crowd into a flurry of anticipation and assured us all as he closed his presentation that when Frozen II opened November 22, all questions would be answered, and we would certainly enjoy the show. I am one fan who will be there opening weekend to see what happens to these beloved characters as they journey into the unknown. Frozen II opens in theatres November 22.