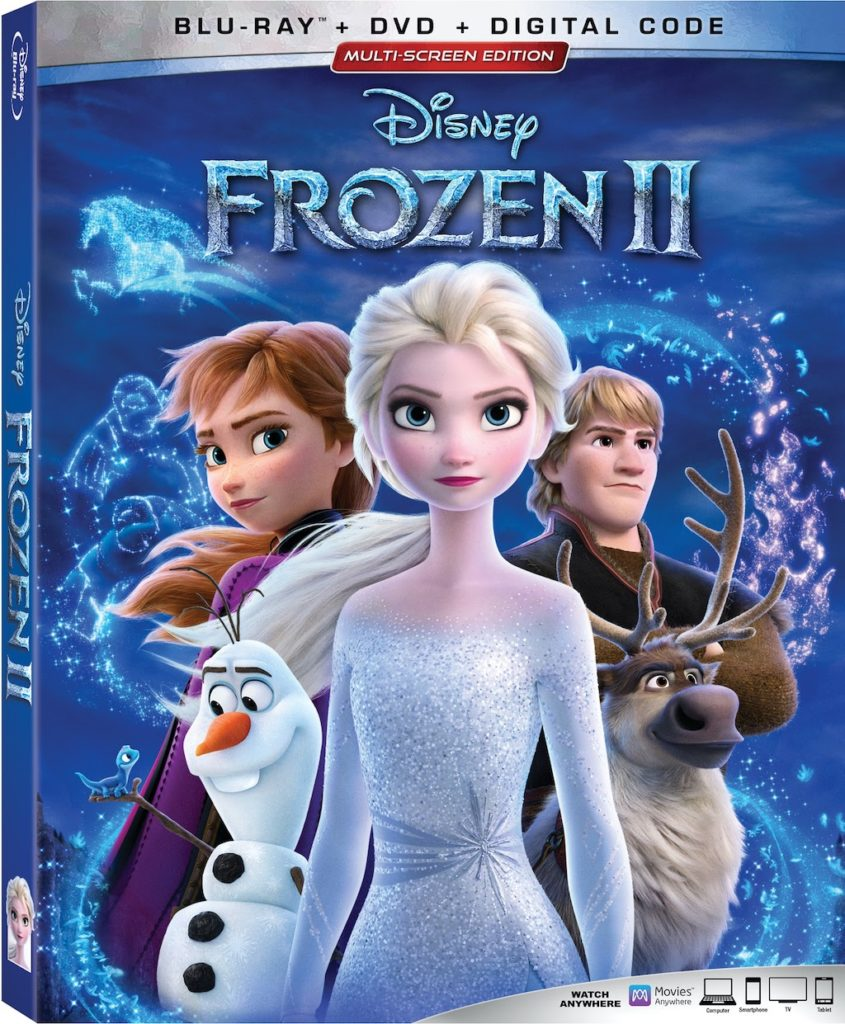 Walt Disney Animation Studios 58th animated feature Frozen 2 helped make 2019 the studios highest grossing year of all time, earning nearly $1.5 billion worldwide. Audiences were inspired and touched by the continuation of Anna and Elsa’s journey, a story the filmmakers envisioned as one complete story when paired with the original film. Relive the adventure time and time again with the Blu-Ray/DVD/Digital Multi-Screen Edition.

Life in Arendelle is seemingly normal, but Elsa is secretly haunted by a musical call from the impenetrable enchanted forest. When she finally gives in to the voice, the elements of nature go haywire in the kingdom and Elsa sets off on a quest to return things to normal with Anna, Kristoff, Olaf, and Sven in tow. But once inside the forest, they discover secrets of the past provide answers to some of their biggest questions.

It’s easy to see why audiences were so taken with the film, with seven new and memorable songs from Kristin Anderson-Lopez and Bobby Lopez, including the Oscar nominated “Into the Unknown,” the 1980’s rock ballad “Lost in the Woods,” and the haunting lullaby “All is Found.” Music was such a big part of the first film and the songwriters rose to the challenge with the sequel, although none of the musical moments feel as iconic as in the original.

The themes of Frozen 2 touch on current events. Anna and Elsa know a version of the past that isn’t true, discovering a hard truth about a hero of theirs who did something bad before the events of the first film. There’s also a message about finding your own place in the world, wherever that may be, even when it defies societal expectations. And there’s also a message about how colonies should treat indiginious peoples who neighbor their land. Frozen 2 speaks to a lot of current events in a healing way.

That being said, the plot is thin, the answers are vague, and Frozen 2 is more successful when you approach it from a less analytical viewpoint and just explore how it makes you feel. If you pause to dissect the diverging plot lines and their necessity, you’ll find that the story is more like water than ice. It tries to make an ensemble piece out of a single character’s journey and likely would play better if Kristoff, Sven, and Olaf didn’t come along for the journey.

When a film hits all the right emotional beats, it’s easy to overlook its faults. The Academy of Motion Picture Arts and Sciences recognized the film’s issues and it wasn’t nominated in the Best Animated Feature category as a result, but there are still plenty of reasons to love Frozen 2. If you’re a diehard fan you’ll want to pick up the DVD, Blu-Ray, and 4K release as soon as possible.

The Blu-Ray release is housed in standard packaging with disc holders on either side of the case. Inserts include a flier for Disney Movie Club and a digital copy code redeemable through Movies Anywhere. The case comes with a holofoil slipcover.

The discs open with ads for Onward and Mulan.

Frozen 2 doesn’t quite live up to the grandeur of the original film, but takes the characters you love on a new adventure with memorable music and powerful emotions. This Blu-Ray release reveals behind-the-scenes secrets throughout the many bonus features, including deleted scenes and songs. The film will inevitably come to Disney+, but most of the bonus features will remain exclusive to the home video release.