As Halloween 2021 gets into full swing, it is time to head out of the Orlando area to one of my favorite events of the season: Howl-O-Scream at Busch Gardens Tampa Bay. Growing up, I always loved the smaller and more original haunted houses that would pop up. That is exactly what Howl-O-Scream is all about, setting up houses to scare you that don’t depend on big name monsters but also tell a great story. 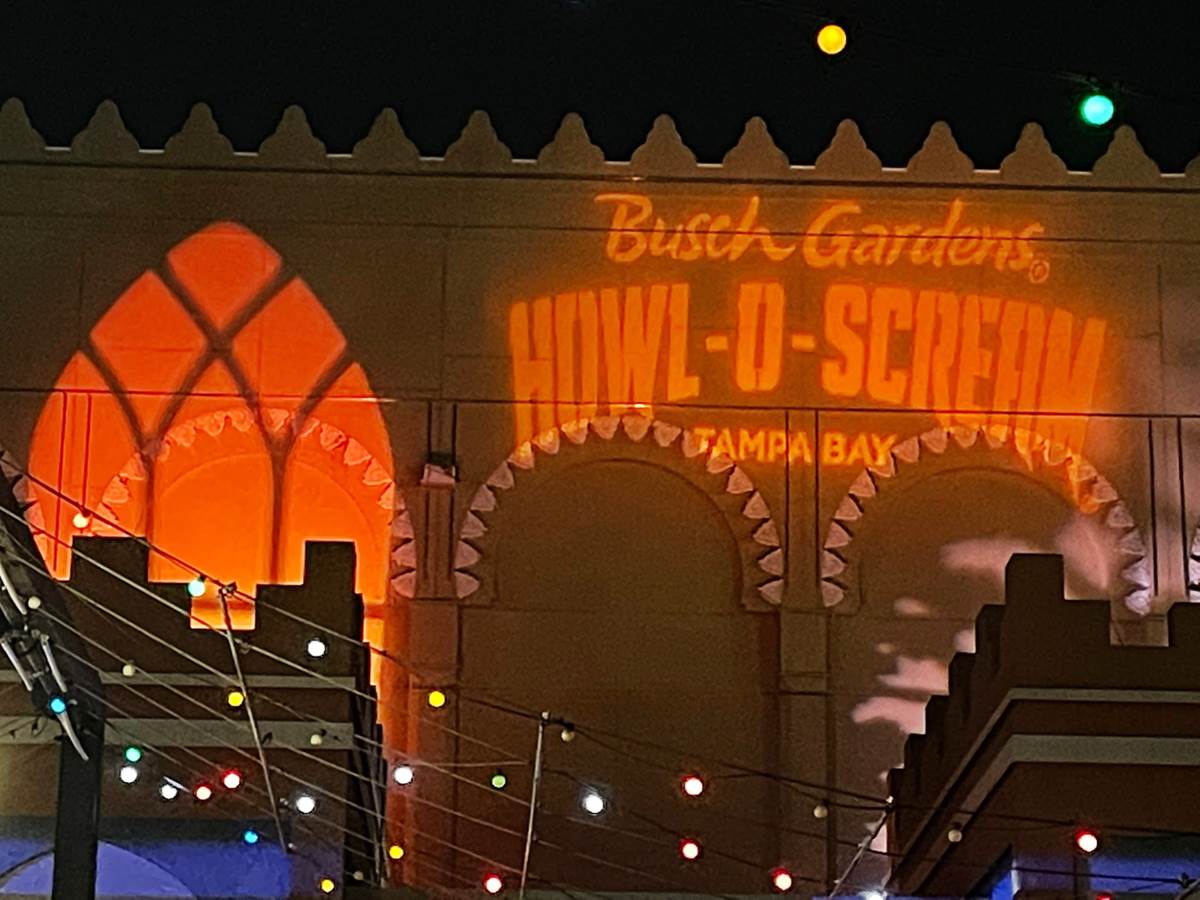 With five houses, scare zones a plenty, and some of the best coasters in the world Howl-O-Scream is always a must do. 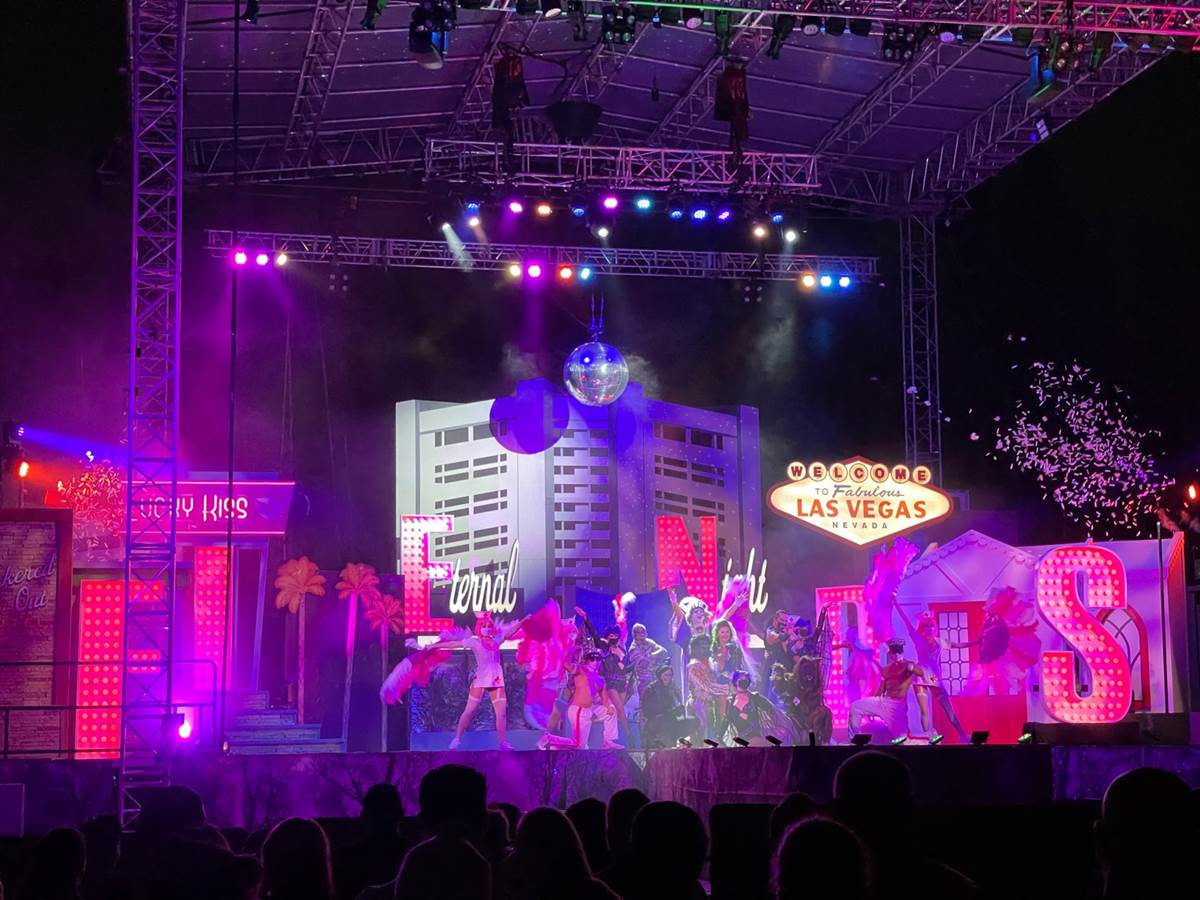 I start with the shows of Howl-O-Scream because, sadly, this is one of the areas the park does not excel in. Other than the iconic “Fiends!” show, there isn’t much to see. Of course, that isn’t to say “Fiends!” should not be on your evening itinerary. This long running show is a mix of talented dancers, current music, and more inappropriate jokes than you can shake a stick at. The show changes from year to year, lampooning current news and adds in its fare share of fun. This year's outing follows the same beats with Dr. Freakenstin and Igor summoning classic monsters of the past to “Las Vegas” rock out on the Festival Field Stage.

There is also a cover band in one of the other venues, the “Rolling Bones,” which I missed but heard they were entertaining if you happened to sit down to eat or relax plus a few dance parties.

As I said at the beginning, the houses at Howl-O-Scream for me make the event worth every penny. They go all out in not only creating a great story but also making sure each one is different from the last. Some events put up a lot of walls and find places for the scare actors to pop out at you. Busch Gardens works with the DNA of the park, they find locations throughout the park that aren't being used and find a way to weave a story into it. Now, I won’t say every house is a homerun, but as you will see in the video below there’s always a few good spots no matter how good or bad the house might be.

Here are what houses are offered at this year’s event:

The Forgotten: Dark discoveries await in the underground vampire realm.

Cell Block Zombies: Vicious crimes resurface from beyond the grave, as death row zombies seek their own twisted form of justice…and your flesh.

Witch of the Woods: Something wicked this way haunts…an ominous legend summons you with her inescapable curse.

Death Water Bayou – Blood Moon: New terrors will stalk the swamp this season – can you outrun the pack?

The Residence: Returning from it’s debut in 2019, this suburban home paints a pretty picture on its eerily quiet street but domestic demons lie beneath.

After experiencing all five of the houses, I would say that three of the five were really great. Cell Block Zombies and The Forgotten would be toward the bottom of the list. Cell Block Zombies was an interesting take on the zombie theme but it had a lot of wide open space with not much going on but the site of that house is also the former site of Insomnia in 2018, which is by far one of the best houses I ever got a chance to walk through. The Forgotten is a perfect example of Busch using the space they have to create a story, but sadly the vampire theme was a bit lost in the setting. For me, though, Witch of the Woods really stands out as one of the best houses I have been in. After a behind the scenes tour the day before, this was one I was looking forward to the most and after going through early in the night I felt like it needed a second trip and boy was that worth the walk. Our first visit as you will see in the video didn’t really have all the scare actors in place, but later in the night, we couldn’t turn around without one giving a good jump scare. Of course, one of the most iconic houses of Howl-O-Scream is the Death Water Bayou. Eight years ago, on my first visit to the event, this house just blew me away. And while I am not normally a fan of reusing the same theme more than a year or two, it still holds up. As for The Residence it still does a great job of being the house to give some of the most scares — it is just a darn good house!

A good scare zone can make or break an event. Houses are something you wait for so you know what you are getting into, but a scare zone is something that guests stumble across. Busch Gardens Tampa Bay has such a large park they have more scare zones than houses. And while they can’t all be scary, they do a great job in making them visually impressive. With returning favorites including the Shortcut, Junkyard, Little Nightmares and Deadly Toys and the three new ones (Voodoo, Skeleton Crew, and In The Shadows), it was hard not to find yourself in a scare zone anywhere in the park. 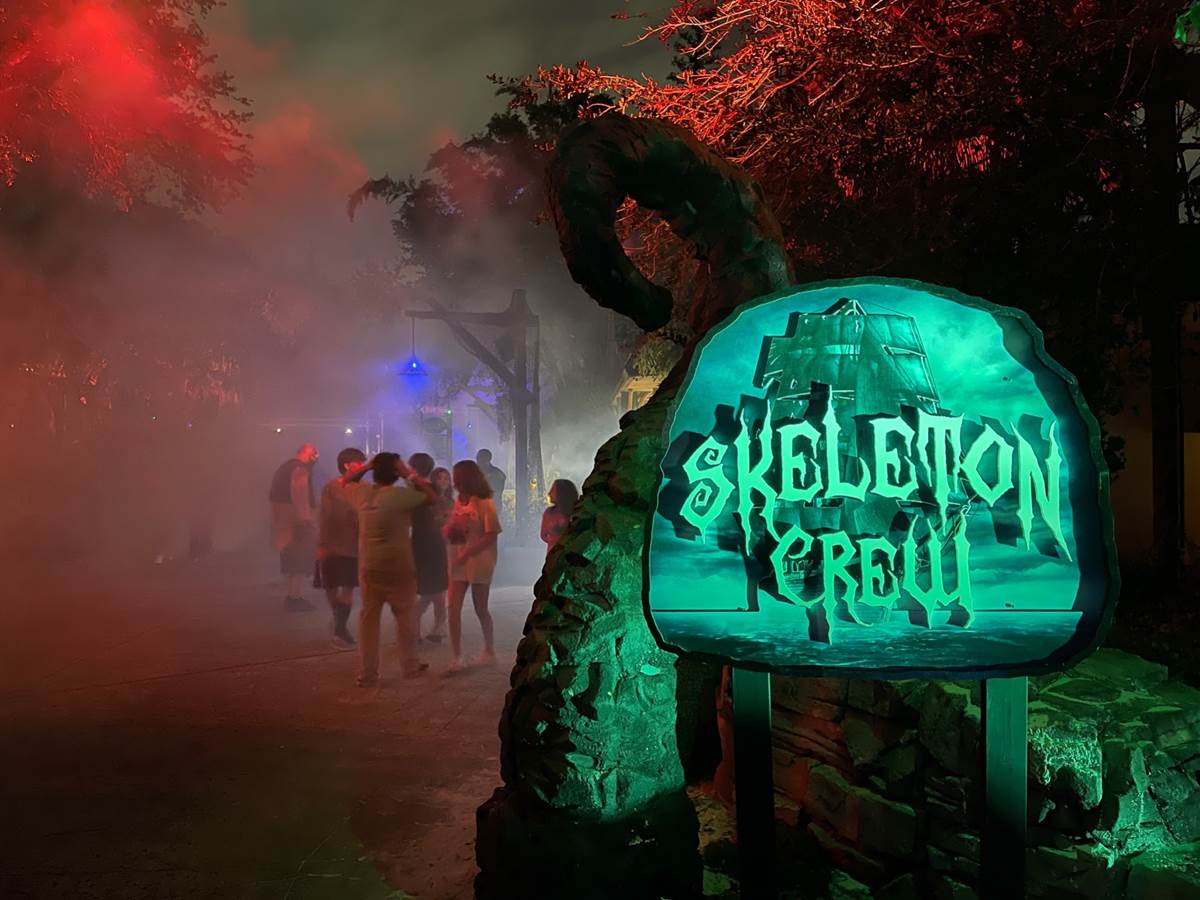 Skeleton Crew: Rising from their watery grave, shipwrecked pirates seek to plunder the world of the living, taking all lost souls as their bounty.

This area had some great spots but sadly was also in such a wide open area there weren't a lot of details to look at before someone jumping out at you. 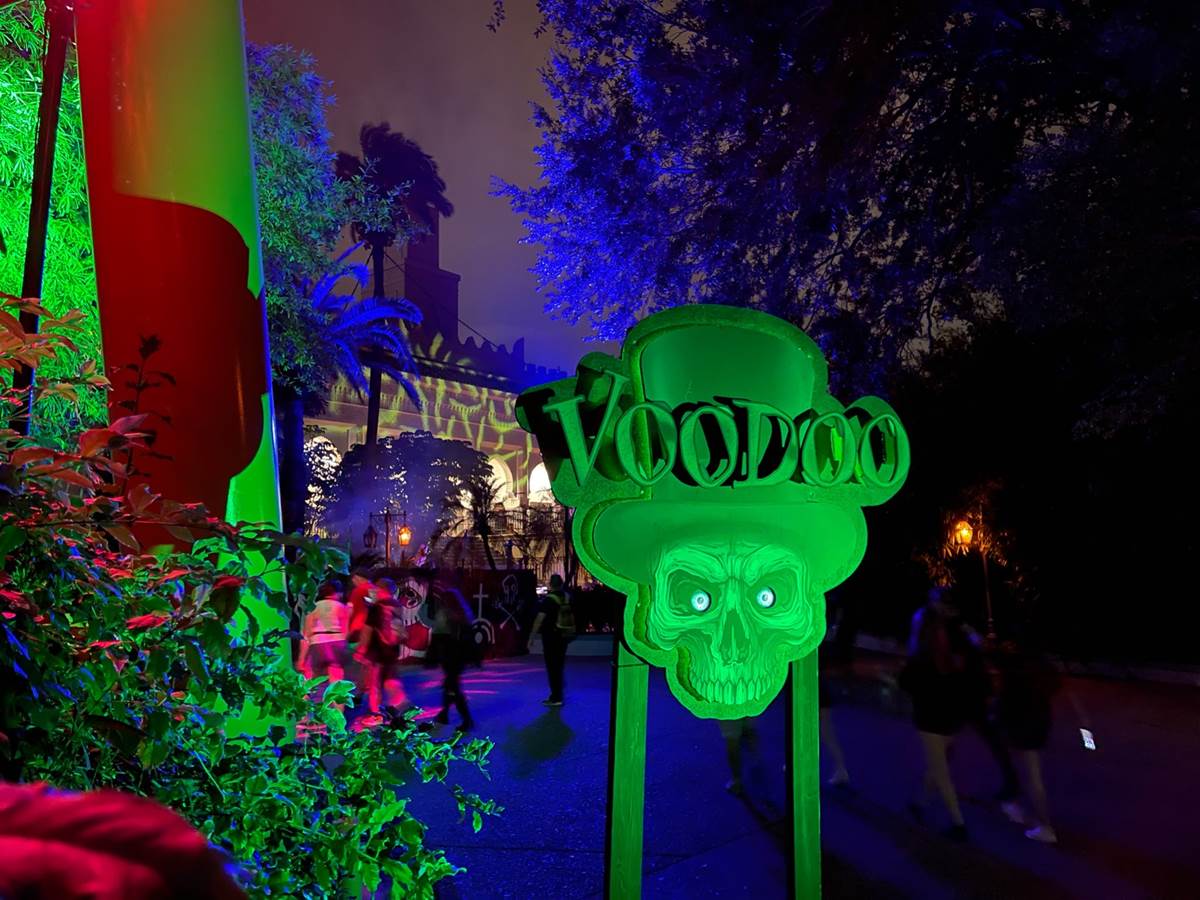 Voodoo: Driven out of the bayou by ravenous werewolves, the witch doctors now practice their dark magic on you as they pursue their twisted revenge through ancient curses.

Voodoo fills the space that Busch seems to set up each year as a very pretty scare zone but, thankfully, it wasn’t all just look this year as we had a couple of good jumps strolling through the area.

Now, overall, I would say Howl-O-Scream Tampa Bay is well worth the trip as it is a unique event with lots of fun. However, before I sign off, I have to showcase two things that I have never seen before. 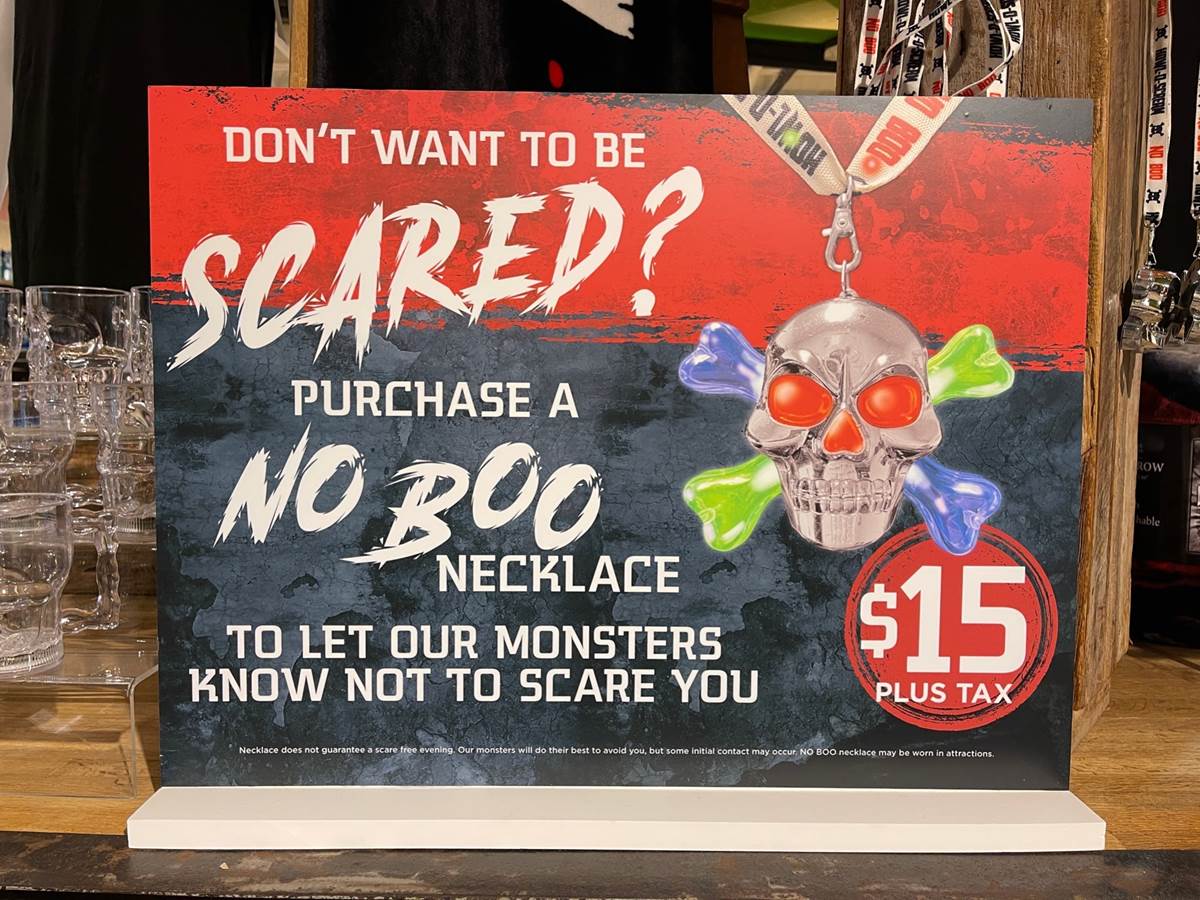 The No Boo Necklace is something I have heard my scaredy cat friends talk about as “wouldn’t it be great if…” So Busch actually bringing it to life is something I have to applaud them for. I for one don’t get the reason to pay to go to a “scary event” and then find a way not to get scared, but I did see quite a few guests (young and old) wearing them throughout the night. 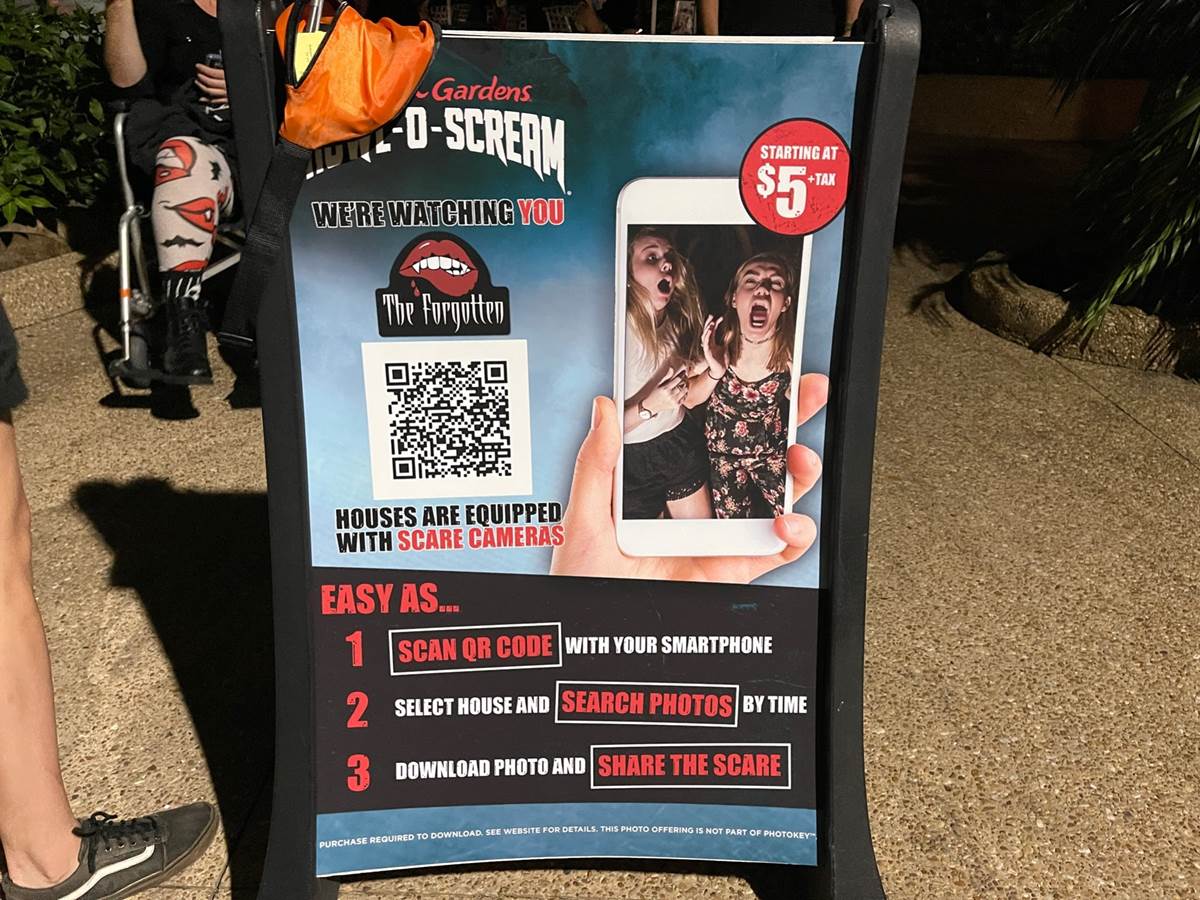 The Scare Cameras idea is something that I never even had a thought in my head about. Having a camera at that one good scare spot without it being a “scream for the camera” thing is ingenious! The only downside is the fright of having to search through all the photos on the page to try and find yours then having to purchase it, but I could see this being a next step idea and in the next few years this being a normal thing.

To sum up…GO TO THIS EVENT. If you have any questions or want to get your tickets head to Howl-O-Scream Busch Gardens and get ready for a night of fun.