It’s summertime, and what better way to celebrate the freedom of summer than to depart on a road trip. In 1995’s Mad Love, Chris O’Donnell and Drew Barrymore go on an unexpected road trip, which could lead to a disaster. 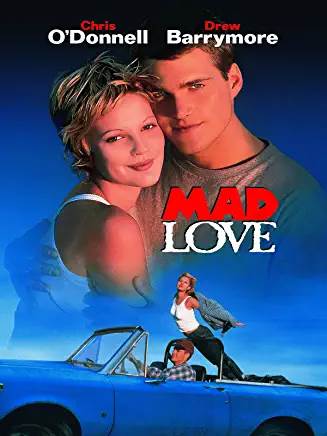 Matt is a good kid, who works hard in school, and does his best to help his dad at home raise his younger siblings. When he meets Casey, Matt is enthralled by the girl across the lake. As they get to know each other, Matt learns that Casey is manic depressive, and thinks that she is being kept in an institution against her will.

After a rather simple breakout, the two set out on a road trip to get away from Casey’s controlling parents. Matt is in love and thinks he can save Casey. As the journey progresses, Matt soon learns that he can’t fix Casey and that she needs real help.

As Casey’s health continues to get worse, Matt knows the lovelorn journey must end. He needs to find a way to get Casey home safely and convince her that things will be different this time.

Chris O’Donnell and Drew Barrymore have chemistry and work well together as they create the relationship between Matt and Casey. It’s easy to like Matt and Casey because of the actors. They bring a fresh outlook for character types that have been used many times before.

Matthew Lillard is great. He lights up the screen, and really plays a different kind of high school friend. Instead of playing the typical stoner friend, or straight A student, Lillard makes his character stand out from a host of similar roles from the decade.

Matthew Lillard did not have enough screen time in this film. There were ample opportunities for Lillard’s Eric to be brought into the story and the audience is at a loss for this. Matthew Lillard should have had more lines and time in front of the camera.

While the depiction of Casey’s illness is a mostly positive representation on film, I am perplexed by some of the choices that Barrymore’s character makes. The scenes of Matt and Casey driving where Casey is bouncing all over the car, whether she is standing up or covering Matt’s eyes are just ludicrous. I just kept saying to myself “Casey needs to sit down and put her seat belt on.”

The parents. I love Kevin Dunn and Joan Allen, but the parents didn’t get enough development to really help the viewers understand their point of view. Jude Ciccolella gets no development, as he plays Casey’s strict father. Is he abusive? Or is he just doing what he thinks is in the best interest of his daughter. Joan Allen is quiet throughout most of the film, but finally gets a chance to be seen when she takes an assertive role when Matt calls for help. Kevin Dunn is left in limbo. His character seems to be a cross between a neglectful father/clueless stepdad. The parents needed more development.

Mad Love isn’t a great film, but it’s not a bad film. There are many redeeming qualities that help the movie survive almost three decades since its release, however this is not a film that anyone needs to watch.

If you are looking for a movie to fill that time on your commute and you are a big fan of Chris O’Donnell and Drew Barrymore, then check out Mad Love.

Mad Love gets a 1 Reel rating. It’s funny, heartfelt, has some problems, but gets its point across without being offensive or degrading.